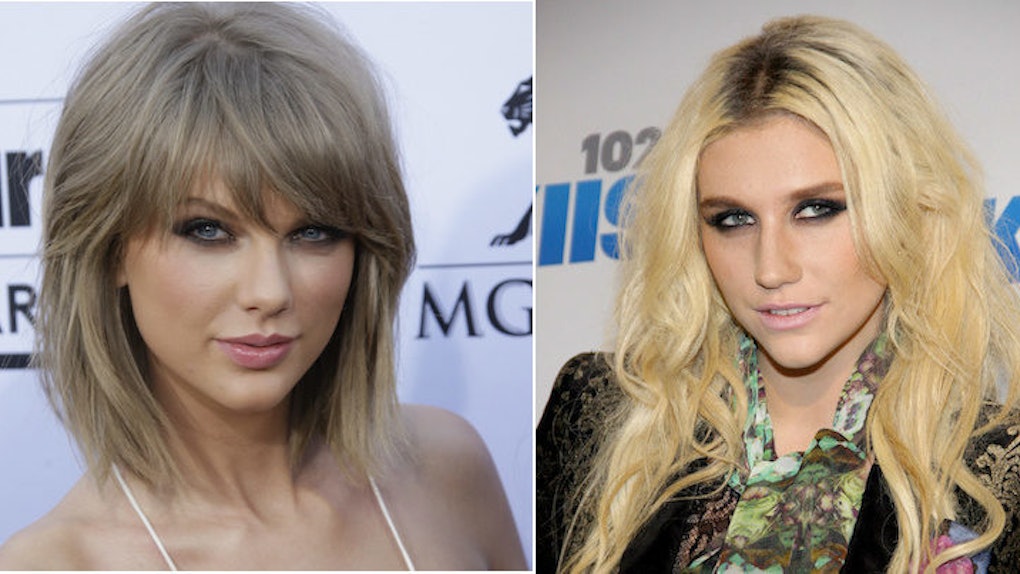 Taylor Swift is the QUEEN of "fuck off" songs, and she proves herself to be year after year.

From her curly-haired "Picture to Burn" days to her edgy "Bad Blood" phase, the multi-Grammy award winner never lets us down when we need a kickass song dedicated to the haters.

You know who else is really, really good at using lyrics to prove a point?

The "TiK ToK" singer has been known for her rebellious IDGAF attitude throughout her music career, even after this year's traumatic industry battle with Dr. Luke.

Based off a recent Instagram photo posted by the 29-year-old songwriter, she's back in the studio and recording with "a casual Grammy award winning secret person."

WHO COULD THAT BE?! HMMM?

Speculation says the culprit is ~the one and only~ Taylor Swift, and the evidence is pretty obvious.

Taylor had Kesha's back this year during her trial by donating $250,000 to be used for financial needs, and now, fans are hoping the two are working together to write a much-needed "FUCK OFF" song.

Also, Kesha did use 13 emojis in her caption, which needs to mean something right?!

Regardless, people are pretty excited.

Kesha and Taylor working together would be such a slap in the face to so many people and with their combined lyric ability — Amelia Saleta (@ASaleta) September 11, 2016

Plus, as BuzzFeed pointed out, Taylor's headphones from an old IG photo are the same ones Kesha is wearing in her most recent post.

Check out the headphones next to each other.

Whether or not this all just coincidence, fans are already crossing their fingers the dynamic songwriting duo releases a collaboration.

I know I'll be patiently waiting for the hit.

Citations: People Think Kesha And Taylor Swift Are Recording A Song Together (BuzzFeed)