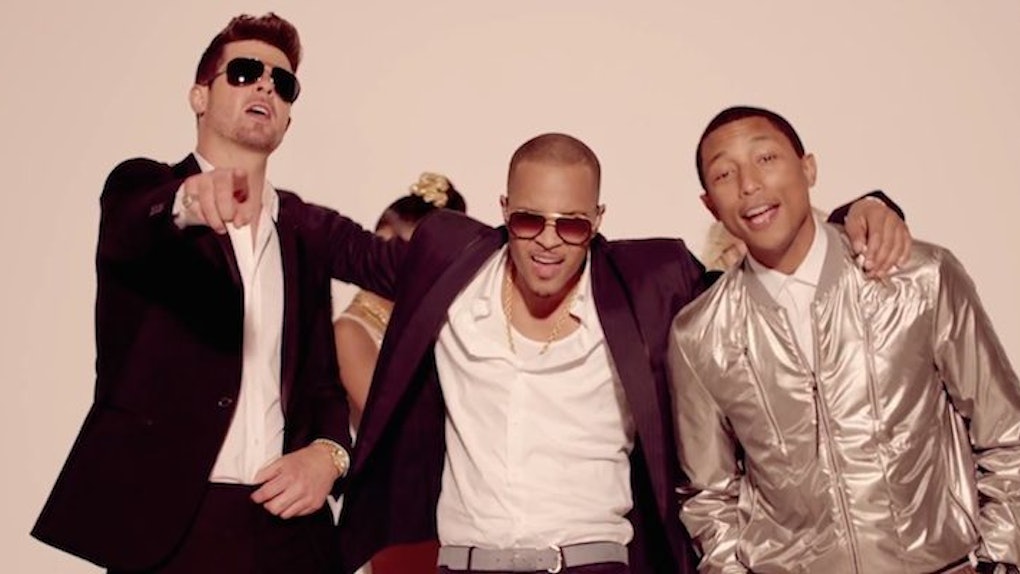 Blurred Lines: 11 Songs That Blatantly Ripped Off Other Artists' Tracks

They say imitation is the highest form of flattery, but sometimes, it can go too far. Sometimes, it stops being flattering and starts being copyright infringement.

This was the case in yesterday's decision against Robin Thicke and Pharrell Williams in regards to their song "Blurred Lines."

Thicke and Williams have been ordered to pay Marvin Gaye's family $7.4 million for copying Gaye's 1977 hit "Got to Give it Up."

The music industry has long been a place where reappropriation and reuse have run rampant. Most of the time, it's not even frowned upon.

Sampling is a vital part of creating music today, especially when it comes to hip-hop and EDM. But, there are definitely times when it crosses the line and just becomes blatant theft.

It might be hard to realize at first, and it's certainly hard to prove in a court of law.

The "Blurred Lines" case is something of an anomaly, and it will be interesting to see what kind of precedent it sets for the music industry moving forward.

Still though, there have been many instances of musical thievery that are almost impossible to deny. Here are 11 of the most egregious examples:

The percussion and the bass line from this ubiquitous early 2000s hit were lifted from Iggy Pop's "Lust for Life."

That song was actually a ripoff of The Supremes' "You Can't Hurry Love," so this one has a long legacy of theft and deceit.

2. "Girlfriend" by Avril Lavigne is a lazy retread of The Rubinoos' "I Wanna Be Your Boyfriend."

I don't think anyone would accuse Avril of being super original in any respect. She's just a run-of-the-mill pop singer who decided to put on a little extra eye liner.

But, she barely even tried to cover up this one.

She changed "boyfriend" to "girlfriend," and just like that, she had a hit song on her hands. She even stole the "Hey, hey, you, you" part, which is just shameless.

3. Sublime's "What I Got" is a carbon copy of The Beatles' "Lady Madonna."

This one's a little harder to catch because Sublime's song uses guitar and The Beatles used a piano, but it is definitely the same chord progression, especially in the early part of "What I Got."

Naturally, the lyrical content is vastly different, but that's mostly because Sublime can't hold a candle to The Beatles. I guess if you're going to steal, steal from the best.

4. The Strokes' "Last Nite" is just like Tom Petty and the Heartbreaker's "American Girl."

The intros to both of these songs are almost identical, and The Strokes won't even deny it.

In an interview with Rolling Stone, Julian Casablancas literally said he ripped off Petty's hit song. Petty said it didn't bother him. At least these guys are honest about their pilfering.

Oasis has long been known as a band full of unrepentant music thieves.

This might be the most audacious example, but the band also lost a lawsuit regarding the theft of The New Seekers' "I'd Like to Teach the World to Sing" for the song "Shakermaker."

Basically, the Gallagher brothers are terrible people, if that wasn't already abundantly clear.

6. Radiohead's "Creep" owes a great deal to The Hollies' "The Air That I Breathe."

This one pains me because "Creep" is one of my favorite songs of all time. But, the similarities between these two are undeniable.

Though, in Radiohead's defense, the band did add a whole lot of self-loathing, and that iconic guitar crunch is completely original.

7. Arcade Fire's "Keep the Car Running" sounds eerily like "On the Dark Side" by John Cafferty & The Beaver Brown Band.

It's pretty clear "Keep the Car Running" had a healthy dose of inspiration from "On the Dark Side."

In this case, Arcade Fire improved upon the song they stole from, so I'm not too upset about it. Though, it's more than a little obvious both of these bands borrowed heavily from Springsteen.

It's pretty incredible The Offspring became a successful band.

Their songs are mostly punk-pop pieces of sh*t. I guess one way to make sure a song of yours is a hit is by stealing from The Beatles. Good work, Offspring.

9. Nirvana's "Come as You Are" sounds suspiciously like Killing Joke's "Eighties."

The guitar parts in both of these songs are pretty much exactly the same.

It's unfortunate because "Come as You Are" is a great song, but, as we're starting to see, many great songs are built on the shaky foundations of questionable ethics and plagiarism.

10. Coldplay's "Viva La Vida" borrowed quite a bit from Joe Satriani's "If I Could Fly."

Coldplay is one of the biggest bands in the world. Joe Satriani is one the greatest guitarists you've never heard of. So, you could see how Coldplay bandmates thought they would get away with this one.

But, the Internet sees all. Besides Satriani's excellent guitar solos, these two songs have too many similarities to just be a coincidence.

Side note: The video for "Viva La Vida" is all kinds of awful.

11. Kelly Clarkson's "All I Ever Wanted" has the same exact beat as Spoon's "I Turn my Camera On."

The beat to Spoon's "I Turn My Camera On" is amazing, almost iconic (at least in my book).

So, it's no wonder Miss Independent stole it without batting an eye.

It's just a shame because sh*tty pop music really couldn't survive without the labors of more musically gifted yet lesser known artists like Spoon.