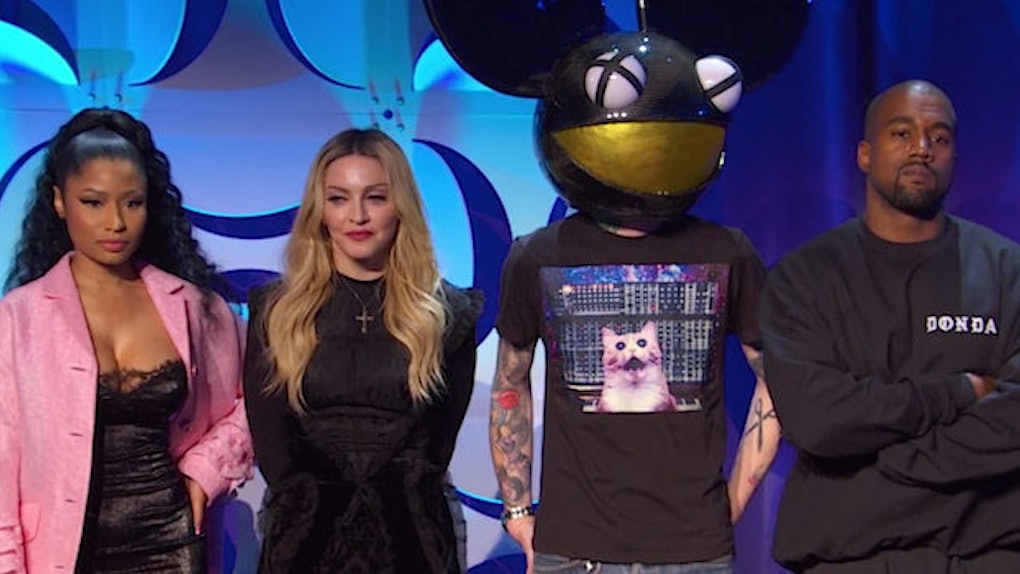 Why The Music Industry Is Joining Together To Fight Spotify

Shawn Carter, more commonly known as Jay Z, is not a businessman; he's a business, man.

And now he's trying to change the very fabric of the music business.

Who does music belong to: the fans, the artists or both?

This question is at the center of an ongoing debate in the music industry, and Jay Z believes he has a solution.

He did so alongside musical powerhouses from a wide array of genres: Kanye West, Jason Aldean, Daft Punk, Rihanna, Madonna, Nicki Minaj, Jack White, Arcade Fire and, of course, Beyoncé.

Tidal is the first artist-owned streaming service ever. Alicia Keys, who spoke at the launch event, stated Tidal would "forever change the course of music history."

The question that remains is whether it's changing it for the better or worse. Jay Z and the artists who've joined him are taking direct aim at streaming services like Spotify, which has around 60 million subscribers.

Back in November, Taylor Swift generated controversy when she pulled all of her music off Spotify. She did so because she felt she and other artists don't get fairly compensated for their work.

Spotify offers free service to customers, but plays ads in the process. The hope is that these ads will be annoying enough to inspire customers to pay for premium service.

Artists are compensated each time their songs are played on Spotify, but it usually comes out to less than one cent per play. This is often attributed to the fact that Spotify, because of the free option, doesn't bring in as much money as it potentially could.

With that said, musical superstars like Swift still have the capacity to make around $425,000 per month through Spotify.

Tidal only offers subscription service. It's the most expensive streaming service available. In this sense, Tidal is arguably more for the artists than the fans. More money means a bigger payday.

Consequently, some people have already begun accusing Tidal of being a platform for greed rather than musical integrity.

In a world full of online piracy, this may not be a very fair argument. Musicians put a lot of passion and hard work into what they do, and they bring joy and entertainment to millions across the globe. All the while, countless individuals download their work illegally.

Yet, it's also true many musicians still rake in millions of dollars every year.

And it's no secret the artists behind Tidal are some of the most successful and wealthy individuals in the music industry. Do they really need more money? This seems to be the question many people are asking, and it may lead them to stick with Spotify.

I dont understand what all these superstar artists think they're revolutionizing with #Tidal. They stand for greed, pure and simple. — Tom W (@twarson) March 31, 2015

I'm all for artists getting paid. But this tidal just seems like greed to me. Especially when those artists r already raking it in. — Hayz (@Hayley_LFC) March 31, 2015

I'm not supporting #TIDALforALL Tidal is lead by GREED! It's not about the fans at all — Insane Smitty (@Insanesmitty) March 30, 2015

Regardless of how you feel about Tidal, it might very well be the way of the future.

Jay Z is an extremely influential person within the music industry, and this should not be underestimated. He could sway more and more artists to stand behind Tidal and abandon services like Spotify.

But it doesn't seem like all musicians are seriously concerned with receiving full compensation for their work.

You want people to f*cking listen to your music? Give them your music. And then go play a show. They like hearing your music? They'll go see a show. To me it's that simple, and I think it used to work that way.

With the debate surrounding musical ownership occurring both between the artists and among the fans, it's apparent Tidal won't change things immediately.

In addition to Spotify, it also has YouTube, Pandora and piracy to contend with in terms of streaming.

Whether or not this Tidal wave will grow or recede remains to be seen, but Jay Z has certainly taken a bold step forward.