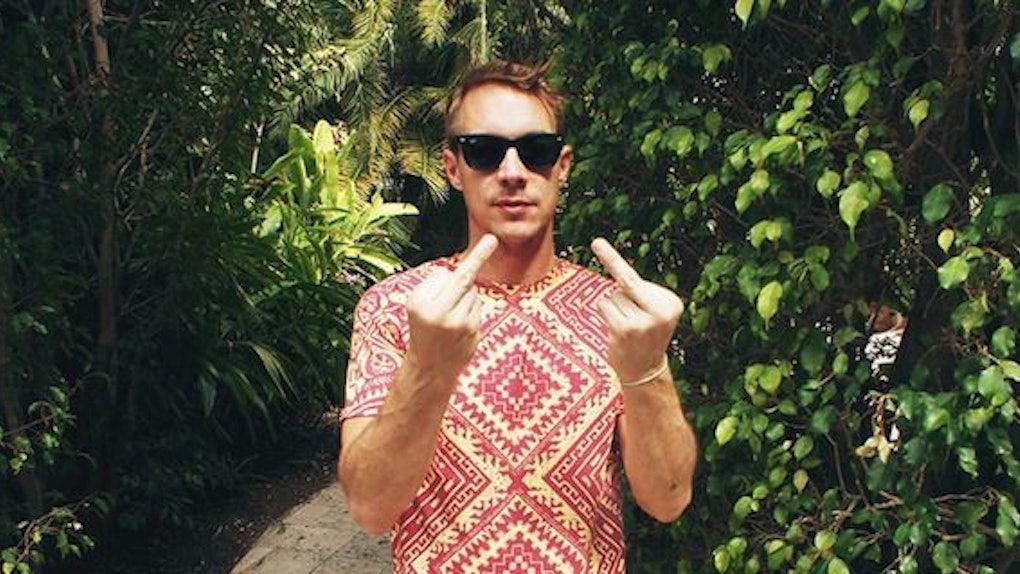 Most of us know Thomas Wesley Pentz by his stage name, Diplo.

At the moment, Diplo is one of the most balling celebrities on the face of the earth.

He's been a world-renowned DJ for quite some time, and he shows no signs of slowing down anytime soon.

If you're not a fan of Diplo or aware of how much he balls the f*ck out, here are a few reminders of why he's one of the most badass (if not the most) DJ's in the world.

He Made The "Paper Planes" Beat

Diplo had been DJing for quite some time before he met MIA. The two musicians worked together on a few songs, including the Grammy nominated "Paper Planes."

The song essentially launched him into superstardom as a DJ and producer.

And The "Slight Work" Beat

Diplo's producing credits are a lot more extensive than most people realize. He's made beats for Beyoncé, Usher, Chris Brown and other big-name musicians.

One of his best came off of Wale's second album, Ambition. A crazy Diplo beat plus Big Sean and Wale rapping over it equals a definite club banger.

With Major Lazer, Diplo has had the opportunity to work with celebrated dancehall and reggae artists, like Elephant Man and Vybz Kartel, who is featured on the Major Lazer jam "Pon de Floor."

Major Lazer is also responsible for the tracks "Watch Out For This (Bumaye)," "Bubble Butt," "Original Don" and the recently released, "Lean On."

He's The Brains Behind The Mad Decent Label

Recently, Diplo decided the Block Party was not enough and introduced the Mad Decent Boat Party. It looks like one of the best parties someone could attend.

If you've never heard "Express Yourself," you probably haven't gone out in the past couple of years. You're also really missing out.

"Express Yourself" is definitely Diplo's crowning achievement and the ultimate party starter.

"Express Yourself" is all about girls expressing themselves through the art of the twerk dance. It may seem strange for an EDM DJ to be someone who promotes twerking, but Diplo is all about it.

I mean, his name is Diplo; it's similar to the way girls dip down low while twerking.

There are only a few celebrity Instagram accounts worth following. Most of them consist of a bunch of douchey pictures showing off how rich they are. Diplo, on the other hand, just uses his to crack absurd jokes.

And, You Won't Be Disappointed If You Follow Him On Snapchat

His Snapchat stories are equally as hilarious as his Instagram account. It also gives his fans a sense of how dope of a dude he actually is.

In 2014, he released a compilation album titled "Random White Dude Be Everywhere" as a joke about how he seems to be always be on the move around the world.

The joke has some truth to it though; Diplo is known for his extensive touring.

Diplo And Friends Is One Of The Best Playlists On Spotify

Diplo's Diplo and Friends playlist on Spotify features tracks from a bunch of Mad Decent artists and some of his other favorite songs.

You might be surprised when listening and learning what kind of music Diplo likes to listen to.

His 2014 NYE Concert Was Insane

To bring in 2014, Diplo headlined an epic concert in Madison Square Garden. Rudimental, Yellow Claw and A$AP Ferg all performed and Diplo closed the show with a set with Skrillex as Jack Ü.

Jack Ü Is An Awesome Side Project

Diplo and Skrillex recently started a side project called Jack Ü and just released an album about a month ago.

The duo has some songs that we'll be partying to for a while, including "Febreze," "Beats Knockin," "Jungle Bae" and "Take U There."