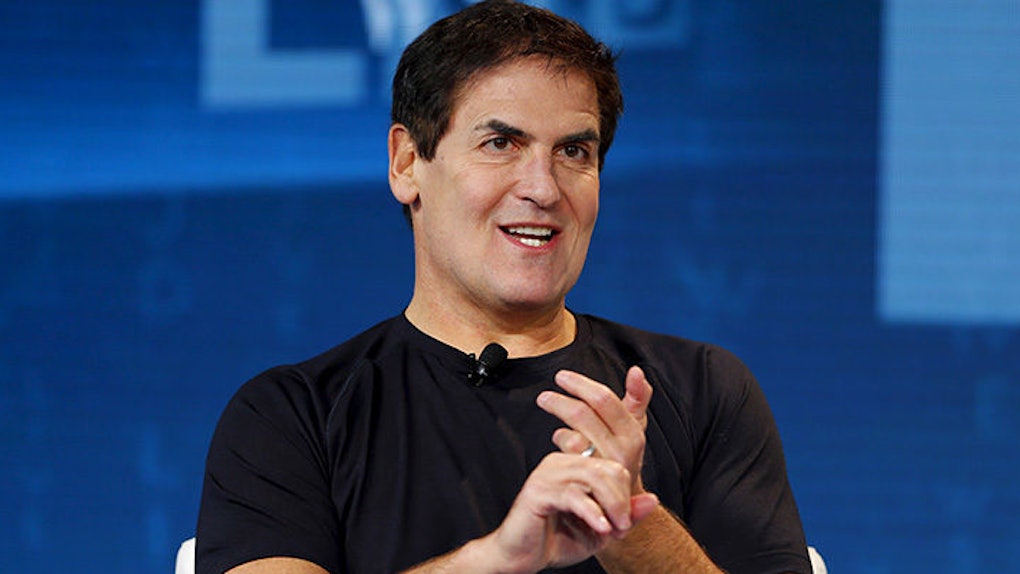 The Five Cardinal Rules Of Starting A Business, According To Mark Cuban

Beyond being a successful businessman, Mark Cuban has made a name for himself by flourishing in a number of different roles. He's the eccentric, title-winning NBA franchise owner, the one whose play-by-play reactions off the court are sometimes just as entertaining as the action that is actually on it.

He's one of ABC's Friday night personalities, the "moderate" Shark in the tank, if you will (not too harsh but not too nice). He's also a natural investor but, when asked how he likes to be described, he always returns to his roots.

It's clear, through his many interviews, that Cuban not only loves being an entrepreneur, but he also loves to talk about being an entrepreneur. And, if you listen closely, you might just gather that there are distinct do's and don'ts by which Cuban lives. Luckily for you, we've done all the listening for you, and now all there is to do is read on, to this list of the five cardinal rules of starting a business, according to Mark Cuban.

If you've made the decision to dip your toe into the world of entrepreneurship then, while you're at it, you might as well put away any idea of having an excuse for coming up short, Cuban says.

There might be room for hesitation before you've thought about building that company, but once you've brainstormed, you're already in too deep. If there's one thing that keeps you from bridging dreams to execution, it shouldn't be a poor excuse.

"I'm just not big on excuses. Everybody has that opportunity to go for it, they've just got to do it."

Speaking of excuses, one that might be tempting to use is your lack of ability to find a good loan, but that might not be such a bad thing according to the Dallas Mavericks' famous owner. In fact, Cuban says that it'd be foolish to sign your soul away for startup money in the first place, as it would just lead to one more complication on a journey that is sure to provide enough of them.

"First of all, if you're starting a business and you take out a loan, you're a moron. Right, because there's so many uncertainties involved with starting a business, yet the one certainty that you'll have to have is paying back your loan. And the bank doesn't care about your care business or whoever you borrow from, unless it's family, doesn't care about your business. And so it's just a complete conflict."

You might think that Cuban is delusional for proposing that young businessmen and women could be just fine in starting companies, essentially, without investment, but -- how shall we put this -- Mark Cuban simply knows better than you, me and probably every other adviser you have. Besides, money isn't even the straw that stirs the entrepreneurial drink, he argues.

Treat It As A Sport

If it hadn't been made clear by his celebration during the 2011 NBA Finals, or his numerous bids to purchase franchises in other leagues, like the Chicago Cubs and the Pittsburgh Penguins, perhaps then we should remind you: Mark Cuban loves sports.

Even further, Cuban loves the idea of marrying sports with the other area of life that has captured his infatuation, entrepreneurship, as he explains why businessmen and women ought to capture the competitive spirit that pushes many of the world's most successful athletes.

"I'm just the most competitive guy that you'll ever meet. To me, like you were saying, business is a sport and I just have always got to be competing, I've got to always try to win," he told famed life coach Tony Robbins on CNN, before getting into just how wide open the field of competition is. "

"When I got into business, I realized that I wasn't just competing against an opponent for 48 minutes in a game or 60 minutes, you're competing with everybody that ever might compete against you... That's the whole world."

The idea of reaching one's dreams can often be over-romanticized, even for dreams' standards. It's mostly because we hate doing work that feels like work, but if we do what we love, technically, no hard work will be necessary. Right?

Not quite. It's all good and well to talk about your heart's desire, but make no mistake about it. You will have to apply grinding, sometimes unpleasant hard work to your endeavors. There simply is no way around it, Cuban says.

"There's no one set of traits that makes a great entrepreneur, because I think everybody has it in them to be great at something," he said in this video interview. "A lot of people talk about passion and determination when to me it's more about effort. What are you good at, what are you not good at and then putting in the effort to figure out how to make it all work together to create a company."

BUT, It Only Takes One

No matter what setbacks are experienced, no matter which idea fails, you can always come back. In the world of entrepreneurship, you're just one masterstroke away from making the struggle worth it.

"It doesn't matter how many times you fail, you only have to be right one time," Cuban said. "Then everybody can call you an overnight success and tell you how lucky you are."