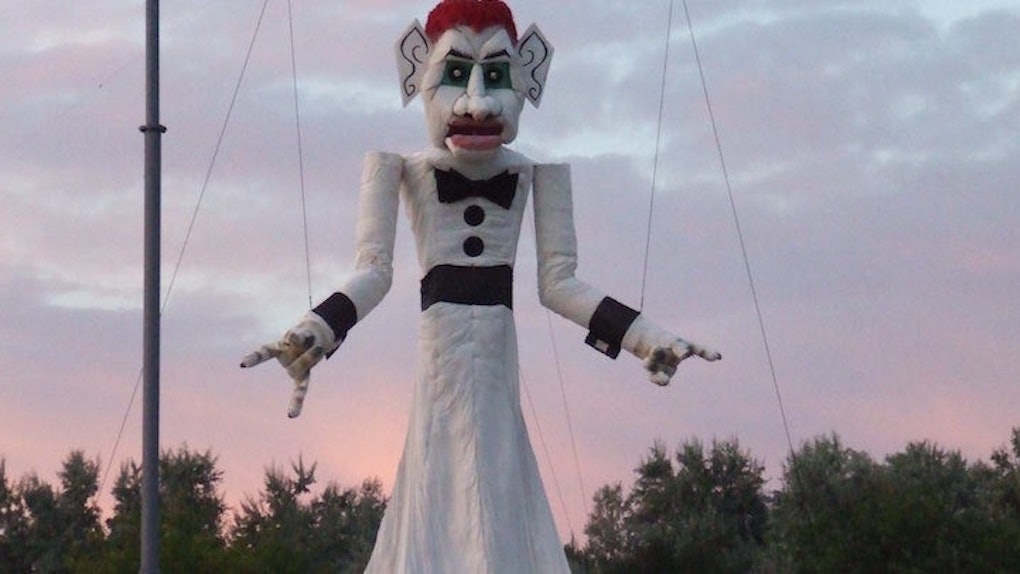 At 50 feet tall, Zozobra is the largest marionette in the United States. He appears only once a year, and he is slightly altered each time, from the color of his hair to the style of his robes.

But the circumstances surrounding Zozobra's presence in a sleepy, south western city have never varied.

Every year in Santa Fe, New Mexico, we burn Zozobra to the ground.

Now, unless you’ve been living under a rock (or without Instagram), a fiery effigy in the middle of the desert isn’t a new idea. Burning Man is in its 29th year, and every year, the festival gets bigger.

It is now a staple event for people wishing to join the counter culture, channel their inner steampunks or, more realistically, party with reckless abandon.

But while Burning Man is a typical wild child of the 80s, Zozobra has 91 years of history and tradition on the Man.

He is a fluid amalgam of cultures, nationalities and religions. Created by Will Shuster in 1924, Zozobra gets his roots from the Yaqui Indians in Mexico. But his ever-changing appearance reflects the dynamic culture in which we currently live.

He is the Man’s older, cooler cousin, the dangerous dark horse of the family. Even his name connotes fear and anxiety; it is the Spanish moniker for “the gloomy one.”

Admittedly, like Burning Man, Zozobra sees his fair share of sin and debauchery. Festivities start before sundown, and last well into the night. Sneaking alcohol through the gates is as much of a tradition as the burning itself.

Every year, there are at least a couple of arrests and more than a few drunken brawls. And as the party takes place in a local sports complex, it is customary to light one up on second base. The revelry exceeds that of any other holiday or celebration seen in the Land of Enchantment.

But the Burning of Zozobra is more than just a party. This cross-cultural tradition exudes meaning and significance for New Mexicans.

For all his ugliness, Zozobra has a special place in our hearts. It is through Zozobra that we get to cast out the ugliness in our own lives and begin anew.

In the weeks leading up to his burning, locals will fill Zozobra's gown with their most worrisome troubles. These include such things as love letters, credit card statements, mortgages and divorce papers. I even heard of a woman throwing in her wedding dress once.

These are souvenirs from a year's worth of heartache. And they all become the fuel that leads to Zozobra’s demise.

When the night itself arrives, an intricate ceremony takes place before the burning. Professional fire performers and school children dressed up as "gloomies” dance around Zozobra.

They encircle the behemoth, recreating the battle between light and dark.

Through loudspeakers, Zozobra’s own voice rages in the night, wrathful and tormented. His hands flail about, trying to smite those below.

The excitement builds and explodes like a firework. Almost 50,000 people can be heard across town shouting,

The fire dancers grow more and more frenzied, holding fast to the beat of drums.

Finally, an eruption seems to come from the marionette himself. Zozobra goes up in flame, his cries of fury and pain adding to the insanity of the night.

It's a party like no other, and it's one that instills hope in its people. They give their pain to “Old Man Gloom” and watch them both burn.

The afternoons were mild, and you could smell the green chile roasting all over town. School had started, but there was still a sense of possibility in the air. Anything could happen.

The Burning of Zozobra was always my New Year’s Eve. It was the only night of the year when I could look back and say, yeah, that sucked.

But, I could write down all the BS, fold it up in a little square and give it to someone else to deal with. It was the best kind of therapy.

As Zozobra caught fire and fell to the ground, I stood shoulder to shoulder with people I had known since birth. Beyond them, I felt surrounded strangers who were nonetheless family. And I knew everything would be okay.

I could set fire to my problems, my worries and my woes. I could scream them away into darkness. I could watch as they joined the night sky, and disappeared into ash and stardust.

This year, Zozobra took place on September 4. And although my problems had changed, I went into the event as I always have, as all new Mexicans have: ready to party, ready to light something on fire and ready to start over.