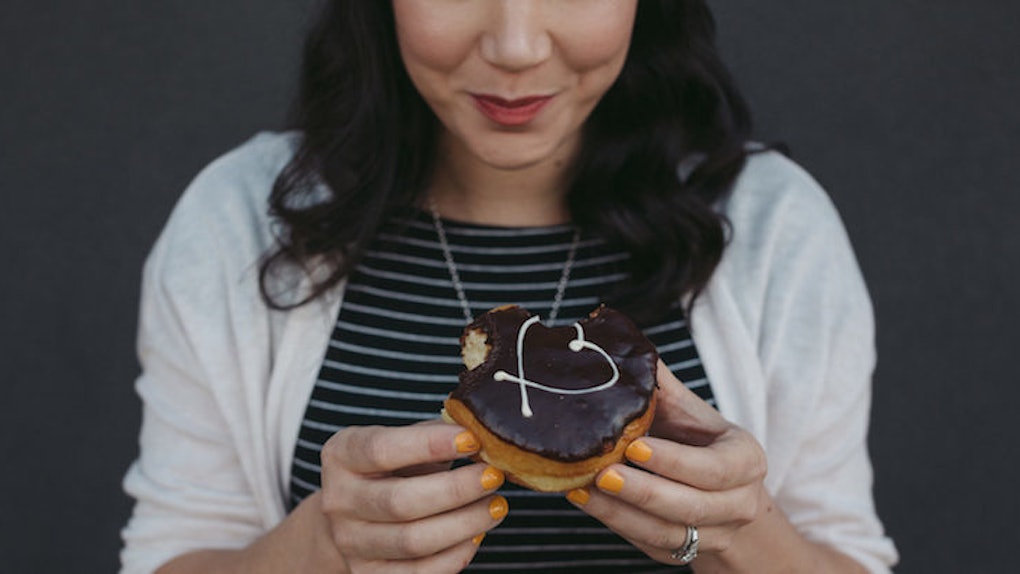 As Halloween creeps up on us, there's candy everywhere.

Between the fun-sized Snickers bars, bags of candy corn and pumpkin spice lattes, we're all getting our sugar fix... or are we?

Think about it: How often do you hear a guy say he's desperately craving chocolate? We don't want to say it never happens, but more often than not women are the ones with the sweet tooth.

We know you chocolate-loving guys are out there, but 40 percent of women report craving chocolate, while only 15 percent of men do.

Seriously, what's the deal with women and their sugar? We decided to get to the bottom of it.

It might have to do with the way a woman's brain works.

Ladies, we know most of you have been there: It's the week before your period, you're in a sh*t mood and all you want to do is buy an enormous bag of Reese's Peanut Butter Cups and multiple pints of Ben & Jerry's Phish Food and eat it all while watching "Gilmore Girls" reruns.

OK, so maybe it's not always that extreme. But as Dr. Julia Hormes told The Huffington Post,

Half of the women [in the US] who crave chocolate say they do so right around menstruation.

While there's not a ton of research to back up the idea that chocolate cravings and PMS actually go hand in hand, there is some evidence that dopamine (the "happy" chemical) is released in a woman's brain when she eats chocolate.

On top of that, chocolate may have an impact on the amygdala, which regulates sex drive.

We can't say we hate the idea of eating more chocolate in the name of having better sex.

It could go back to caveman times.

Women and men having different taste buds could also go back to the roles we all played in the good old days (aka caveman times.)

Back then, men were responsible for hunting, while women were the gatherers, which could explain why men tend to put their focus on meat over sweeter foods.

Men and women have differences in physiology, which might have to do with [early] access to different kinds of food.

So if you're tired of your guy ordering steak every time you go out to dinner, go a little easier on him. It's not his fault -- blame it on the caveman.

But it most likely has to do with the way we're socialized.

While there's some research backing the idea that women just inherently like chocolate and men like meat, this difference in taste buds probably has more to do with gender stereotyping.

A recent study found the way a food is packaged has a huge influence on which gender is eating it. For example, if a package of muffins has the word "petite" on it, forget it -- men won't touch it.

As Doctor David Bell, author of Consuming Geographies: We Are Where We Eat, told The Guardian,

The story we tell to understand the world and our place in it. We're living in a culturally rich time, and are more than able to divide food into categories, including one for 'food that people like me eat.' So, men don't eat steak because they are men, men eat steak to show they are men. Women aren't hard-wired to crave dessert -– we've learned that women crave dessert, so we follow, mouths open. It's comforting... It's reassuring when we make sense of things.

And as Hormes pointed out to The Huffington Post, the I'm-PMSing-And-Need-Chocolate-Thing is probably just a social construct. How many commercials or movies show women coping with their breakups or periods with chocolate?

Yep, the messages our culture sends probably have a lot to do with it.

Listen, we're not trying to come between you and your chocolate.

But the next time you decide you need chocolate because you are a woman going through a hard time, ask yourself: Do you really need it, or did our culture condition you to need it?