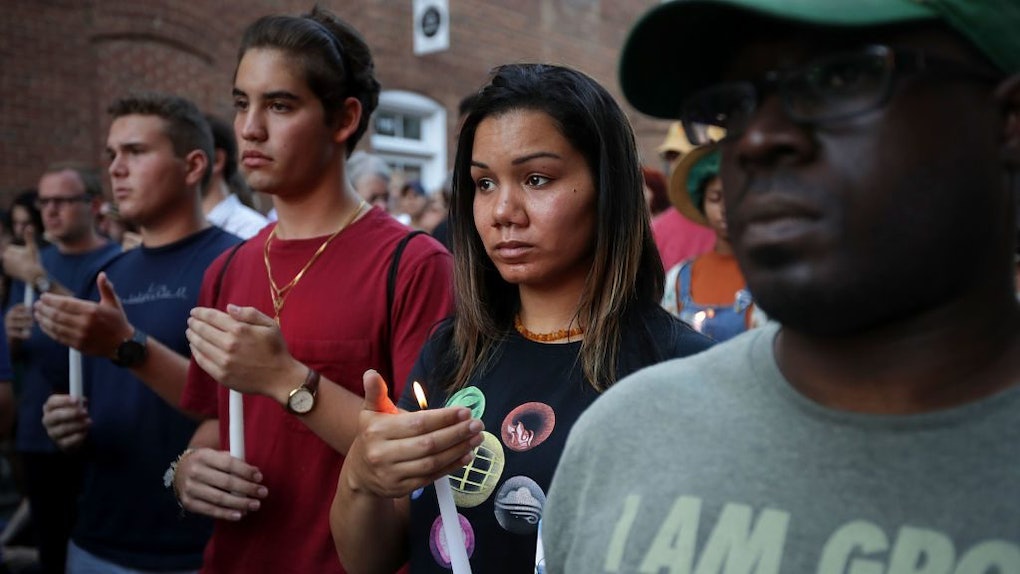 Black Women In Charlottesville Are Not There For Your Comfort

This weekend, on Saturday, Aug. 12, white nationalists gathered in Charlottesville, Virginia for a “Unite the Right” march. Social media flooded with images of neo-Nazis marching through the streets, lit torches in hand. A picture of counter-demonstrators, 17- to 23-year-old students at University of Virginia, went viral via the hashtag #Charlottesville. As the events of the weekend unfolded, getting continually worse with each update, a troubling rally cry began to catch on, and it centered on the black women in Charlottesville.

It began where all things do: on Twitter. Early on Saturday, the Women's March tweeted, “The face of domestic terror has always looked like this. Now, more than ever, we must follow the lead of women of color. #Charlottesville.” It was a sentiment others also took up on platform, through tweets such as, “Black Women Warned You," and “You Persisted.”

To the rest of white America, and the wider public caught off guard by this past weekend's events, the notion of safety within the wisdom of black women was a welcomed relief. It symbolized an easy and readily available "out" during a tumultuous period: Black women will, once again, lead the way. They'll teach us. However, for the black women in question, women like myself who have faced white “nationalism” and its consequences since birth, there is no relief to be found. Instead, there's only the familiar expectation of labor and sacrifice for the benefit of white America, the sum of our entire purpose.

The tweets, and the sentiments they capture, are often excused because of their presumed good intentions. The argument is that non-black women are doing what black women always asked, by recognizing our labor and pushing us to the forefront of change. But transforming us into superhuman figures and electing us as martyrs of a movement without our say is not engaging with us as people. It is a method of dehumanization just as toxic as any other, following in the lines of tropes like black women as mammies. To elect black women as sacrificial figures during times of tragedy when you are most afraid is speaking to the belief that black women don't feel (also perpetuated by the same mammy caricature). There is no way black women can be afraid, while we recount generational trauma, and who cares if black women are? There is already the harmful stereotype that claims black women process pain differently, feel it less intensely. It's why we're referred to as “strong black women.”

Exploring the dehumanization of black women is not new. Last year, writer Mikki Kendall started #NotYourMule as a way to address entitlement toward black labor within the media and film industries. Zora Neale Hurston, Alice Walker, and Toni Morrison are all prominent figures who have touched on the [dehumanization of black women through entitlement to our mental, physical, and emotional labor.

It's true that black women warned others, because we have been living this reality for generations. While social media was astonished by images of white supremacy boldly displaying itself in the middle of America's streets, it was not news to black women. Warnings have come from essays, books, and larger media, but they have also come in anecdotes passed down from relatives. My grandmother grew up in rural Georgia; she told me stories of her father receiving warnings that the Klan would ride. “He would make 'friends' with police, Klan members, so they'd let him know. They would tell us to stay inside and he would stay up with a shotgun, with his rifle,” she said, looking at me with a warning in her eyes.

Almost 15 years later, my grandmother now knows that, on nights when there are protests, she can turn on the news and find me there.

On Aug. 9, three days before terror struck Charlottesville, my newsfeed was caught in a familiar state of trepidation while friends I met in, or because of, Ferguson reflected on the night that ultimately changed everything. Two days later, on Aug. 11, the documentary of the Ferguson uprising, Whose Streets?, was released. The week had been one of mourning and remembrance for black women and our communities before Charlottesville caught national attention. The black women in my own city were not caught off guard by images of violence we saw at Charlottesville because we had dealt with two occupations within our state in response to police brutality.

The calls to action that came in response to Charlottesville, which rests on volunteering my labor and health, are nothing but slaps in the face. I have been in this movement since I was 19; I'm only 22 now, and I've been tired since I began. There is nothing shocking about what happened in Charlottesville this weekend, but there is unrecognized trauma in constantly screaming at figurative brick walls. It's exhausting to continually scream the same battle cry, only to be heard when it's convenient for others. There is an unwillingness to dive into the greater obstacles that black women have to deal with when they organize, such as the response we are met with from police. I've had police in jail rip my hijab so strongly from my head that it tangled and started choking me; I have lost out on housing because of misdemeanors from protests. For three years, I've warned people through Facebook and Twitter; I've stood on steps at rallies; I've watched my friends do the same, all while ridiculed and threatened, and yet nobody listened. Because nobody else was afraid.

White women can recognize the lived experiences of black women without placing a burden of responsibility on us. You can recognize this scholarship without looking for relief within the legacies of our pain. Black women warned you because we've hurt before. But recognizing our warnings also means engaging with them. Tweets like the ones I quote in this article that encourage you to "listen to black voices" serve no purpose, other than to alleviate others of their discomfort. Listening to black women once again places the burden on black women. To engage with warnings, you have to sit in and acknowledge the discomfort. Most importantly, you have to be prepared to hold yourself and your own communities accountable for any harm they've caused. We as a society cannot place the burdens of dismantling white supremacy on the shoulders of black women, where it does not belong.

The reality is that black women will not save the world from racial inequality and we are nobody's sacrifice. To engage honestly with our work, and our experiences, means to interrogate your role, not just within the anti-racism movement, but also within racism as a whole. In order to understand what position white men and women need to take in dismantling a structure, you need to understand how you support it. White supremacy found its footings in the development of global anti-blackness, through removing black people of their attachment to land and humanity, and it continues to prosper because of misogynoir, the specific dehumanization of black women.

Everyone has a stake here.

Charlottesville is not the first example of white supremacy rearing its head in this year and it will not be the last. Moving forward, it's up to everyone to acknowledge their fear and discomfort without electing another oppressed group to take the brunt of the beating for them. Black women have been leaders within anti-racism movements and we will continue to be, but we will not be beckoned forward only when it is convenient. It's time to fully invest in dismantling white supremacy, and the misogynoir that upholds it.