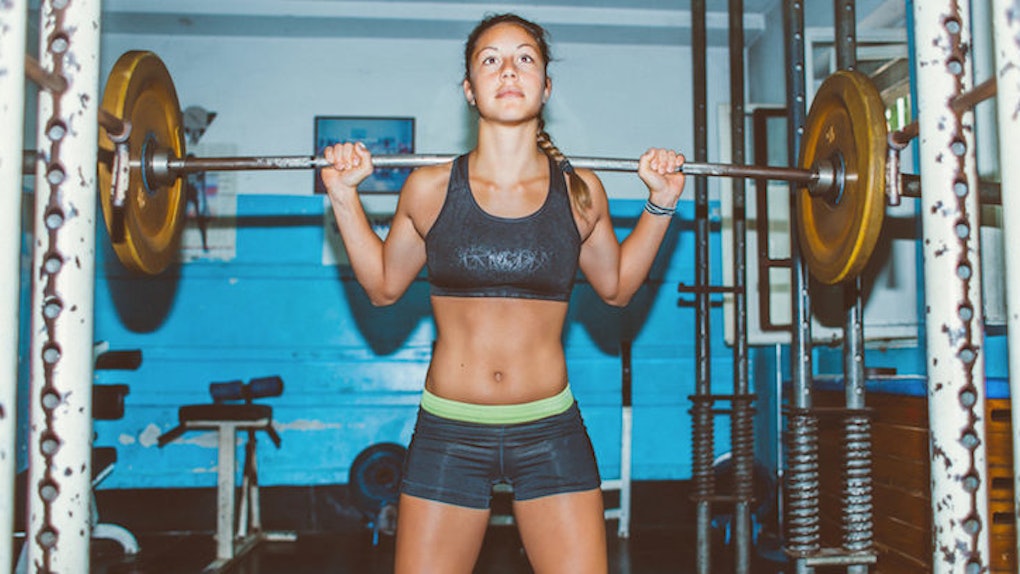 When a woman first dipped her toes into the weightlifting world, she was told she would become three things: muscular, masculine and, my personal favorite, strong.

Women were perpetually told to stay out of the weight room, as if being a muscular and strong were attributes they just weren't allowed to have.

In actuality, your waist gets smaller, your ass gets bigger and your legs get firmer when you start lifting. Your body basically becomes the epitome of every rap song, and your confidence skyrockets.

As of 2015, a woman sporting an Ivy League degree with quad definition is considered to be irresistibly sexy.

Just take a look at the Instagram of Brooke Wells, who just recently placed 16th in the CrossFit Games at only 20 years old. Her athleticism took the nation by storm, and the CrossFit community couldn't get enough of her phenomenal muscular curves.

When you Google "why women shouldn't lift weights," you get thousands of articles listing reasons as to why women should start lifting weights and working out daily.

Some of the most feminine and beloved women in the game are flaunting their athletic physiques, including Queen Bey, Rihanna and even J Lo. Who knew muscular biceps could look so flawless?

Instead of pressuring women to skip meals to look like these celebrities, society is hiring personal trainers and creating workouts in order for people to look more like these sexy and strong ladies.

The Kardashian clan has even jumped on board the health and fitness bandwagon (with a touch of glamour, of course). Khloe Kardashian just did a fitness-themed spread in Complex, showing off her unedited body she earned in the gym. (She even gave a shoutout to her "troll haters" on Instagram.)

Fashion lines for athletic wear are coming out left and right, and even companies like Urban Outfitters are supporting active lifestyles.

We can't deny it; as women, we are casually taking over almost every aspect of society as we know it.

These are some of the many reasons why you should love your beautiful, strong, muscular body:

1. An athletic body is earned, not given.

Sure, some women are blessed with a nice backside, but a muscular physique with hamstrings, quads and shoulders are earned in the gym over a very long period of time.

An athletic body with power and endurance isn't something you can order online or buy in a store. It's something that must be earned with hard work, serious dedication and a little sacrifice.

Now that's something to be proud of.

2. Eating seconds and not gaining a pound.

Lifting weights doesn't only lift your ass cheeks and self-esteem, it actually boosts your metabolism, allowing you to eat more and weigh less.

The more lean muscle mass you have, the more calories you burn on a daily basis, even when you're sleeping.

Has it been scientifically proven that people who lift weights are happier because they can eat steak and bacon guilt-free? #SoPaleo.

Pass the barbell and ribeye, please.

Feeling alive for me used to be the drunk pedicab ride home from the bars, aka a serious sh*t show.

I realize now there are better things in life than waking up from a blackout with wind blown hair and numerous random phone numbers.

The ability to run a 5k just because you feel like it, and squat the weight of your lame ex-boyfriend plus his dog, is really f*cking awesome.

4. An awesome body is the best revenge.

Whether it's your long-time ex or your high school image you're trying to make a comeback from, putting your mind to a goal and achieving it is something no one can take away from you.

The jerk who broke your heart a few years back can't compete with your new ass to waist ratio.

5. You are confident in your own skin.

When you can accomplish seriously awesome things with your body, you become more content with what you look like. You can't hate yourself when you workout and eat well every day.

It is called self-acceptance, and yes, it is an art form.

I have accepted that I will never look a model in a fashion magazine because I am 5'2" and live a different lifestyle. It's one that involves squat racks and callused hands instead of catwalks and sexy beach photo shoots.

And that doesn’t mean I shame them; their bodies are absolutely beautiful. There’s no denying that Candice Swanepoel's legs are damn majestic.

I just know I am different, and I am perfectly okay with that because I like myself, hand rips and all.

Pushing your body is so more mental than physical.

Learning to store away negative thoughts about yourself and push through a workout makes it easier to do in everyday life.

Become more confident, love yourself and go lift some weights.