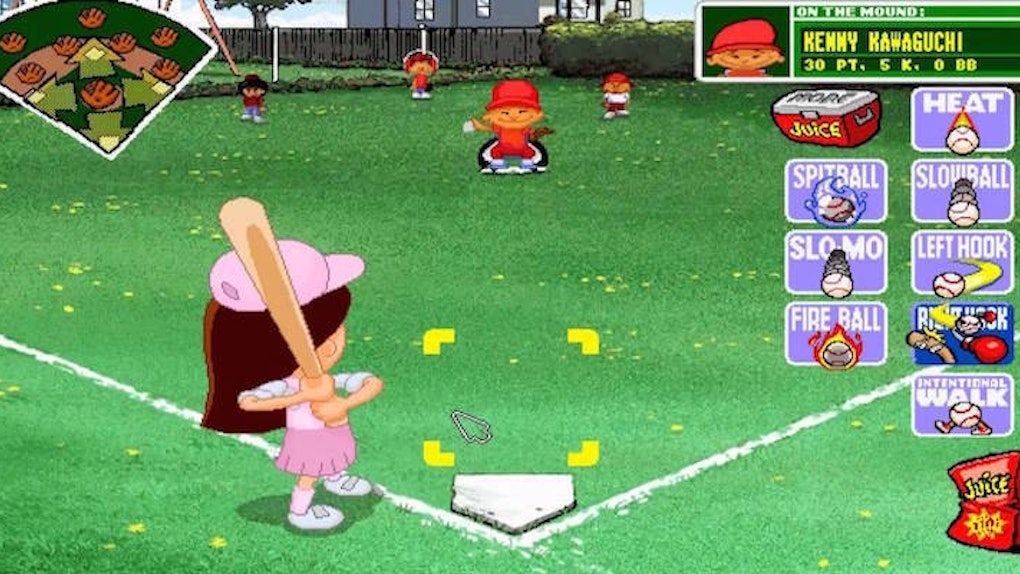 Long before the days of PlayStation 4s and Xbox Ones, computer games were king. And the king of kings was "Backyard Baseball." The game was simple: a bunch of good friends hitting the diamond to play the game they loved.

As the years went by, the game got more fancy as MLB stars were added to the mix, but true fans of the game remember the OBBGs (Original Backyard Baseball Gangsters). Here is a definitive list of the top 10 Backyard Baseball players:

Angela often gets lost in the mix. That's mainly because players don't utilize her strong suits. Everyone's looking for the guy or girl who can park the ball 500 feet or fly around the bases. Delvecchio won't give you that, but she sure as hell can give you a dominating performance on the mound.

If you never sent Angela to the hill, you were missing out. The right-hander sits down batters left and right. Don't overlook AD because of her small frame; she can hurl with the best of them.

It was always hard to figure out Dmitri. We know he's one of the smartest kids of the bunch, always carrying a couple pens within his pocket protector. He's a baseball brainiac, who sometimes shows some upside. He certainly has home run power, and can play a little first base and catcher, but his poor stamina often comes back to bite him. Regardless, Dmitri was always a good player for the team.

You know those players who don't make consistent contact, but send the ball to the moon when they do? The Adam Dunn's and Wily Mo Pena's, if you will. That is Sally Dobbs.

Sally won't provide you many base knocks, but when she connects, she puts it over the fence. She's kind of a high risk, high reward player to have in your lineup. Not to mention, she plays a pretty solid third base and it's always nice to have a sure-handed stud at the hot corner.

Mikey is your classic men's softball league catcher. He's the short, pudgy guy who you can't really stick anywhere else. Mikey is not very versatile and is painfully slow, but the kid can swing the stick.

Sporting a rarely seen closed batting stance, Mikey can spray the ball to all fields. You better hope he hits it out of the park, though, because his cement feet won't let him get anywhere past first.

Amir Khan is your stereotypical utility player, an unsung hero, if you will. He's not going to wow you with any particular skill, but he is consistent in all facets of the game. He's best used in the middle infield positions, or corner outfield spots and isn't a bad choice for a leadoff or second man in the order.

Fundamentally sound players are hard to come by, but Amir is one of them. He just could never escape his brother's shadow.

Jocinda may very well lead your team in batting average. She's not going to hit the long ball, but her high contact rate made her a top of the batting order fixture. Jocinda is more than capable of setting the tone and even swiping a bag or two.

Not to mention, she's a sure-handed fielder who can play any of the outfield positions. Jocinda is what they like to call in the baseball world a “five-tool player.”

Keisha Phillips changed the game. Anyone who thinks baseball is strictly for men has obviously never watched Keisha play. The girl can absolutely rake, a perfect fit for either the third or cleanup spot in the batting order.

Not only that, but she also has great speed. We hadn't seen this power, size and speed combo since the Barry Bonds days (Pittsburgh Pirates Barry Bonds, that is).

They don't call this guy “The Axeman” for nothing. Achmed certainly hacks the axe up at the plate. One of the more natural hitters in the game, he has the ability to send the ball into orbit on a consistent basis.

His raw power makes him a natural middle of the order guy, and is more than able to rack up the RBIs. Not to mention, he was one of the first athletes in history to rock large headphones on game days. I think Dr. Dre and his Beats need to show some respect to one of the founding fathers.

Pete is arguably the most well-liked player in the game. His youthful aura and childlike approach to the game makes it hard for you not to root for him.

The first thing you think of when you hear "Pete Wheeler?" Speed. The dude can jet around the bases like no one we've seen before. He has the ability to stretch singles into triples in the blink of the eye. Also, his fleetness of foot makes him an absolute vacuum in the outfield, a perfect fit for center field.

Once in a while, athletes come around that transcend the game; Willie Mays, Michael Jordan, Wayne Gretzky, Tom Brady and Pablo Sanchez. Nicknamed “The Secret Weapon,” he was simply an hombre amongst chicos.

No one holds a candle to Pablo's skill set; he can do everything. He can hit for contact and power, play any position, has exceptional speed and can even pitch. When you were fielding a team, he was your first pick 10 times out of 10. A sure first ballot hall of famer, "MVPablo," indeed.

He didn't make the list, and didn't even come close in fact, but kudos to Kenny Kawaguchi. The kid was wheelchair-bound for Pete's sake, and still took the field day in and day out. He is a true warrior who displayed endless passion for the game.

Backyard Baseball was a staple of many kid's childhoods, and these 10 players sure made the game fun to play.