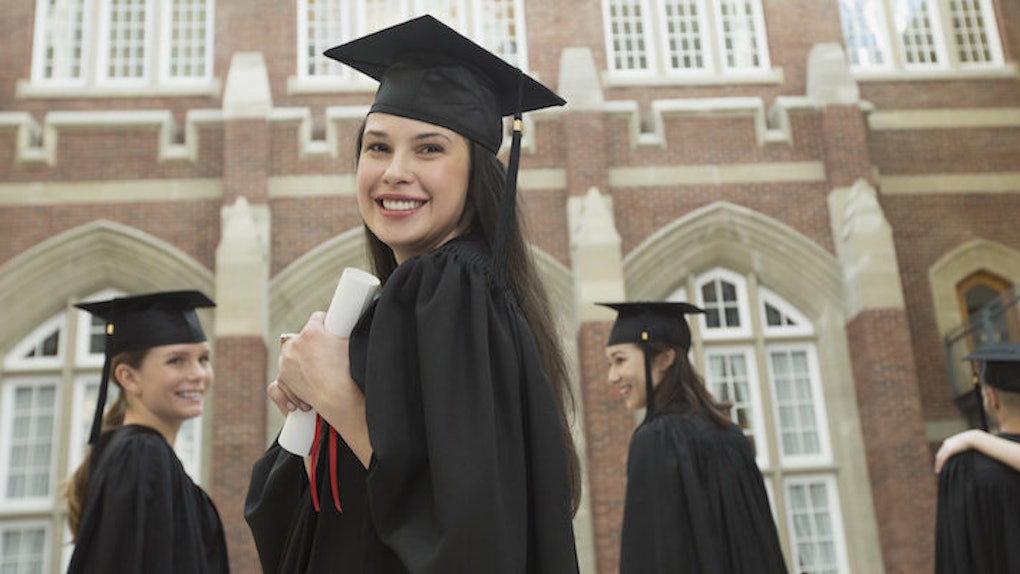 This Time Last Year: A Reflection One Year After College Graduation

This summer marks one year since I graduated from NYU.

In the past few months, I added a BFA to my wall, changed zip codes and got a new job as a video producer at Elite Daily.

I’m a commuter, which means each day, I take the DeCamp bus back to my street and walk past all the neighbors I’ve known my whole life.

There’s something that catches my eye on this walk, no matter how good or terrible my day is: It’s a little black “T,” a car magnet just a few inches tall. It used to belong to Greg*, a boy I grew up with.

This time last year, I wasn't having the greatest time.

I was trying to accept the fact I would be back home, without my friends and without a job. I was also attempting to process a very dark, confusing breakup. In the same week my boyfriend and I broke up, my roommate moved out, and suddenly, I found myself completely alone in a dusty studio apartment.

I couldn’t process the thoughts that came with the loss, and I was lost without the person I loved.  No one called, and the doorbell never rang.

In fact, the only sound in my room was the sound of books hitting my brick wall so hard that the spines would break.

Piece by piece, I was packing up my old life: taking down photos of my boyfriend, tucking away his letters and wrapping up the pristine baseball — a pearl, he told me — he signed for me when I came to watch him coach his high school team. The night before my college graduation, I cried in my room and called my parents, begging them to pick me up.

At times, I would think about the fact I was only 22, and life felt too long. I even wondered if there was a way I could never come home.

Then, I moved back, and we got the news that Greg, the boy next door, had passed away.

I yelled at my sister when she told me because I was sure it could only be seriously false, small-town gossip.

Though I felt like I had just waved to Greg on my walk home, I realized I hadn’t seen him for months. I didn’t know what he had been up to for the past year; all I knew was he had been going to school at Towson and would have been on track to graduate. Greg lived in a beautiful house around the corner; he came from a good family.

His parents had always been involved in community events, and our little sisters played together. We lived in an idyllic farming town of 5,000, where everyone looked out for each other.

It was shocking when we learned Greg had died from a heroin overdose.

When Greg passed away, a lot of us didn’t know what to feel.

Many had lost touch with him, but everyone had had their own experiences with Greg at some point in our lives. I remembered his strong, fiery personality (I’ll admit, we butted heads a few times as kids). I remembered the Greg from high school, the one on the lacrosse team who played in the marching band.

His friends were all good guys, a little bit rough around the edges, and I remembered he loved music.

I remembered stopping by his garage many summers in the past to see one of his friends I had a crush on. It must have been right after freshman year because I remember how uncomfortable my thick NYU t-shirt was in the heat. My very last memory of Greg was saying hi to him on one of my walks home.

He greeted me in his playful, singsongy voice. I wish we had exchanged just a few more sentences.

The line was out the door at Greg’s wake. He was clearly loved by so many.

I saw dozens of faces I hadn’t seen for a long time. A lot of them were other people we had both gone to school with. Though it had been about four years, we all stood still in the same profound state of disbelief, embracing silently.

As I approached his mother and father in the receiving line, another memory of Greg surfaced. It was us in the fifth grade: I wanted to learn how to play the drums, and Greg tried to teach me.

When I finally got to the front of the line and saw Greg lying there, I wondered how life would go on for his family.

The way his mother looked at me, defeated and lifeless, still haunts me. I felt ashamed for the moments I had thought about finding a permanent way out of it all, when Greg’s family would have done anything for just a minute more. Life was bigger than a breakup, and it was going to be long. It was supposed to be longer for Greg.

Suddenly, I felt so lucky to be facing the long road ahead.

I wish Greg could see his parents now. I saw his mom outside their home one autumn afternoon. It was still warm. Nothing had begun to fall from the trees, yet his mother stood at the base of their driveway, diligently sweeping invisible debris from the sidewalk.

Last night, I saw his dad for the first time in about a year.

He was standing in their garage, staring at something as the wind blew his hair across his face. I didn’t wave. I didn’t want him to see me walking back from my new job, happy to be heading home to my family.

We would have both known he would never get to see Greg do the same. The little “T” caught my eye again. It was the traditional symbol for Towson, and it was stuck to Greg’s car.  I can only imagine the circumstance in which these decals were bought.

Was he surprising his parents with a college souvenir as a tiny thank you for sending him to his dream school? Or were they special ordered in the mail, right after Greg had been accepted?

The “T” is a symbol of joy and pride, the mark of a family proud of their child’s accomplishments. I know one day I’ll come home, and the “T” will be gone. I cannot imagine the enormous strength it will take to remove this flimsy magnet.

Here and there, a different memory of Greg will emerge.

The most recent one to hit my consciousness was one of us on the night of our high school graduation, this time, five years ago.The PTA always organized an evening called “Project Graduation” where they bussed the graduating class to a massive arcade and kept us all night to keep us safe from drunk drivers.

It was near 3 am. Greg and I were sitting on the floor of the arcade, delirious from lack of sleep and the amazing day we had just experienced. He had a devilish smile on his face, like he often did.

We were probably wondering what to do with the rest of the night. Should we all jump in the foam pit? Play laser tag? Take pictures in the photo booth? Or, should we stuff ourselves with more pizza?

High school was now behind us, and we had our whole lives ahead of us. But, for one last night, we would just be kids.

*Names of individuals have been changed.