Why do we make unhealthy and unproductive choices, even when we know we should do better?

If you ask most people, they will say poor choices are a result of a “lack of willpower.”

But research from Columbia University is beginning to reveal willpower doesn’t quite work that way.

In fact, you may be surprised just how much small, daily decisions impact the willpower you have for important choices.

Most importantly, it turns out there are simple choices you can make that will help you master your willpower and make better decisions on a more consistent basis.

Why Some Criminals Don’t Get A Fair Hearing:

In a research study published by the National Academy of Sciences, psychologists examined the factors that impact whether or not a judge approves a criminal for parole.

The researchers examined 1,112 judicial rulings over a 10-month period.

All the rulings were made by a parole board judge, who was determining whether or not to allow the criminal to be released from prison on parole.

(In some cases, the criminal was asking not for a release, but rather, for a change in parole terms.)

Now, you might assume the judges were influenced by factors like the type of crime committed, or the particular laws that were broken.

But the researchers found exactly the opposite.

The choices made by judges are impacted by all types of things that shouldn’t have an effect in the courtroom. Most notably, the time of day.

What the researchers found was, at the beginning of the day, a judge was likely to give a favorable ruling about 65 percent of the time.

However, as the morning wore on and the judge became drained from making more and more decisions, the likelihood of a criminal getting a favorable ruling steadily dropped to zero.

After taking a lunch break, however, the judge would return to the courtroom refreshed, and the likelihood of a favorable ruling would immediately jump back up to 65 percent.

Then, as the hours moved on, the percentage of favorable rulings would fall back down to zero by the end of the day.

This trend held true for more than 1,100 cases.

It didn’t matter what the crime was -- murder, rape, theft or embezzlement -- a criminal was much more likely to get a favorable response if his or her parole hearing was scheduled in the morning (or immediately after a food break) than if it was scheduled near the end of a long session.

The figure below depicts the odds a judge will make a favorable ruling based on the time of day.

The dotted lines signify food breaks taken throughout the day. 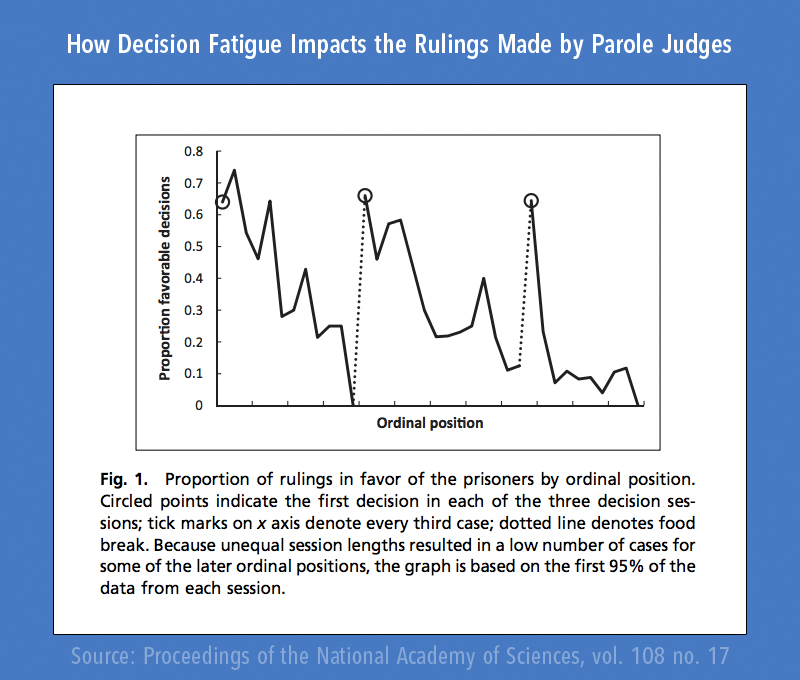 As it turns out, your willpower is like a muscle. Similar to the muscles in your body, willpower can get fatigued when you use it over and over again.

Every time you make a decision, it’s like doing another rep at the gym. Similar to how your muscles get tired at the end of a workout, the strength of your willpower fades as you make more decisions.

Researchers often refer to this phenomenon as "decision fatigue."

When the judge on a parole board experiences decision fatigue, he or she denies more parole requests.

When your willpower is fading and your brain is tired of making decisions, it’s easier just to say no and keep everyone locked up than it is to debate whether or not someone is trustworthy enough to leave prison.

At the beginning of the day, a judge will give each case a fair shot.

But as his or her energy starts to fade? Deny, deny, deny.

Do You Suffer From Decision Fatigue?

Decision fatigue happens every day in your life as well. If you have a particularly decision-heavy day at work, you come home feeling drained.

You might want to go to the gym and work out, but your brain would rather default to the easy decision: sit on the couch. That’s decision fatigue.

The same thing is true if you find it hard to muster up the willpower to work on your side business at night, or to cook a healthy meal for dinner.

While decision fatigue is something we all deal with, there are a few ways you can organize your life and design your day to master your willpower:

1. Plan daily decisions the night before.

There will always be decisions that pop up each day that you can’t plan for. That’s fine. It’s just part of life.

But for most of us, the decisions that drain us are the ones we make over and over again. This is one reason many people feel so drained at the end of the day.

Some of these kinds of decisions are the following: What am I going to wear to work? What should I eat for breakfast? Should I go to the dry cleaner before or after work?

All these can be decided in three minutes or less the night before, which means you won’t be wasting your willpower on these choices the next day.

Taking time to plan out, simplify and design the repeated daily decisions will give you more mental space to make the important choices each day.

2. Do the most important thing first.

If there was the most important court case in the world, when would you want the judge to hear it?

Based on the research above, first thing in the morning. You’d want their best attention, energy and focus to go toward the decisions that were most important.

The same thing goes for your work and life. What’s the most important thing for you right now?

Is it getting in shape? Is it building your business? Is it writing that book you have inside you? Is it learning to eliminate stress and relax?

Whatever it is for you, put your best energy toward it. If you have to wake up 30 minutes earlier, do that. Start your day by working on the most important thing in your life.

I’ve written previously about the importance of morning routines and time management. This research on willpower is just another reason to work on the most important things first.

I think advice like “You just need to decide to do it” gets dished around too much.

Yes, of course you need to decide to do the things that are important to you. But more than that, you need to schedule them into your life.

We all have things we say are important to us.

“I really want to scale my business.”

“I really want to get started on XYZ.”

Unfortunately, most of us simply hope we’ll have the willpower and motivation to make the right decisions each day.

Rather than hoping I’ll make the right choice each day, I’ve found much more success by scheduling the things that are important to me.

On any given Monday, I don’t have to decide whether I’m going to write. It’s already on the schedule.

I’m not hoping I’ll have enough willpower to make it to the gym. It’s just where I go on Mondays at 6 pm.

If you sit back and hope you’ll be able to make the right decisions each day, you'll certainly fall victim to decision fatigue and a lack of willpower.

4. If you have to make good decisions later in the day, eat something first.

It’s no coincidence the judges became better decision-makers after eating. Now, if you cram french fries into your veins every day, I doubt you’ll enjoy the same results. But taking a break to feed your brain is a wonderful way to boost willpower.

This is especially important, because although it’s great to do the most important thing first, it’s not always possible to organize your day like that.

When you want to get better decisions from your mind, put better food into your body.

Whether you're trying to reach the highest level of performance or just want to start eating a healthy diet, the biggest frustration for most people is feeling you need to use willpower on an hourly basis.

Find ways to simplify your life. If something isn’t important to you, eliminate it.

Making decisions about unimportant things, even if you have the time to do so, isn’t a benign task. It’s pulling precious energy and willpower away from the things that matter.

Willpower is one area of life where you can most certainly improve your output by reducing the number of inputs.

While it’s impossible to maximize your willpower every moment of every day, it's possible to make a few changes to your day and your routine, so you can get the most out of your decisions. This way, you can make consistent progress on the things that are important to you.