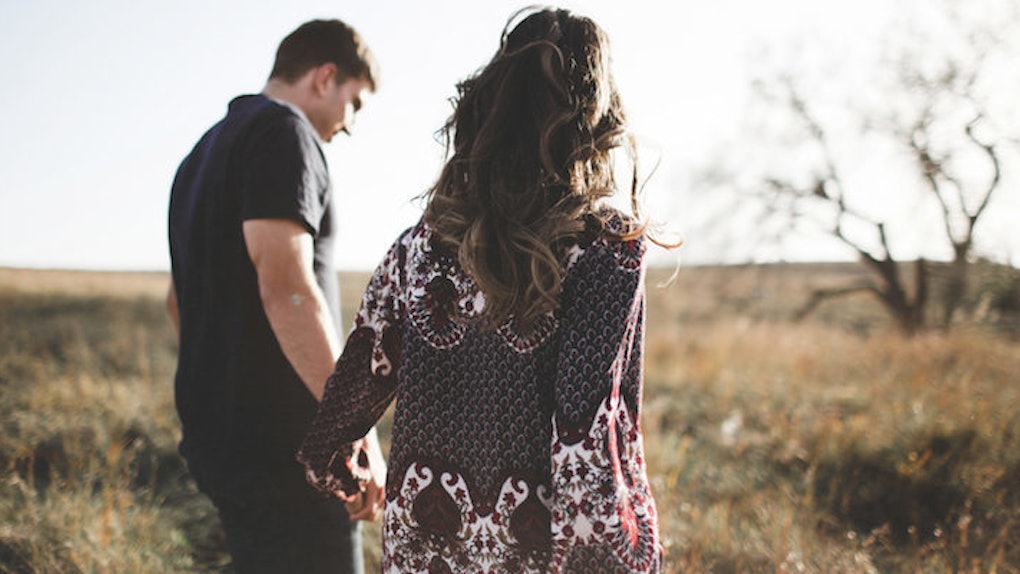 It happened a little later than I had hoped, but it was worth the wait.

He was the guy who sang showtunes with me in the car, the guy who was more romantic than I could possibly hope for and the guy who brought out my goofy side.

The best part was he pursued me.

I never had to wonder if he was going to call. He always called.

I never had to wonder if he wanted a relationship. He asked me what we were within a few weeks of hanging out.

Even through my uncertainty, he held strong. He patiently dealt with my baggage and offered his support.

When he finally won the battle of capturing my heart, I knew there was no question it would be forever.

Everything had finally fallen into place.

At the age of 31, I am still putting myself back together from the three years of hell I experienced with him.

I fell in love with a man who emotionally and physically abused me, and I didn’t believe it until it was over.

It was a slow process.

Our first fight was silly, but it escalated too quickly for comfort.

Our second fight was more emotional than it needed to be.

But he was a passionate person, and so was I.

The times he would tell me people disliked me were just moments of him trying to look out for me.

The first time he called me the C-word, he looked so devastated: How could I stay mad?

It continued. Fight after fight, I convinced myself it was my fault.

Day after day, I held on to the belief that it was worth it.

We were worth it.

Then, I wasn’t worth it anymore. A huge blowout happened, and it was worse than all the others.

Then, he was done.

He couldn’t handle me anymore.

I searched for an answer.

If I just apologized one more time or sent him one more article about relationships, he would see that we could be OK.

After all, I had been to blame many times.

Couldn’t he be wrong sometimes too? Couldn’t he see it was both of us?

My moment of clarity came when he screamed at me on the phone and told me it was all my fault.

Then, I started talking.

I started telling people my story. I told more people than I ever had before.

I'd been scared that people would tell me the truth: I had been in an abusive relationship.

For three years, I had Googled the things he had done to get the validation that they weren’t that bad.

For three years, I cried myself to sleep.

For the first time in three years, I don’t care who hears my story.

I never had scars from the physical abuse. They were fleeting moments that caused little to no pain.

I was lucky. So many women are not so lucky.

But, I do have real scars from the emotional abuse, and I worry daily that people don’t take that pain seriously enough.

I still have days where I make decisions and hear his voice telling me how they are wrong.

I still have days when I miss the good times and laughter.

Then, I fall apart because I know they came at a very high price.

Good moments came when I didn’t tell him he had upset me.

Good moments came when I promised, like a dutiful child, that I wouldn’t be in a bad mood for the rest of the day.

Good moments came when I didn’t tease him too much in front of our friends.

Good moments came when he wanted to look perfect in front of his family, my family or other important people.

Good moments came when I agreed to let him chip away at my self-confidence and emotional well-being without complaint.

That was the price I paid for his smile, his laughter and the sound of his voice when he would sing just for me.

That was the price I paid for his apology present, his parents liking me and moments of peace and quiet in his arms.

The good was so good, but the price was too great.

I spent three years being blamed by the outside world for the problems in my relationship.

It was a punch in the gut every time someone raved about his thoughtfulness and joked about how he put up with me.

They didn't know I was protecting us.

They didn’t know that later that night, I would say something dumb about my feelings.

My belongings would end up in the hall of his apartment, I’d be late to work in the morning because I couldn’t get myself to function and I’d spend my day glued to my phone, praying he would apologize this time so that everything could be OK.

They didn’t know I would have given anything for him to tell me he didn’t really think I was a horrible person.

I wanted him to say he thought of me as more than just a pretty face.

I wanted him to say he loved me, even when I cried.

Emotional abuse convinces you that you can’t survive without the person.

You become trapped in an endless circle of needing approval, but wanting to just get away from the venom.

But no one should have to live this way.

It hides itself behind fake smiles and closed doors.

It lives inside your head and heart, never showing up as a bruise or in a medical report.

Broken doors, trash cans and prized possessions still remind me of the anger, but they’ve been fixed.

They've been patched up.

But the broken dreams and my weakened self-confidence? That’s a daily work in progress.

I know my friends and family can’t hear about the physical things without cringing.

But I implore them (and you) to be aware of the emotional havoc we wreak upon each other and our significant others when we forget about the damage of words.

There is power in the things we say, especially when we say them to someone we claim to love.

I believe my ex loved me. I believe there is a good person inside of him, but I can’t help him with that.

He tried to break me because he was broken, but he was too scared to see it.

I’m still here. So are you.

Don’t be afraid to tell someone his or her words hurt.

Listen to the voice in your head that tells you something isn’t right.

If you can’t find the strength to do that, listen to the people who really do love you.

Find hope in the people who don’t kick you when you’re down.

Get support from the people who can see you crying on the kitchen floor.

Emotional abuse is real, but you don’t have to accept it.