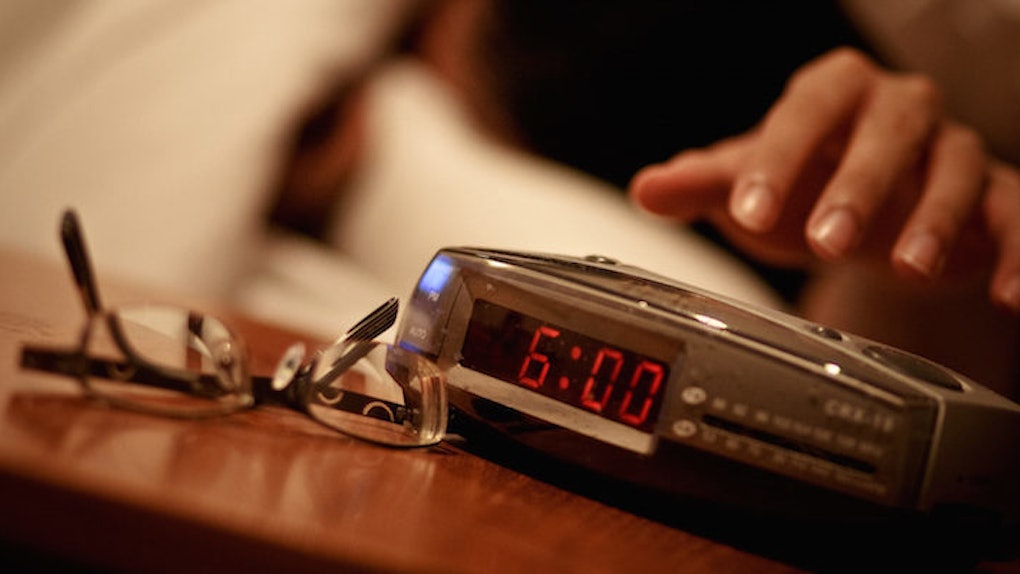 A few days ago, a coworker's iPhone alarm went off in the office and I felt myself cringe. It was the exact same alarm I use every morning -- a sound I've grown to despise.

Next to nails on a chalkboard, my alarm is quite possibly my least favorite noise. It seems to laugh at me as it rips me from the pleasantry of dreamland, while screaming at me it's time to remove my lazy bones from the cozy confines of bed.

Consequently, I've become quite accustomed to hitting the snooze button. Not only does it make the antagonistic noise go away, it gives me a few extra minutes of much-desired slumber.

I've found it increasingly difficult to get enough sleep, which is why I hit "snooze" so often, and apparently I'm not alone.

The world would be a better place if we all went to bed earlier.

An increasing number of adults and children aren't getting a sufficient amount of rest. It's recommended adults get eight hours of sleep, but around 30 percent have reported getting fewer than six hours per day.

Moreover, around 60 percent of adults report having issues with sleep nearly every night.

This is a problem because, as a great deal of evidence shows, sleep deprivation has a detrimental impact on public health and the economy.

Given the body of research, one might feel justified in hitting the snooze button, but doing so is actually pretty awful for you. According to Robert S. Rosenberg, medical director at Sleep Disorders Centers of Prescott Valley and Flagstaff, Arizona:

When you hit the snooze button repeatedly, you're doing two negative things to yourself. First, you're fragmenting what little extra sleep you're getting so it is of poor quality. Second, you're starting to put yourself through a new sleep cycle that you aren't giving yourself enough time to finish. This can result in persistent grogginess throughout the day.

Ultimately, by hitting the snooze button, you're setting yourself up for an unproductive day.

With that said, the reason we're tempted to hit "snooze" in the first place is that we're so sleep deprived. This isn't because we're getting up earlier, but due to the fact we're not going to bed at a reasonable hour, which is a product of various factors and habits.

Our growing affinity for devices like smartphones and computers, for example, is a huge part of why we can't get to sleep.

Research has shown the blue light emanating from these devices disrupts our circadian pacemakers and contributes to insomnia. Clearly we need to make a greater effort to put down our smartphones in the hours before we head to bed.

While literally "hitting the snooze button" is bad for us, let's think of it as a metaphor for making the effort to get the sleep we so desperately need.

The importance of sleep cannot be overstated, but it's often underestimated. If we "hit the snooze button" more often, in the figurative sense, we could save both lives and billions of dollars.

Sleep deprivation is terrible for your overall health and safety.

Getting enough sleep can actually be characterized as a matter of life or death. There's widespread evidence people, particularly men, who don't receive enough sleep on a consistent basis die younger.

Sleep is increasingly recognized as important to public health, with sleep insufficiency linked to motor vehicle crashes, industrial disasters and medical and other occupational errors. Unintentionally falling asleep, nodding off while driving and having difficulty performing daily tasks because of sleepiness all may contribute to these hazardous outcomes.

Research has shown driving tired is just as dangerous as driving drunk. In fact, the CDC estimates drowsy driving leads to around 6,000 traffic fatalities each year.

The good news is, there's a very simple way to work to prevent these issues: Go to bed earlier and get more sleep.

Chronic exhaustion causes huge damage to the economy every year.

The American Psychological Association contends sleeping an extra 60 to 90 minutes a night would make Americans more happy, healthy and safe.

Furthermore, it can significantly increase memory, concentration and, in turn, productivity.

It's estimated around 40.6 million American workers, or 30 percent of the workforce, suffer from insufficient sleep. According to the Wall Street Journal, this has an astronomically negative impact on productivity and leads to an estimated $63.2 billion in losses for US companies annually.

This isn't that surprising given research shows insufficient sleep causes workers to doze off on the job while also significantly increasing the chance they'll waste time on the Internet, or "cyberloaf."

The impact chronic exhaustion has on psychology subsequently affects work output as it diminishes levels of optimism and increases crankiness. Research has shown happy workers exhibit higher levels of productivity, creativity and teamwork.

Therefore, sleep deprivation is not only terrible for health and safety, it's detrimental economically.

We can't continue to ignore how important sleep is; it reinvigorates all aspects of life.

To borrow from John Steinbeck:

It is a common experience that a problem difficult at night is resolved in the morning after the committee of sleep has worked on it.

So, rather than miserably slapping your alarm clock as you struggle to remove yourself from bed in the morning, learn to think of "hitting the snooze button" as going to bed earlier and getting more rest.

The benefits are undeniable, and you will find it significantly easier to welcome the new day.

Citations: Why Cant We Fall Asleep (New Yorker), Insufficient Sleep Is a Public Health Epidemic (CDC), Go Ahead Hit the Snooze Button (WSJ), Get Some Sleep and Wake Up the GDP (NYT), Why Hitting The Snooze Button Will Screw Up Your Entire Day (Huffington Post), Sleep and mental health (HMS), More Sleep Would Make Most Americans Happier Healthier And Safer (APA), Is the snooze button bad for you (CNN), Drowsy Driving Just As Dangerous As Drunk Driving (Huffington Post), Drowsy Driving Asleep at the Wheel (CDC), The Importance of Rest (PT), 8 Scary Side Effects Of Sleep Deprivation (Huffington Post), Insomnia with Short Sleep Duration and Mortality (Sleep)