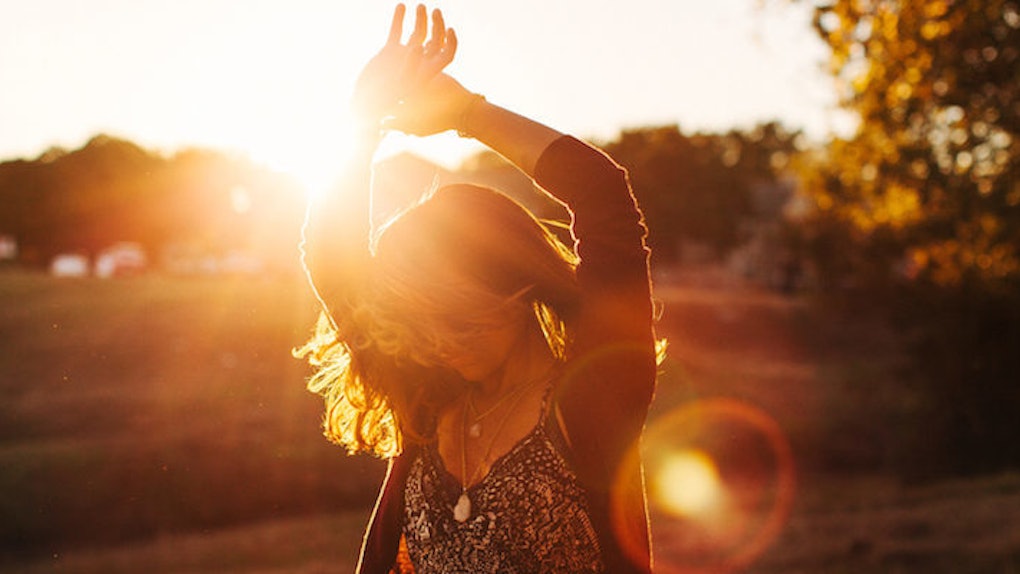 Happiness: You wish for it every year as you blow out the candles of your birthday cake. You swipe right on Tinder hoping to find it, fly halfway across the world to experience it and slave away at your cubicle in the name of it.

You know you deserve to have it and dedicate your entire life to the chase. After all, it's the only thing that makes life worth living, right? Except, there's a problem.

No matter how much you accomplish, laugh, live or love, it never feels like the real deal. Even when you're bursting with excitement, you believe there's something more, something bigger out there waiting for you.

But is there? This question's plagued me for as long as I can remember. Like you, I wanted to believe true happiness existed. But as the years went by and I was still pursuing it as hard as ever, I worried it would always be out of my reach.

Until, one day, something happened. While I shoved a sh*tty, tasteless rice cracker down my throat, I learned a lesson that changed everything. I know this sounds crazy, but I promise I can explain. Before I get to it, though, you need to hear the full story.

How I Ran Out Of Happiness Options

I once promised myself I would never settle for anything less than true happiness. So when I became disillusioned with my life choices and career, I did what any irresponsible 20-something would do.

I quit my job and booked a one-way ticket to the other side of the world. Armed with a backpack stuffed with too many clothes and way too many expectations, I embarked on a six-month backpacking trip across Southeast Asia.

At first, I believed I'd found it. I felt peaceful, blissful and alive. But as the months passed, the novelty wore off. Instead of being excited, I felt tired, grumpy and horribly guilty. It's as if I'd been hooked to a drip of liquid happiness, and doctors decided to cut me off.

So, I had to admit it. My quest had failed, yet again. What now? Had I just run out of happiness options?

Two Inconvenient Truths About The Pursuit Of Happiness

I'll spare you the details of that ridiculous pity party I threw for myself after that epiphany. But, I refused to admit defeat and tried another approach instead.

I turned to people who are way smarter than me in the hope that they could tell me a thing or two about true happiness. So, I maxed out my Kindle with books about neuroscience, psychology and anthropology.

I googled Buddhist teachings and watched YouTube videos about Hindu philosophy. I even spoke to a spiritual guru in Bali. (Yeah, I was kind of desperate at this point.)

Throughout my research, I learned two inconvenient truths. I came across the theory that happiness is genetic. According to research, each and every one of us is born with a different level of happiness that's embedded in our DNA.

In other words, unless you've won the happy gene lottery, you're screwed. I also realized that what I'd been chasing all my life was quite possibly nirvana. It's a perfect place of enlightenment, peace and happiness, aka the ultimate goal of Buddhism.

Now, unless I can somehow become a Buddhist monk, take a vow of celibacy and spend my days meditating in silence, I'll probably never get there. Basically, the situation didn't look so good.

Giving up on finding happiness was a blessing in disguise. Once that huge weight was lifted off my shoulders, I was ready to experience what happened next.

What I Learned About Finding Happiness

A couple weeks later, when I was snacking on a sh*tty, tasteless rice cracker, wishing it was a Kit Kat, everything changed. I took a bite, and I heard a voice in my head.

It was my own voice, and it was angry. It said, “Bitch, this is happiness. Right here, right now. Just f*cking look at it." Yeah, I know, my inner psyche and I are going through a rough patch right now.

But, it taught me an important lesson that day, and I believe the lesson is this: These dull, boring episodes you're wishing away? That's your life. Everything else is just a bonus.

Stop thinking about these moments as lulls in your existence because they're so much more than that. Once you take away pleasure, sorrow, joy and misery, these moments are all you're ever guaranteed to get.

They're like the building blocks of a house, the structures that hold everything together. They're the foundations that will remain when the pretty wallpaper wears off and the expensive furniture disintegrates.

They might be boring and ugly, but you have to get them right. Because there's no point adding stuff on top if everything's crumbling underneath.

For the first time, I understood these seemingly boring events, like eating sh*tty rice crackers, are an integral part of our lives. They're not just fillers or lost time best spent planning the next pleasurable experiences that lie ahead.

Now, I know there's no way we'll find pleasure in these things. That's not what matters, though. What matters is that we can look at these unmemorable moments in the eye and tell ourselves, “This is all there ever really is to life, but you know what? I'm OK with that."

And truly believing these words when you think them, that's happiness. It doesn't mean we have to settle for mediocrity. We can — and should — chase our ambitions and dreams because they matter.

We just have to stop thinking we'll find true happiness along the way. Happiness has been on this journey all along. It's just hard to recognize because it looks different from what we expect.

It doesn't look like that alluring, smiling sexpot who turns heads when he or she enter the room. Instead, it's that sh*tty, boring nobody clinging on to you, waiting for you to give him or her a chance.