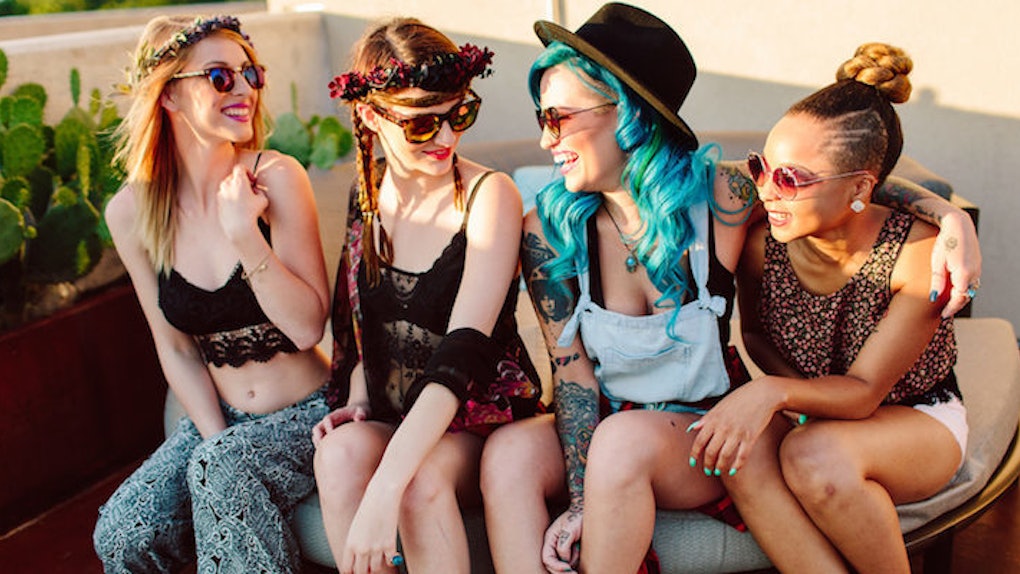 The Squad Life Chose Me: 5 Reasons You Wouldn't Survive Without Your Girl Gang

Squads: Taylor Swift has one, Leonardo DiCaprio has one and even the pope himself showed up with one when he visited the United States last year.

While some people roll their eyes at obsessive hashtagging and captioning of "squad," "squad goals," and "Nobody really likes us except for us," science shows us our squad is actually a beneficial (and even necessary) part of life.

1. It's human nature to want to belong.

Maslow's hierarchy of needs describes the level of human needs in ascending order of importance.

At the bottom are our base physiological needs: food, water and shelter.

Right above that is the need for safety.

During caveman times, this meant being safe from the elements (wind, rain, saber-tooth tigers, woolly mammoths and other humans).

The third level is the need to belong and have human companionship.

During prehistoric times, this is why people gathered together in tribes, which were the earliest (and probably the smelliest) forms of the modern-day squad.

2. Your squad keeps you in check and makes you better.

When one need is fulfilled, a person seeks to fulfill the next one (and so on).

While "motivational" may not be the first term that comes to mind as you picture your crew passed out on the floor on a Sunday morning after one too many Fireball shots, Maslow’s theory also states “one must satisfy lower level basic needs before progressing on to meet higher level growth needs. Once these needs have been reasonably satisfied, one may be able to reach the highest level, which is called self-actualization.”

Your squad is the precursor to achieving self-actualization.

In addition to being your own personal cheerleading squad, your friends are also vital to keeping your egotistical ass in check.

This is especially true when you get out of line and ask your crew to promote your latest selfie, or when you get pissy because they haven’t watched your Snapchat story yet.

3. Your squad is your family away from family.

Close friends support you through thick and thin.

This is a crucial component of belonging, especially as more and more Millennials have chosen to move farther away from their families.

Traditionally, most young adults never moved too far from home, as they went into the family business or learned a trade from an elder family member.

In the last several decades, however, young adults have ventured farther and farther away from their hometowns in the pursuit of higher education, a better career or just because they didn't want to spend the rest of their lives in some crappy Midwestern hell hole.

Your friends help you out when your car blows a tire, they bring you Sprite and crackers when you're sick and they spend the holidays with you when you're too broke to buy a plane ticket home to said crappy Midwestern hell hole.

The Internet can be a cruel and unforgiving place.

Whether someone is criticizing your physical appearance, humblebragging about his or her latest mediocre accomplishment or making poorly worded, grammatically incorrect and logically unsound arguments against your opinions, almost everyone can fall victim to Internet sadness occasionally.

Even worse for introverts, it's hard not to go out in public without at least worrying on some level that everyone you see is prettier, skinner, younger, richer, smarter and funnier than you are.

While that level of anxiety never fully dissipates — especially for those of us who are somewhat self-conscious and naturally socially anxious — our squad mitigates those feelings a little bit.

5. A squad is more valuable than money.

The hard truth is, nobody probably does like you but you.

When other squads watch you loudly yelling, "They hate us cause they ain't us" and waving shots in the air like you're frantically signaling a helicopter to land on your deserted island of douchebaggery, they are less than impressed with your level of self-perceived awesomeness.

However, the memories you create with your squad (and the posts, pictures, updates, hashtags and selfies that accompany them) will probably long outlast your current bank account.

You'll grow old, and maybe 60 years from now, you and your squad will find yourselves asking the staff at the nursing home to put on some Drake for old time's sake.

Either way, nobody will ever be able to rob you of your memories.

It should also be noted that Maslow argued "only one in 100 people become fully self-actualized because our society rewards motivation primarily based on esteem, love and other social needs."

Therefore, most people do not have their lower-level base needs met.

Even if you don't make it into the top 1 percent financially, here's hoping that with the help of your squad, you can be one of the 1 percent who lives his or her life to the fullest.