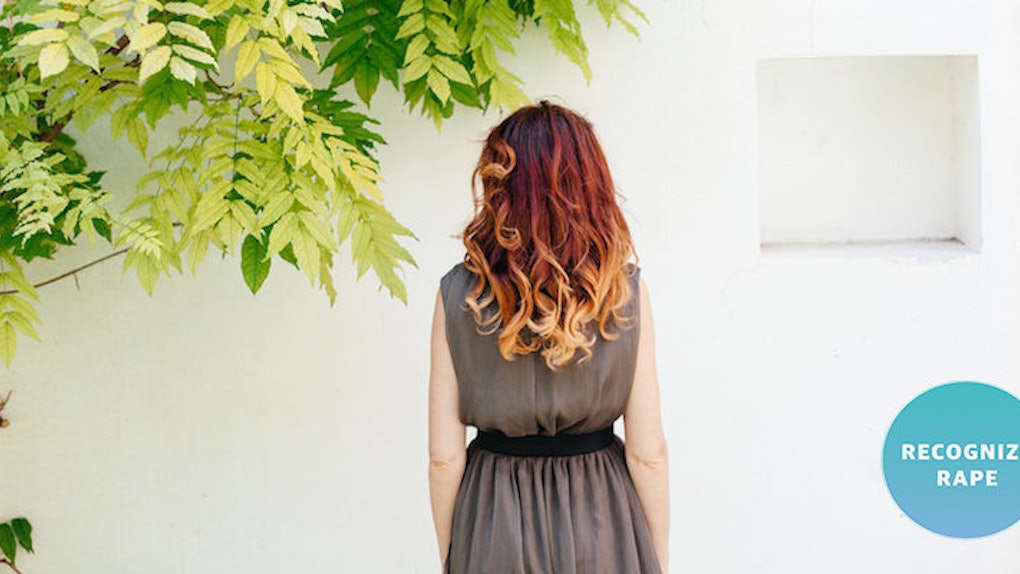 Realizing I Was Raped Took Me A Long Time

I was also 19 the first time I was raped.

What I remember most from that first time was the disbelief.

It filled me through the entire assault and through the night I spent sleeping next to a man who had betrayed me in the worst possible way. It dogged my steps as I tried to go back to class, back to work, back to hanging out with my friends.

Every time I tried to talk about it, the only thing that came out was silence that should have been a scream.

Rape doesn't happen in the same bed you shared a dozen times with a man you care about. Rape does not turn someone you trust into a monster. Rapists don't give you back rubs after. Their eyes don't fill with tears as they tell you they're sorry.

They do not love you.

The betrayals always start small enough that you barely notice them: He's a little rougher with you than you'd like, his words are a little crueler than they used to be, you feel a small amount of relief to be away from him and don't know why.

There is always kindness after every hurt to try to make you forget. He loves you almost all the time, except when he's destroying you. You have to choose: Either the love isn't real, or the hurt isn't.

I chose incorrectly, for a long time.

I wish someone had told me that there is a kind of love that is poison.

I wish someone had told me that there is a kind of love that is poison.

I couldn't see that our relationship was built upon too much unhappiness to hold steady; I thought that when you cared about someone, you were expected to carry a certain amount of pain.

So I cried alone in his bathroom after every single time he would assault me, trying to keep the pain buried deep enough so I could pretend it wasn't breaking me. If I acknowledged how deeply the hurt went, I would have to admit why.

I was too smart to be in a sexually abusive relationship. I was too strong, too independent. It didn't occur to me that just because he wasn't hitting me didn't mean he wasn't hurting me.

Though there were no bruises to cover or broken bones to have reset, eventually, he would have killed everything I was.

We fought occasionally about how destructive our sex life was. We talked in circles around my distress and fear as I tried to gently explain why I didn't want him to hurt me anymore.

Over and over, I laid myself bare, desperate for understanding. I suggested alternatives for the things he insisted he needed to do. I explained the physical damage he was causing.

There was no misunderstanding between us. He was not confused or misinterpreting signals. He knew I was in pain, he just didn't care.

He knew I was in pain, he just didn't care.

No logic or love or downright begging ever kept me safe.

Arguments ended with emotional blackmail or manipulation. If he wasn't denying he was being hurtful, he was telling me he just wouldn't want me if I didn't agree to be violated. I was distraught and exhausted.

Almost all at once, I couldn't carry all of it anymore. And after almost three years of choosing him, I chose me.

I felt such relief the final time I left his house.

Months later, in bed with a new lover, I had a panic attack. I covered it well; I don't think he ever knew. But I felt like I had been hit by a truck. My head was sent spinning for days, and finally I asked someone if what had happened to me was rape.

She said of course it was, and I just cried.

I hadn't been sure it counted. I didn't always tell him “no” out loud, but he never listened when I did.

I didn't leave him, this man who made violence seem to be part of how he loved me. I hid how badly I was hurting — crying behind closed doors and with the shower running, though I always knew he heard me and did nothing.

I had spent years denying it, so what right did I have to claim the word rape now?

I believed what everyone had always seemed to imply: If I stayed with someone who hurt me, it's because there was something wrong with me.

I had to learn how to love myself all over again.

I had to learn how to love myself all over again.

I had to make myself remember every time I'd been hurt, every argument we had where he denied the truth to my face and every manipulation he used against me. I had to forgive myself over and over again for not seeing it for what it was.

I have clawed and fought my way out of pain and anger and that same disbelief I never really left behind.

There are days even now, almost four years later, I wake up knee-deep in grief.

About a year ago, I confronted him about it.

He told me he hoped one day I could move on and I shouldn't dwell on the past.

I almost drove hundreds of miles to the state he had moved to so I could demand he own what he did to me. I wanted to hurt him like he had hurt me.

I had not sat up nights in hysterics or gone to group therapy or distanced myself from my less-than-wholly-supportive friends so he could brush me off.

Then, I realized, it didn't matter.

I know what happened to me: I loved a man who raped me during the course of an almost-three-year relationship. It was never my fault. I survived, and then I rebuilt myself from the ground up.

No matter how much I might like to forget it, this violence will always be part of my story. But I refuse to let it end there.