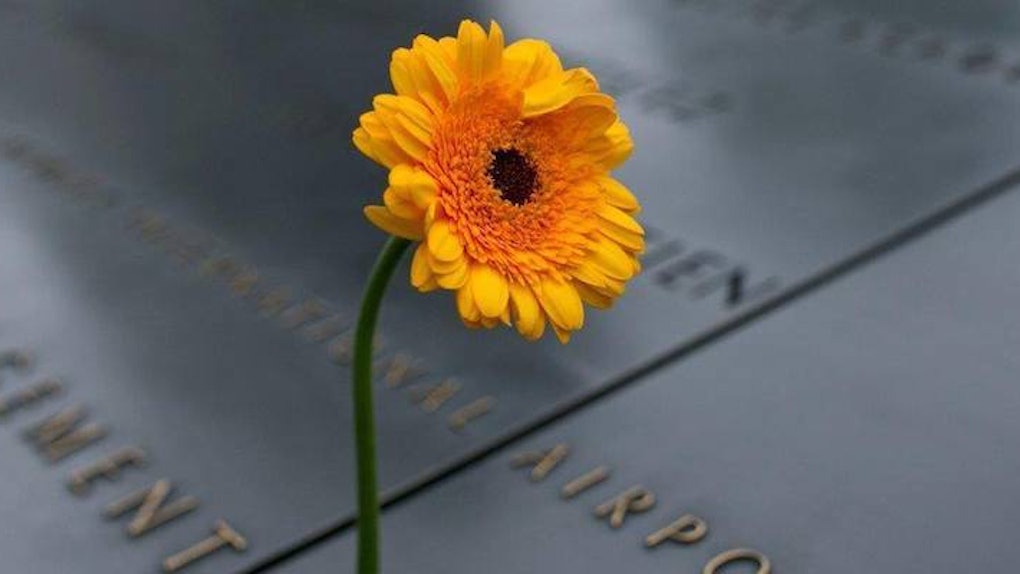 As we experience the 14th anniversary of 9/11, its presence, as always, is strong.

That day, my journey through the World Trade Center to the World Financial Center was swift and purposeful, as are all journeys in New York City. The sky was unusually clear and strikingly blue.

I paused at the bottom of the long escalator into the World Financial Center, wondering why the fruit vendor was not there. He wore, what I now know to be, a Pashtun cap, typical of Afghanistan, and he sold fresh fruit at the bottom of those stairs for years.

He was there every single day except for that Tuesday.

After the first plane hit, and I watched chunks of burning concrete fall to the ground, I ran outside with a small group of my Wall Street colleagues. We heard it may have been a small personal plane, and we talked amongst ourselves as we waited for confirmation.

At 9:03 am, we watched the second plane fly above our heads in what felt like slow motion, with the words "United Airlines" flashing before our eyes.

I could sense the passengers as they looked ahead to their futures, their fateful journeys that would end in the next few seconds.

The collective hearts of those of us on the streets were immediately filled with terror. People ran frantically to the Hudson River, seeking escape.

Others, including me, ran in the opposite direction, not knowing initially whom or what we were running from.

We hoped to beat death while tasting it with every breath.

Later, continuing to run, I saw a man swan dive, with grace and dignity, from one of the towers. That bone-chilling moment lives on in my mind like a strange movie, the lighting perfectly orchestrated for a clear and memorable view.

The jumpers chose their own methods of death to avoid being burned alive. Later, I heard the stories of shoes melting to the soles of their feet, and of bodies splattered at the base of the towers.

I spoke with friends and family when I could get a cell signal, and I had conversations I cannot recall. They remember every word I shared, perhaps because they believed they were my last.

I was physically and mentally consumed with unimaginable sights and sounds, and they sent me into sensory overload. I heard steel crushing and bending, like an amplified garbage truck; it was a sound that would continue to haunt me for years to come.

I feebly attempted to comfort a teenage girl, crying and calling out for her mother, as we watched her office building collapse.

I heard the sound of jets, invisible in the black-tarred sky, and I waited for the impending bullets to shoot us all dead.

The screams of disbelief, anguish and horror can never be erased. The sights and sounds of “normal” life have never been the same.

Every airplane is a potential weapon. Fireworks jar me and hurt my heart.

After taking a Circle Line boat (that was turned into rescue vessel) to New Jersey, I walked across a desolate Holland Tunnel. The silence was eerie. It was an empty space of death, fear, hopelessness and loss.

As a survivor of that day, I hold on to an indescribable sadness. I breathed it in with the whirlwind of office papers and ashes of burning bodies.

I share my personal story as a way to relieve my suffering, hoping to somehow get it out of my system. I share it because everyone must know, remember and never forget.

I was one of the lucky ones that day. Something deep inside me, and in so many others, changed forever.

In the days and weeks that followed, New York City took on a ghost-like persona. We could feel the souls of the dead bringing us together.

In the aftermath, I experienced the purest love I’ve ever known among the survivors. It was palpable, and I am blessed to have known a love so complete.

I hope the lost souls of 9/11 are resting peacefully, and I know they live on in our memories, compassion and love.