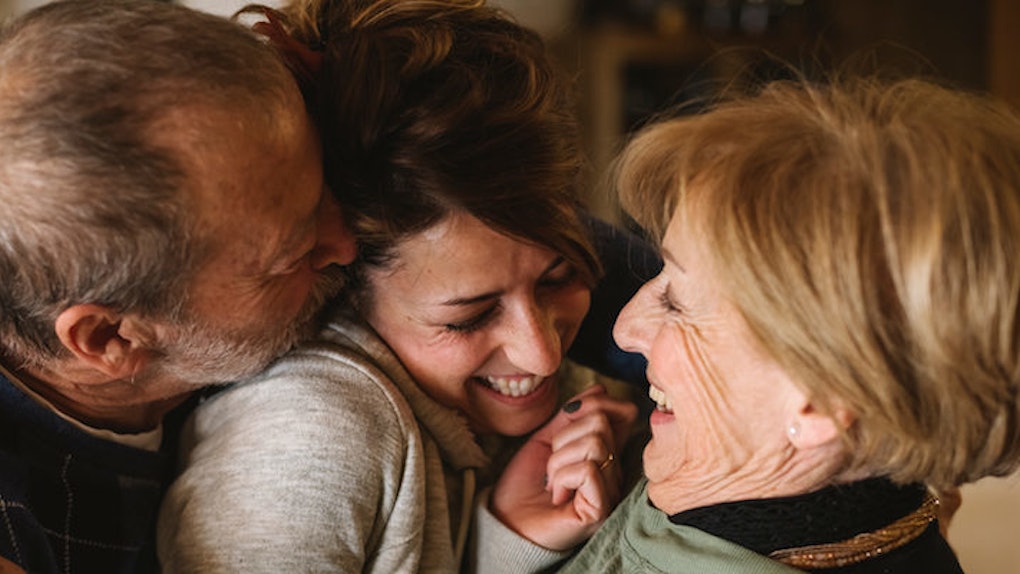 I Am The Product Of A Closed Adoption, And I’d Have It No Other Way

I know their first names: Peggy and Don. That made watching "Mad Men" a little weird at times.

I know how they met: work.

I know Peggy’s circumstances: early 20s, working as a secretary, unable to care for a child by herself.

My adoption was a closed adoption. I have information on my birth parents, but I’ve never met them. There’s no open line of communication. My adoptive parents didn’t meet them when I was born.

Instead, I was born in a hospital in South Jersey and then handed over to an organization called Catholic Charities. The first two months of my life were spent under the care of German nuns. I know, how very "Sound of Music" of me.

I suppose I could try to track down my birth parents -- get to know them, gather more info on my background. But I’ve never felt an overwhelming desire to sleuth for more. I’ve never felt that gaping hole that adopted children on television and in movies are always talking about.

I don’t know my birth parents at all, but I’m okay with that. And, at 28 years old, I don’t see that changing. Ever.

I’ve always known I was adopted.

It’s hard for me to believe the fictional adoptions on TV -- you know, the ones where kids find out that they’re adopted on their eighteenth birthday. To me, that automatically shrouds the act of adoption in a cloud of negativity, treating it as something shameful enough to be kept secret.

That’s not how I was raised.

My parents have always treated my adoption as something supremely special -- cool, even. Something that set me apart from the rest in a GOOD way.

We celebrate the day I was adopted as a second birthday -- my “A-Day.” My parents even make it into a Hallmark occasion, whiting out the “birth” part of “birthday” cards and substituting it for an A.

We go out to dinner at the same place every year on my A-Day. I get presents. They recount the story of getting the call that a baby was finally ready for our family. It’s one of my favorite family traditions. And not just because it involves presents, but because it celebrates our family’s formation.

I’ve never been confused about where I came from.

Maybe it’s because I’ve always known that I am adopted. I’ve never had to deal with that moment of being shaken to my core -- that moment of my reality totally flipping after finally feeling like I understood myself.

I’ve never questioned my identity in the way adopted children are typically portrayed, feeling like there’s a giant hole in the middle of their being. I’ve always felt that the situation is cut-and-dried: I was born to one set parents, but I was meant to be raised by another.

My birth parents might have contributed the genes that make me a person in science’s eyes. But the person I am -- my personality, my choices -- those are all because of my real parents. The ones that raised me.

I’ve learned to deal with the questions.

When I was a kid, I was proud of being adopted because of how my parents treated it. I told anyone and everyone about my adoption.

But as I grew older, I found that people got more and more comfortable asking me uncomfortable questions. They would ask why I was given up for adoption. Why my parents needed to adopt. Why they “chose” me out of all the babies.

And, at the end, I’d always get the same question: Why don’t you want to get to know your birth parents?

It started to feel like my mission to educate people on adoption -- that it isn’t like what you see in the media. The questions have also been vital for me. They’ve caused me to evaluate how I truly feel about my adoption. My answers have become second-nature as the years wear on.

I already know everything I need to know about my birth parents.

My birth mother made a choice when she was pregnant. She knew she couldn’t take care of a baby, so she did something better than suck it up and deal: She gave me to a family that COULD take care of me.

She gave me to a family that was ready to love me. And if my birth father never knew about my existence, I think that’s a sign he wasn’t ready to have a child either.

I respect my birth mother’s decision to put me up for adoption and her strength in making the tough choice. That respect is all I really need to know about her.

I’m happy she made that decision. I’m happy I don’t have any confusion about who my real parents are. I’m happy I landed where I did, because it’s shaped everything about my life.

I’m happy my adoption was closed.