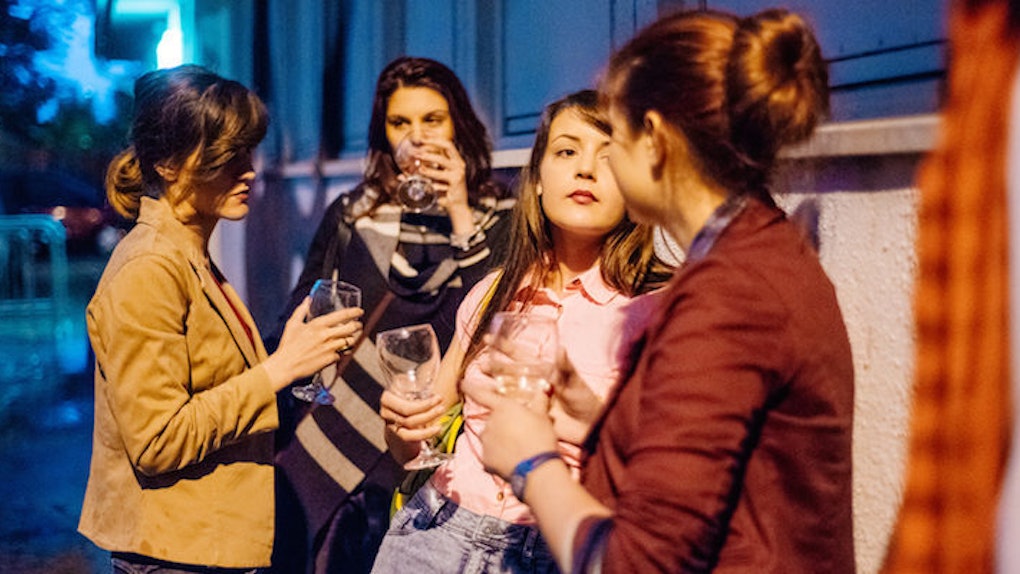 Why Post-Grad Life Is The No Man's Land Of Adulthood

A couple months ago, I was having dinner with a friend in a bougie restaurant in NYC.

I had just graduated from college and began a job in the city, and, in an attempt to establish myself as a real grownup, I was working my way through a list of uppity, slightly expensive restaurants my coworkers had recommended to me.

First up was this one on Park Avenue, called Barbounia. The walls were a soft peach, and on top of each table sat a candle that gently flickered to illuminate the lacy, creamed-colored tablecloth underneath it.

It was one of those fancy-but-not-too-fancy restaurants you might see in the beginning of a romantic comedy, in which the female protagonist gets dumped, proposed to or something else that sets the tone for the entire movie.

As I was perusing the expansive drinks menu, a list of rosés caught my eye. In college, my alcoholic beverages of choice were mostly watered-down beer, boxed wine and gross vodka that came in a plastic handle, so I'd never had rosé. But I knew I'd always wanted to try it.

So, in a jumble of awkward mispronunciations of the name, I picked the brand that sounded the French-est and the fanciest.

Not surprisingly, I pronounced it wrong, and the waiter suggested something completely different, since the brand I'd selected was not that good, he said.

I waved my hand in defeat. "Sure, that's fine. Or whatever's the cheapest works too."

The waiter nodded and walked away, his eyes rolling so far back into his head that I was surprised he didn't go blind.

On the outside, I chuckled at my stupidity. But inside, I sighed, feeling embarrassed and dumb, like I'd just tried and failed to use a fake ID on a bouncer at a club.

In an attempt to pretend to be the grownup I think I am, I failed. I knew deep down I didn't feel mature enough to confidently order a foreign bubbly wine from a waiter with an accent at an upscale Mediterranean restaurant.

At the same time, though, I also knew I felt way too old to ask him for something more familiar, like a Bud Light or another drink from my college days. I didn't want to force myself to pretend to be the kid I no longer think I am.

This wasn't the first time I felt the push-and-pull of post-grad, the no man's land of adulthood in which every time I wear a blazer and heels, I feel like a kid playing dress-up in her mother's closet.

Since I graduated college this past May, I've felt too young and too old for absolutely everything.

Last weekend, I decided I was feeling too young for my big-girl job, so I took off from work and visited my alma mater, Boston College.

On Saturday night, I hung out in my junior friend's off-campus apartment, and I watched underclassmen boys with less hair on their faces than I have on my legs push four tables together to create a massive table to play Slap Cup.

I willfully participated in several rounds, got drunker than I'd been in months and danced like I was a baby Eagle again.

It amazed me that even after months away from campus, playing drinking games with teenagers who identify themselves by what they're studying in school made me feel right at home.

Then, around 2 AM, just as I was finally completely forgetting how old I was, Taylor Swift's "22" blared on the speakers, and I had the terrible, terrible realization that the only person in the room who came anywhere close to relating to this song was me.

Looks like I was too old to be in college, too.

Now, I'm not saying I think 22 is old. But when you're at a party with underage kids in a sticky apartment that's littered with beer bottle caps and pong balls and located a half a mile from a college you no longer attend, you sure as hell don't feel young. At all.

In fact, you actually feel pretty ancient and irrelevant, like one of those fossilized animal intestine condoms from the early 1900s that people "ooh" and "aah" at in history museums.

My weekend away from work and back to BC confirmed my fears: I really don't belong anywhere, do I?

I don't know if there will be a single moment when I'll finally feel like the shift in my identity between young recent grad to mature adult is complete. Maybe it'll never actually come, and maybe this no man's land, in all of its instability and uncertainty and weirdness, is my identity, and I should embrace it.

Maybe, just maybe, I can wear my pencil skirt and have my crewneck sweatshirt, too, and I can belong everywhere and nowhere at the same time. And, you know, I think I'm okay with that.