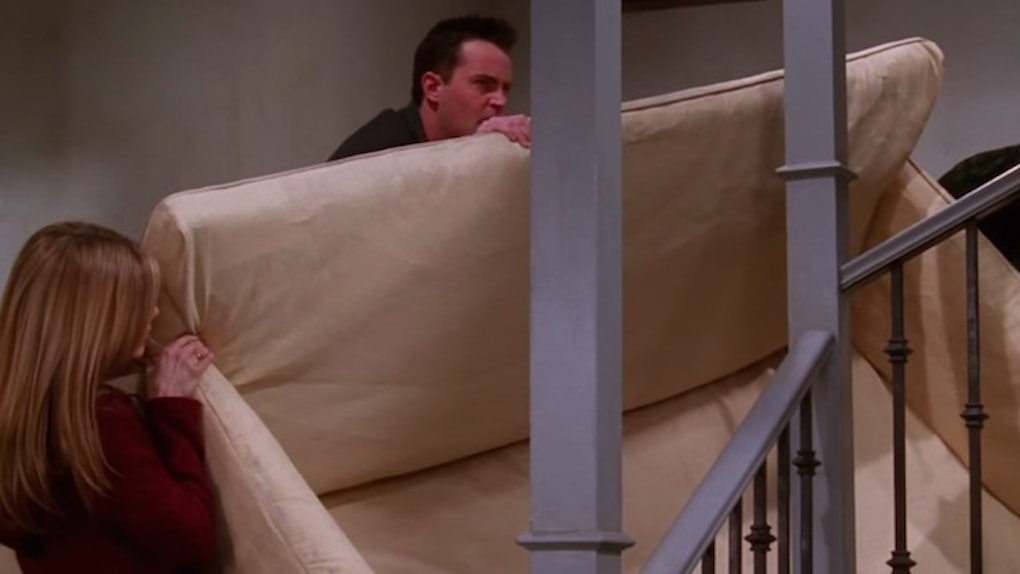 6 Important Tips For Your First Solo Move Away From Home

I've moved my entire life. So the concept of packing up my goods and schlepping somewhere else isn't a foreign one.

But luckily, during those moves, I had my parents. I can't recall actually ever stressing about moves because everything seemed to be taken care of.

That was so not the case this time around.

I'm a recent grad and decided to move out of my place and in with my best friend. I was -- and still definitely am -- super pumped about this move, but as someone who stresses about every little thing, I thought I'd share some pretty important tips for your first big move away from home.

I'm being serious: Hoard your closest friends and make them help you. I'm not one to ask for help, but this time, I'm so glad I did. You'll need someone watching the truck and someone to help you figure out where everything should go. If you can't multiply yourself and work wonders, I'd suggest getting two or three friends.

Donate at least a quarter of your stuff.

I've always known I had a lot of stuff (mainly because I live next door to a Target and Marshalls), but I never REALLY knew until I had to pack it all up. You can do this after or before (probably better before so you're not paying additional moving fees), but donate. There's definitely a Goodwill or some place near you that'll be glad to take your gently worn sweaters and Halloween costumes you can't even look at anymore.

Don't expect to have everything settled for at least a week.

Before I moved into my place, I had an exact idea of what I wanted my room to look like. But with all my stuff, I didn't actually get to go through with that idea until weeks later. You can do a lot of unpacking in a day, but getting everything to meet your Insta-worthy style, isn't that easy. Um, hello, Rome wasn't built in a day, and your townhouse palace won't be either.

You're probably so confused right now, but let me explain myself before you say, “Ew I hate tuna.” Well first of all, you don't have to eat tuna so pipe down. It's an old Brazilian wives' tale if you eat fish as your first meal in a new home, it'll bring you good luck.

So no, you don't have to eat canned tuna or a sad fish stick sandwich, you can order sushi. Now you actually have a reason to scarf down a boat filled with salmon sashimi and California rolls.

There's nothing worse than being somewhat settled, turning to your roommate and saying, “Now what?” In my humble abode, we live and die for "Law & Order SVU," so cable was a must. The Comcast guy was in and out within the hour, and as I unpacked, the roomie and I discussed how we felt about Liv Benson's new 'do.

I had to fork over a hefty bill after my move and that's because I hadn't truly calculated how long the move could possibly take. Also, who knew in Boston you need parking permits to move? No one told me, and that definitely made things worse (but also, thank God there was a spot on my street).

My movers were great, but definitely pricey. So do your research and decide for yourself whether you want someone cheap and maybe a little slow, or vice versa.

I hate to say it, but no matter how well you prep for your move, it will stress you out, at least a little. My advice is do your chakra breathing and test out how patient you can really be. Moving isn't super fun, but a new home always is. Look at the bright side, you now have a reason to go ham on Amazon and Etsy.