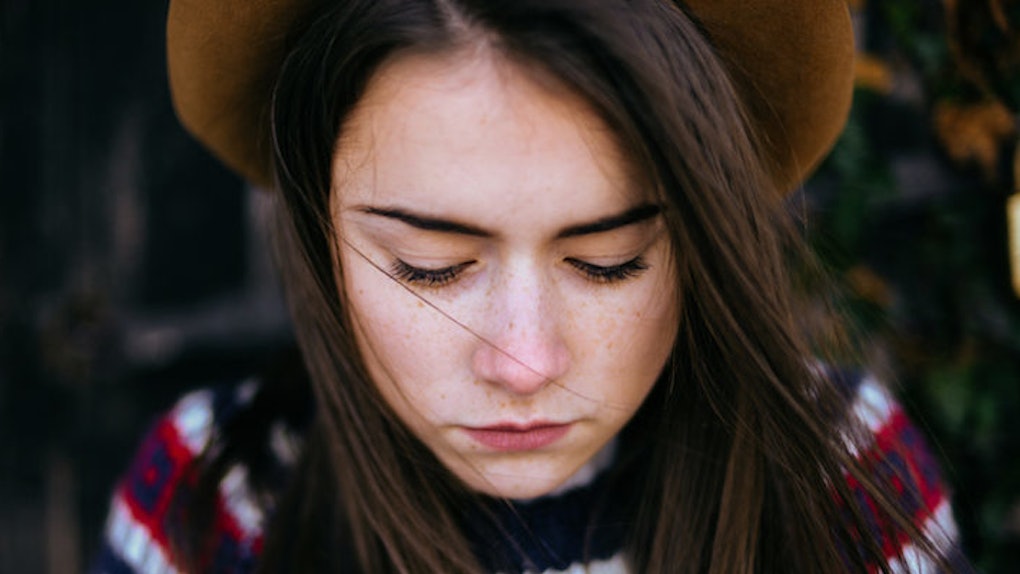 I hate that “you’re so lucky” saying.  I’m aware of the random privileges I’ve been afforded in life.

I was born in this country to lower-middle class parents, who provided a roof over my head, three meals a day, public schooling and money for extracurricular sports.

I’m half Puerto Rican, but I look more Caucasian. I’ve been discriminated against only a handful of times, and in those instances, I never felt unsafe.

It was more annoying and offensive than threatening or dangerous, and I’m thankful for that.

I’ve met some amazingly supportive and downright unbelievable people in my life. I’m able to undeservingly lean on them in the toughest of times.

I know if the unimaginable happened, I'd have a safety net of loving individuals to catch me.

I could rest on an intricately woven bed of unconditional love, endless understanding and unwavering faith until I was ready to pick myself up. I realize that is a luxury many are never afforded.

So yes, I know the cosmic cards I was inexplicably dealt are better than those of most.

I also believe that chalking my present up to the chance of the past is, if nothing else, inaccurate.

Saying I’m simply “lucky” negates all the hard work I have invested into myself and my future.

Saying I’m lucky erases the sacrifices I’ve made so I could one day sit in my living room at 11:30 pm on a Tuesday night and write about how it all payed off.

Saying I’m lucky nullifies the late nights I spent in front of a computer, exhausted, unsure and determined.

I’d pitch articles, send emails and research contact information because I was nothing if not persistent.

I’d sacrifice sleep in the name of purpose, relinquishing only to lie down for the three hours I needed in order to make it through another 18-hour work day.

Saying I’m lucky implies a level of capitulation. It assumes I accepted every “no,” believed every rejection and refused to ask “why,” “how” or “when.”

I never left it up to chance, tempted fate or implored a higher power to give me what I thought I needed, wanted or deserved.

I sewed together the pieces of a future I found behind every “I’m sorry,” “It’s not for us” and “Better luck next time”.

Saying I’m lucky erases the mornings when I washed my hair with hand soap because I couldn’t afford shampoo.

It deletes the nights I went without eating or, if I did eat, consumed questionable leftovers.

Memories of living in a micro-studio apartment, where my closet was my bedroom and my fridge was extra storage, fall by the wayside in the name of destiny, serendipity or karma.

I worked jobs I absolutely hated for bosses I couldn’t stand, doing menial tasks that were as belittling as they were boring, all so that I could pay my way until it actually went my way.

I collected paychecks so I could pursue my passion until my passion started producing paychecks.

It acts as though I didn’t deliberately establish a persistent mindset and refuse to let failed relationships, rejection letters, a childhood of domestic violence, a sexual assault or any number of inconceivable setbacks deter me from reaching what I believed to be acceptable.

It paints over the cracks that tripped me and smooths over the faults that caused me to fall, creating an illusion of smooth sailing and easy riding.

So, while I do believe in humility and the very real need to appreciate your privileges and credit those who carry you through, I also believe in acknowledging the, at times painstaking, work you’ve done to find yourself on the successful end of “luck.”

Yes, I wouldn’t find myself sitting in my living room at 11:30 on a Tuesday night, writing about how it all payed off, if it wasn’t for that kind hand of cosmic cards.

But I also wouldn’t be sitting in my living room at 11:30 on a Tuesday night, writing about how it all payed off if I didn’t decide to play them.