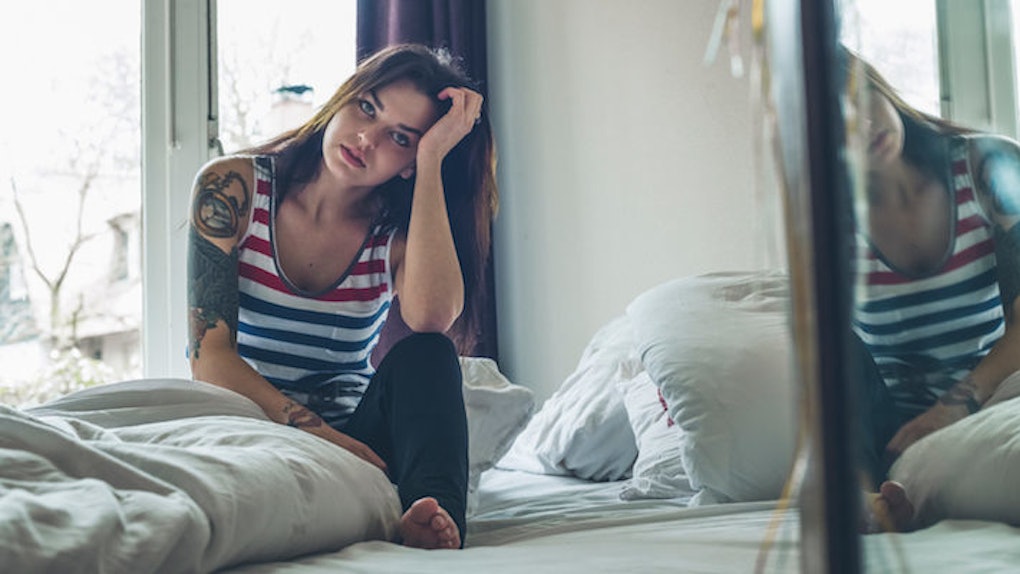 You Couldn't Care Less: How It Feels To Have Way More FOGO Than FOMO

There was once a time when we, as a society, experienced crippling FOMO.

Social media sites were not just tools used to connect with others.

They were torture devices that constantly reminded you how much of a friendless loser you were.

You'd scroll through your Instagram feed and feel paralyzing jealousy over the amount of parties you were missing and the cool events you weren't invited to.

You'd longingly browse through celebrity social media accounts and wish you could go to their red carpet events and have their VIP access to Coachella.

And then, in your depths of despair, you'd angrily stare at your own subpar Facebook page -- boring with its lack of colorful group photos, outdated with its profile picture from 2010 and dorky with its viral videos on your wall from your aunt of people doing the Harlem shake.

Whenever your life was uneventful -- or, rather, seemed uneventful on social media --  you cared. A lot. You had FOMO.

A couple of months ago, though, New York Magazine's Alexis Swerdloff changed the game.

She put a name to that feeling you get when you scroll through that party album on your Facebook or Kendall Jenner's Instagram and, instead of erupting in bouts of anxiety over what you aren't experiencing, you literally don't give a f*ck.

She called it FOGO: that Fear Of Going Out. And no, it's not an actual fear, because we all certainly enjoy a fun party with decent alcohol and good music.

FOGO is that wonderful, apathetic feeling when you're on social media, and you stash all of your f*cks in a dark ice cave, abandon them and forget about them until the summer comes and melts everything away into a huge body of water from which you drink and eventually piss out.

That's how few f*cks you give.

FOGO is that delightful indifference. It's that glorious lack of concern.

It's when you could not care less about stupid people posing in stupid pictures with stupid groups of people who they probably hate anyway.

It's when nothing about this particular Facebook album you're currently scrolling through appeals to you at all.

You know what does appeal to you instead? The Netflix tab you have open next to that Facebook tab, that's what -- which you're going to return to, right now, because the amount of f*cks you give just reached the negatives, and you actually feel your pulse declining.

You're comfortable in your own company.

FOGO is for people who are confident in themselves, who don't need to prove anything to anyone or compare what they're doing to what others are doing.

It's for people who'd rather just chill out on the couch and watch re-runs of “House of Cards” than even consider hitting the club just because it's Saturday night and you "should go out."

Focusing on your definition of a good time instead of someone else's means you've matured into an independent adult.

When you stop using other people as a standard for how you should be spending your time, you feel a hell of a lot less stressed and insecure.

You also find yourself appreciating yourself and your own life more, which is the ultimate blessing.

You realize the events haven't changed, but your perspective on them has.

Even though you're still going to scroll through social media and see the same kinds of events you used to pine over when you gave all of those f*cks, you know nothing about them has changed.

Not even a little bit.

Pictures from that wedding, that housewarming party, that weekend at SXSW with your sorority sisters that you weren't invited to will still be plastered all over social media.

Comments and captions about how fun everything was and how they all just have to get together again soon and how “omg I love my besties!” will still be there.

Thanks to your FOGO, however, you know those events have really not gotten any more fun.

The same people who dislike each other are still posing side-by-side in group pictures and small-talking as if they're lifelong friends.

The same sh*tty beer is still being served in those musty, unkempt basements.

The same hunger and exhaustion you felt at the last festival you attended and pretended to love still exists.

You're critical of the way people present themselves on social media.

You understand pictures and statuses and comments make people seem like they're having a great time, all the time, every second -- when, in reality, they're not.

No party can be that good if you're not there anyway.

You care more about your body than you do about that party.

Since you know the events you're missing really aren't that great, you don't want to waste an evening destroying your body.

What's the point of squeezing your feet into painfully high heels and wobbling around all night, staying up until ungodly hours of the evenings and drinking yourself into oblivion if it won't be for a good cause?

It's not worth it to poison your body with toxins and get blisters all over your ankles if you know you're not really going to have fun.

Besides, your party-going friends can relay anything juicy that happened the next morning, when you're laying in bed -- bright-eyed and sans hangover -- and they all have pounding headaches and raccoon eyes.

You're too cool for FOMO.

FOMO definitely had its place once in your life.

You probably felt it during your freshman year of college when you didn't have many friends yet.

Maybe you felt it when you first started at your new job, and you didn't feel like you were reaching your full life potential.

Whenever it was, you know how exhausting it is to care that deeply about what other people are doing and to have to compare yourself to them.

But now, you know it's not worth the energy, no matter what stage in life you're at.

The best part about FOGO can be computed from a basic cost and benefits analysis: Why put in the energy to go out and have a terrible time, when you can put in zero energy at all and have an amazing time?

This is simple economics. FOGO beats FOMO -- every time.

Now, pass me the chips and remote control. I have a party to not go to.