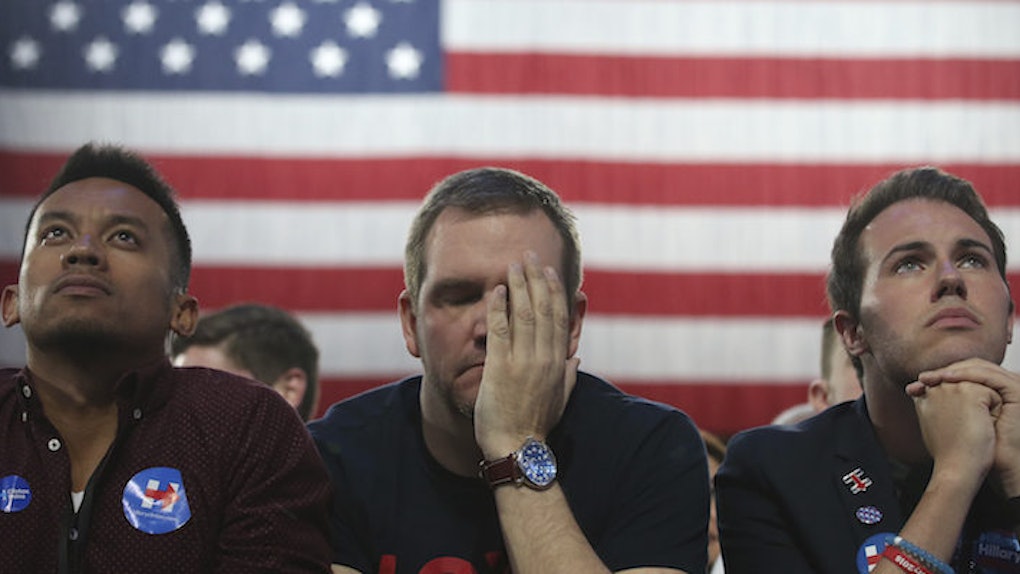 You may be on team Trump, finding yourself jumping for joy at the news of who our next president will be.

But if you voted for another candidate, whether that person was Clinton, Johnson or you just took this as an opportunity to write yourself in on the ballot, you're probably kicking and screaming in complete shock.

Some may even be under the assumption that women are the ones most upset about having Trump as president, given some of his unforgettable comments. But some men out there are equally as riled up.

Take a look at why these eight men admit they are terrified to have Trump as president:

1. He reminds me of every guy in my frat.

When I was in college, there were a lot of guys who acted like they were better than everyone because their parents had money and because they were very vain. It reminds me of Trump. They weren't nice guys, and they didn't run the fraternity well. They thought they were better than everyone else, and they didn't treat women well. I just couldn't vote for a guy for president who reminded me of guys I knew when I was 18.

2. He seems to dislike anyone "different."

I'm a gay man, and a lot of my friends are part of the LGBTQ+ community. We wouldn't fit in at all if the world was still like it was back in the '40s or '50s. We're just starting to fit in with the world now. I just felt like having Donald as president would take us back so many years and that I wouldn't feel like I belonged in the world anymore. Donald seems to dislike anyone perceived as 'different,' so how could I vote for him? I'm actually really nervous to live in America under his ruling.

When I apply for a job, I only apply if my past experience meets the job requirements. I haven't gotten jobs in the past because they told me they found other candidates who were better qualified. It made sense. So having a guy as president who has never served in the military or had a government position is just crazy to me. That's like me majoring in art history and working at a museum and then, five years later, trying to get a job as a heart surgeon. It doesn't make any sense, and I think it's just a very bad idea.

I'll be honest and say I don't want Trump as our president because he reminds me of myself. I can be ruthless in business. I can be cocky around women. I can be a little too honest a little too much. Do I think I'd make a good president? No way. That's why I feel like he'll bomb as our president, too. It's pretty odd that he made it this far.

He reminds me of myself. I can be ruthless in business. I can be cocky around women.

I'm a guy who is a feminist, and I'm proud of that. More guys should educate themselves and become feminists, too. I was voting for women's rights when I voted for Clinton. When Trump won, I immediately cried because I realized women would be treated differently, still. We live in a world where we've come too far and worked too hard to keep having that happen. Look how Trump talks to women! It's disgusting. It's horrible. It has to be ignored instead of rewarded with the top job in our country.

The main reason I'm terrified that he's president is because I don't think he knows what to do next. Like I don't even think he thought he'd win. When he found out, I bet he was like, “Oh my god, what do I do now?” I'll give him a chance, but wow. He has a lot to prove to a country that will be scrutinizing his every move.

He's had companies fold and has lost millions of dollars. He's not a good businessman. If we want to put a businessman in the White House, I'm all for it. I can name a list of guys who are more successful than Trump is at running a business and making a profit. He just got lucky.

Before the election, I was scared about the world we live in today. I honestly found myself staying up late many nights wondering if the world was going to go on with all the hate and violence we have going on. Now that Trump is president, I expect many sleepless nights and fear running through my body all the time. It's not a safe country with Trump as our fear-spreading leader.