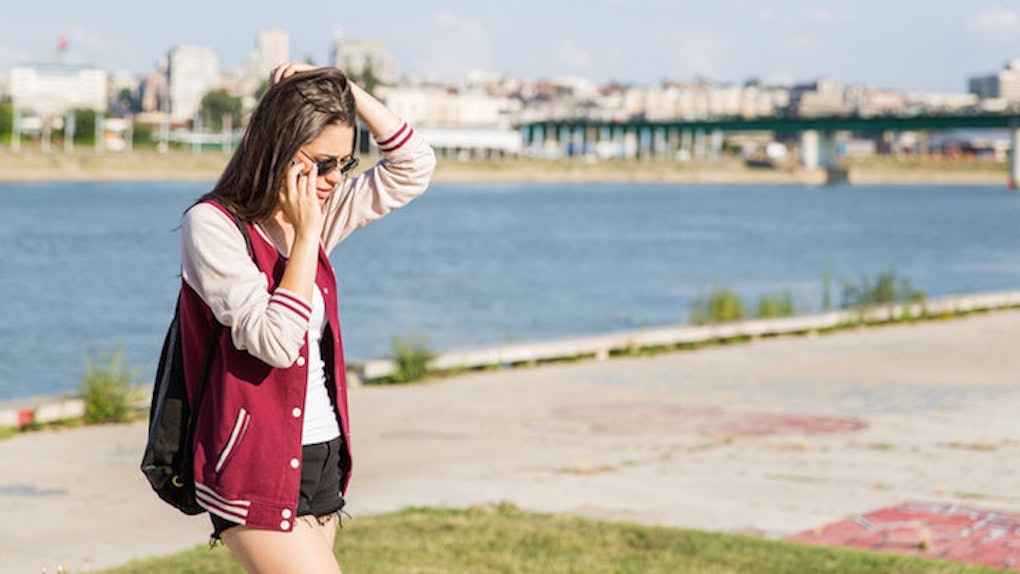 The Lost Art Of Talking On The Phone: Why We Don't Communicate Anymore

The other day, I was home alone in my apartment when the WiFi went out. The WiFi went out and I am very low on data, so to say I was on panic mode code red would be quite the understatement. WHAT was I going to do with myself?!

After a few deep breaths and about a thousand panicked texts about my misfortune, I decided to do something novel: I called one of my best friends from high school, Cori.

Not text, not FaceTime, not Facebook chat — call. I went into my favorites, pressed her name and patiently listened to the dial tone until she answered.

The thing about our relationship is that Cori and I are constantly texting each other. Even though we haven't been in the same state since high school, we've never "lost touch."

There isn’t necessarily much we need to "catch up" on, so I couldn’t help but wonder what we would talk about.

We ended up chatting for one hour and nine minutes, and it was awesome. It felt like therapy. We didn’t even talk about anything new.

We discussed the same boy, friend and work problems that we constantly texted about. But there’s a certain level of depth that simply cannot be achieved over iMessage.

Only a phone conversation has the power to shed light on those awkward feelings and emotions you didn’t even realize you had until you blurted them out mid-conversation with your best friend.

Only a phone call gives her a chance to call you on your sh*t the minute she hears in your voice that you're lying to her and to yourself.

There is just something completely satisfying about a good phone call with someone who probably knows you better than you know yourself.

I think we've forgotten about how fantastic phone calls really can be. We mistakingly think texting can serve the same purpose. But I’m here to tell you it cannot.

You can’t copy and paste a telephone conversation. You can, however, copy and paste that gif of Snooki flipping her hair to twenty of your closest friends -- all within the short span of thirty seconds.

A phone conversation is one of a kind. It is a wildly rare and fabulously distinct jewel shared only by the two of you.

I don’t read texts. I skim them. I skim them, and usually a simple “lol” or “I get that” works as a sufficient response, depending on the gist of the conversation.

“Are you listening? Okay, then what did I just say?” You won’t have the luxury of scrolling up the screen to find your answer.

When there is less time to think, there is more honesty.

John is my friend’s current boyfriend, and I f*cking hate John. What would I do if she asked me over text, “What do you think of John, honestly?” I would spend about an hour and a half carefully drafting a nice text with the help of all of our other friends, and I would lie.

But that’s not what she wanted, was it? She wanted me to be honest. On the phone, I'd have had no choice but to tell her the truth.

Even if I'd a pitiful attempt at a lie, she’s my friend, and she would hear the truth in my voice.

When there is more calculation, there is less candor.

I rock over text. I have mastered the art of gifs, emojis and witty one-liners. But none of that is me.

A phone conversation is different. Every sentence that comes out of my mouth is not going to be a perfectly calculated string of characters designed to impress you. It’s just going to be me.

People are rude over text — ruder than they often would be over a phone call.

When you tell someone “I hate you” over text, you can’t hear the heart-wrenchingly meek tone of their voice between sobs. Texting makes us numb to the consequences of our words.

When there is typing, there is no trust.

Why do people refrain from sexting? Because they worry about their privacy. What if he takes a screenshot and sends it to his friends?! There is an inherent insecurity and lack of trust that come with texting.

I, personally, wouldn’t have phone sex. I think I would laugh too much, and it would get very awkward very quickly. But I wouldn’t be worried about my privacy.

The fact of the matter is that he can’t take screenshots of your steamy phone-sex sesh. Conversations aren’t stills; they can’t be reproduced.

Text conversations don’t end; they fizzle. At any point in the conversation, one person can send a simple “lol," and the other can safely decide that “it wasn’t really the sort of text you have to respond to.”

Can you imagine if that happened on the phone? If someone legitimately laughed out loud in response to something you said, would you just think, “Oh well, I don’t really have to respond to that” and hang up?

No, because your mom taught you ages ago that that’s not what you do in a real, bonafide conversation.

When it only takes a second, you never come first.

While you can text any number of people anywhere, anytime, a phone call is special. You make a phone call when you have some time, and you consciously decide that you want to devote that time to a conversation with the person on the other end.

You call someone for one reason and one reason only: He or she is the only person you want to be talking to at this very point in time. It is the highest compliment.