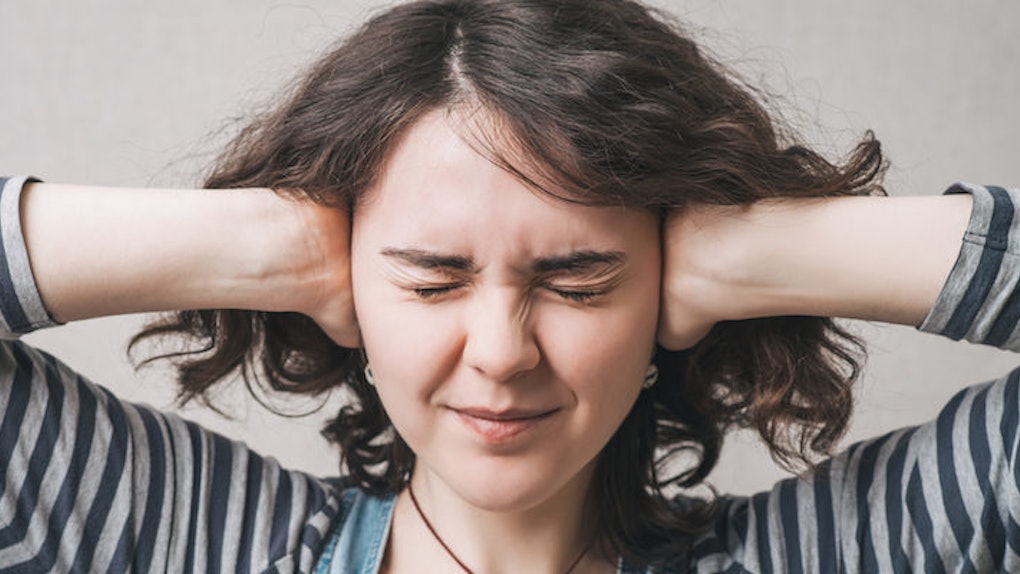 What It's Like To Live With Misophonia, AKA The Hatred Of Sound

I promise I am not completely insane and psychotic. Turns out, I am one of those people with the rarely diagnosed misophonia, or the hatred of sound. Misophonia is a neuropsychiatric disorder in which specific sounds (whether they be loud or soft) trigger feelings of extreme hatred, disgust, flight or anger.

Some feel this disorder in a deep and dark way. As written about in the New York Times, the assortment of responses to noises is “broad, from irritation to disgust to anger.”

For me, misophonia is ever-present and is a crystal clear explanation for many of the happenings of my past. Living with misophonia is a uniquely difficult experience. When was the last time the sound of someone breathing made you erupt with disgust?

The ABCs of Anger

It makes my skin crawl to think of all the times in school (from adolescence to adulthood) when someone sitting in his or her chair made me want to burst like a volcano spewing lava.

The scene: A small child seated in a navy, plastic chair. The child rocking back ever so slightly, just enough to make the plastic squeak.

The repetition of the squeak filling my ears like it was amplified. I couldn’t think. I couldn’t conjure nine times nine. All I could do was think of ways I could run up to this kid and throw him from his chair, then relish in sweet silence.

School was always a place full of these noises, a place that caused me to ball up my hands into fists. This was particularly true in regard to pens. No matter how near or far, the clicking of a pen top would worm its way into my brain and make my head feel hot.

I would often lose my place in a worksheet, no longer able to properly label the root hairs and leaf blades of a plant, and I'd scan the room for the perpetrator. I longed for a super power that would grant me the ability to grab an object with my mind and snap it in half. I just wanted there to be true silence.

Until I was 10 or so, I shared a room with a combination of one or both of my brothers. We were mostly respectful of each other’s space, so long as we each got the desired Lego bricks we needed for construction.

For me, however, nighttime held its own period of horror. With the sounds of breathing and the patterns and repetitions of inhaling and exhaling, I would lose my mind.

What felt worse was the seesaw of emotions. I would feel my entire body tense with the thick, gurgling sound of my younger brother’s congested sleep, yet when he’d become silent for minutes that felt like months, I would fear he was dead.

My mind couldn’t decide, but either instance felt like pain. I cursed the snores and quiet. In an ironic twist, I longed for a raging thunderstorm to silence all the real and imagined noise.

The same would continue as a reasonable adult sharing beds with significant others. I could turn my affection into fury simply by paying attention to my beau’s breath.

I have pondered investing in a white noise machine — to lessen the wrath felt by a swallowing sound or sniffling nose — but I fear that the pitch of the machine would make me want to throw it across the bedroom, too.

There are times when I hear a song — something full of distortion or some repetitive feedback — and I think my head may explode. It’s like when a dog hears an ultra high-pitched frequency no one else can hear. I look around and see if anyone is as disturbed as me. People usually have no idea what pains me.

Sitting in the car with my boyfriend, he’ll turn on the stereo, and I'm often accosted by a screaming sound. My initial thought is to open the door and fall right out onto the road. Road rash would surely be better than the noise.

It’s a bit of a joke on me, too, as I love the musicians around me the most. I hate sound, yet I love to create it. I've been in bands that produce these sounds. I am the drummer wearing the biggest headphones, but really, it is to diminish a lot of the sound. Please don’t make me hear it all.

Misophonia, once realized, explains a lot of my past and decisions. I always picked the bass instruments to play in school, loathing the piccolo solos or hearing the clarinets practice. A dripping faucet at night when the house is quiet makes me feel like the entire world is against me.

As a best case scenario, I only feel a deep disgust and frequent annoyance when I hear certain, sudden sounds. With years of practice in bottling my emotions, I can stifle my responses to dark thoughts and quietly uttered snarks instead of bursting at the seams.

The rage manifests in the silliest of ways, but I cannot help it. So please, stop breathing so loud.