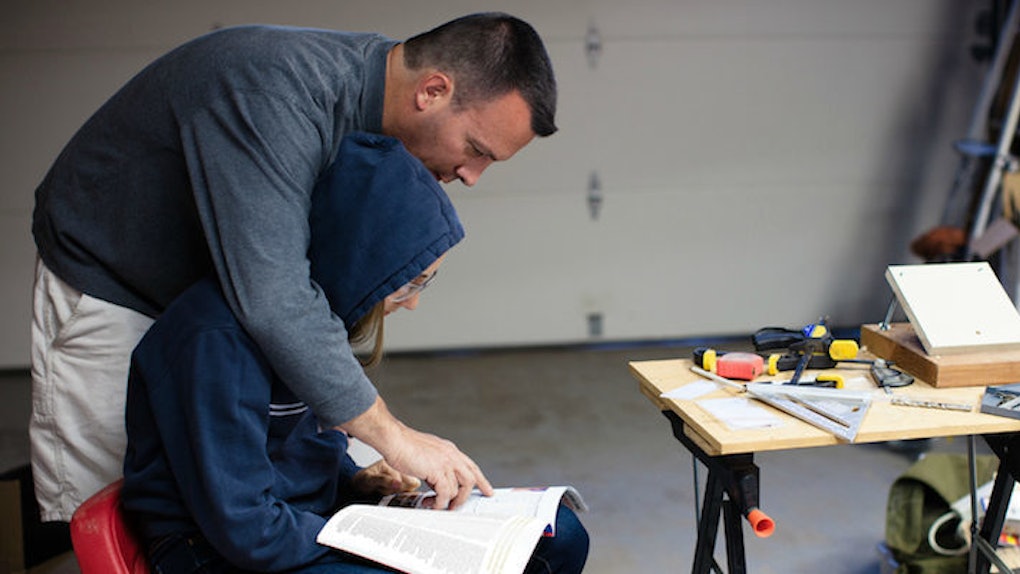 "You're going to have a tough time finding a job." This is something I heard several times.

I heard it on the news, while eavesdropping on conversations and, most of all, thanks to experiences from dear friends, who decided to take the dive into job interviews, only to find out that they lacked experience.

You've all heard it before. Godspeed for those of you going through the process.

It gets better. You can slap me, but I'm about to tell you how I was that college graduate who had high hopes and moved home. A year later, I finally found my "in" through sleepless nights, unpaid internships (at 24 years old) and applying for jobs that had no relevance to anything I wanted to do in the future.

Yes: It sounds terrifying. But I pulled through and have found a job I can see myself doing for a little while, at least until I'm ready for the next step.

So, where does my dad come into play here?

Well, listen up, 20-somethings: You may think we have it tough by barreling through every job post and holding our breaths after every interviewer says, "We'll let you know by next week."

But we have an advantage, people: We are young and able to find odd jobs. We can work our way up the ladder, which is what we should be able to do. After all, we have nothing holding us back, right? (Well, nothing besides those monster student loans.)

My dad reminded me of that during my basement living days, which I spent in darkness by re-watching "Game of Thrones" episodes and eating a lot of cheese popcorn. (I'm not ashamed.)

He got laid off around the time I graduated college, so we were not only roommates, but also on the hunt to support ourselves. I learned I had a lot of things way easier than my dad did when it came to our respective job hunts:

My father was terrible with computers, and he refused to conform to our society because we depend too much on technology. I applaud him for sticking to his beliefs. But let's face it, pops: You have to learn.

I spent my days not only updating my own résumé, but his as well. I taught him how to copy and paste (he still brags about how fast he can do this), what not to write on his résumé and how to interview.

After all, he was a business owner most of his life and a manager for some of it. But he never really had this type of education (or even interviews, for that matter).

2. I finally appreciated my education.

My father's father owned a furniture store, and alas, the family business was handed down to him in the 1980s. If you remember the 1980s-1990s era, college was recommended.

But in this case, my father felt he would be content with a furniture business in a rural midwestern town. Fast-forward 20 years later, and the lovely recession came to visit, forcing my father and grandfather to sell the business.

So, there I was, constantly finding any job I could, via the world wide web and odd jobs in my small town. I had a lot of breakdowns that year, that is, until my dad opened my eyes.

He showed me that even though I may be having a hard time, he was having a worse one. Imagine being a 50-year-old man with no college education, four kids and a mortgage. He made me see things with a different perspective.

I couldn't imagine having that much pressure. My only pressure was making my school payments.

I was thankful for his wisdom. I was having the biggest first world problems. I started to slow my roll and live in the moment.

3. The problems would follow me, no matter where I lived.

Our generation does a fantastic job of thinking we will leave college and move to some big city, fall in love and get crammed in some small apartment. But we believe we wouldn't trade that in for anything else.

But my father constantly reminded me that no matter where I moved, it wouldn't fix all my problems. I would still be in debt.

Some of you are probably thinking that this advice causes a huge issue because you have big dreams. Well, so do I.

But it doesn't hurt to have that reality stick smack you a couple of times. Realize it may take a little time. You've got to be patient and go through the entry-level jobs first. Trust me: You will be appreciated in the long run.

My dad really supported me during my long days of living in that basement, all while drooling over Jon Snow and having way too many anxiety attacks. He taught me to be patient, and I taught him how the business world rolls by giving him computer lessons each week.

We helped each other mentally, and we prepped one another. It was a long year, but at the end of it, we both received job offers in roles we could deal with for a couple of years.

Now, my dad, who earlier couldn't even cut and paste, is now the head of sales at his current company, and I am still trucking away as a content manager.

So, take a breath and realize how lucky you are to have a college education. Work hard and good things will happen.