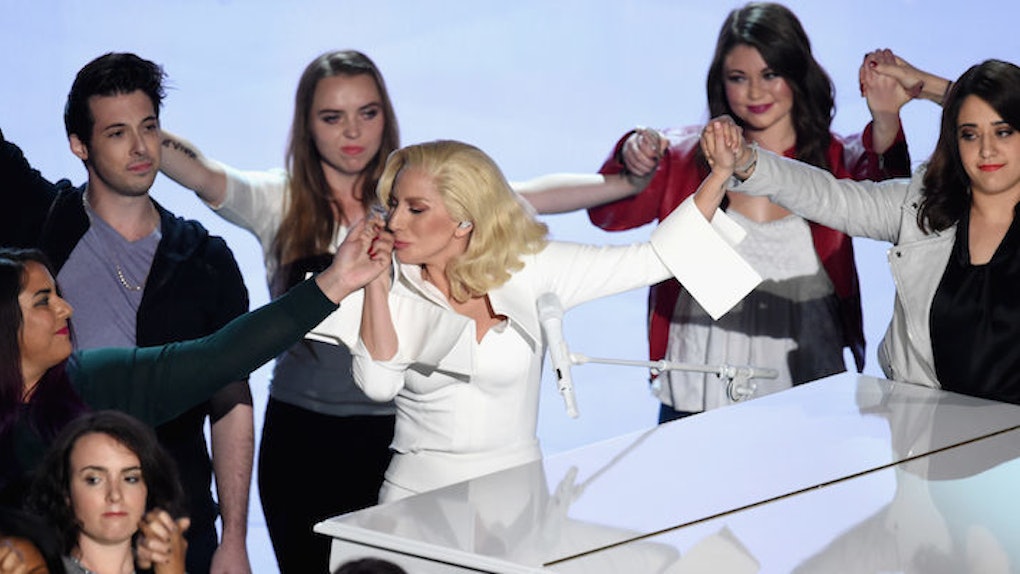 Many of us knew she was good, but last night was nothing short of show-stopping.

Back in September 2015, Lady Gaga released "Til It Happens To You," a single that focused on the painful effects of sexual assault. Last night, at the Academy Awards, she performed that single (after an introduction delivered by Vice President Joe Biden, of all people), and I wouldn't doubt that everyone in your living room went silent.

If you didn't already know, Gaga is, herself, a victim of rape. Her paternal aunt had also been sexually assaulted while in college, causing her lupus to worsen, eventually killing her.

Forget the makeup. Forget the outfits. Forget the flashy and trippy music videos and live shows. What I saw on that stage was a woman who had been put through the unspeakable. I saw a woman who was strong enough to take the thing she loves to do and knock you 20 feet back with it. I saw a woman and a piano, but I felt much more.

I hadn't heard Gaga's voice in its purest form until I heard her perform side by side with Tony Bennett. But once I did, I knew she had incredible pipes.

This Oscars performance almost made us forget everything we knew about her, though. There was raw emotion erupting from her chords. You heard the pain, but even if you thought you could feel the pain, the lyrics reminded you that "you don't know...til it happens to you."

She sang through gnashed teeth, like someone was physically hurting her as she performed. She stood up from the bench and pounded the keys as if to say, "Enough is enough!"

Till your world burns and crashes, Till you're at the end, the end of your rope, Till you're standing in my shoes, I don't wanna hear nothing from you From you, from you, cause you don't know.

About three quarters of the way through the song, Gaga was joined on stage by a large group of young women. Women who shared the same undeserved pain that she did. Perfectly normal people, with normal clothes, and hair, and faces. Beautiful people.

Our emotional struggles are not limited to sexual assault. Too many times are people stripped of what they knew to be theirs, whether it be a career, a friend, a will to keep on or control of their bodies. Lady Gaga belted out the important message that victims are not at fault, as she stood up from the bench, still playing the keys, and held back her tears as she darkly serenaded us with the notion that it is impossible to truly understand the horror until we experience it ourselves.

I am a college-age male. I have never been a victim of sexual assault. It is important for me to understand that I do not understand.

The films recognized at the Academy Awards ceremony were outstanding works of art that told incredible stories, some original and some based on real life. And they impacted their audiences in profound ways. Art has a tendency to do that.

I, however, don't know. And until it happens to me, I won't. That message goes far deeper than notes on a piano, and it is necessary to pound the eardrums of anyone it can.

I don't know how many people will be talking about her performance, but I maintain that it is the most important thing that happened on that stage last night.