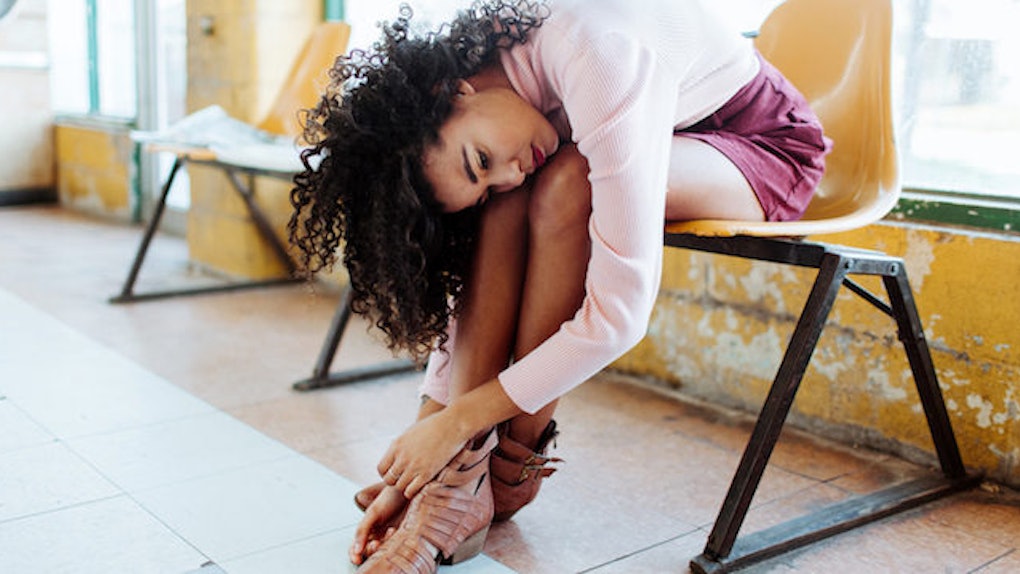 My OCD Controls Me And I Can't Explain It

For more than a decade, I've been in an abusive relationship with my own mind.

It's the kind of relationship where the other party tells you to do something, and you always answer, “Of course, dear.” Either that, or you face the consequences.

If you think about it, that's really what OCD should stand for.

I'm the last person anyone expects to have OCD.

For one thing, I'm not at all clean. I shower once every three to five days, maybe more if I work out. But never every day.

I wash and/or change my bed sheets once every six months at minimum, even if I ate dinner in the bed every day and had a few rounds of mono sweats in my sleep.

I eat food off the floor. I've been known to eat raw meat when I don't feel like cooking. In college, I once gathered all of the dust that had collected on my floor within the past year, put it in a Ziploc bag, hung it on my wall and named it George the Dust Bunny.

Basically, my fear of germs is nonexistent. Germs and I are friends.

But the kind of OCD I have doesn't involve any level of cleanliness. It's all about intrusive thoughts that lead to compulsive actions.

If I don't see that corner, I can't sleep. God forbid there's something obstructing that corner, like a sock I left in front of the door because I only do laundry once every two or three months, and prefer to dump the clothes on the floor rather than putting them away.

Sometimes I look at the door from an angle my mind has deemed unsatisfactory, and I don't realize this until after I've lain back down. So I sit up again, and the process repeats.

I can never have my hands in the same position at the same time.

Most people don't notice it, but my clapping looks funny. Having your hands in the same position at the same time is what you do when you're praying.

And when you're praying, God can hear you. So let's say I have my hands in the same position at the same time, and some intrusive thought pops into my head, like “Everybody you love is going to die!” (Ugh. Typing that felt horrible.)

Well, since my hands were in the same position at the same time, God was able to hear that thought. And now, maybe everyone I love will die, and it will be all my fault.

Of course, this is completely illogical, and I'm well aware of it. But, like… what if they did all die, and all I had to do to prevent it was keep my hands in different positions? Just bend one finger! Better safe than sorry.

I have a mole on the back of my neck. One day, my brain told me that if I ever touch the mole, I will get cancer. However, I can reverse the cancer by squeezing the skin around the mole until the cancer's gone.

So, whenever I accidentally touch the mole in some way -- say, tying up my hair-- I squeeze the skin around it. And then it's all OK. (Just writing about this makes me need to squeeze that skin for some reason. Hold on just a sec.)

Because of my nails brushing against the skin when I squeeze it, I've gotten huge, dry, patchy red rashes on my neck, which I've needed to use steroid cream to eliminate.

But, on the bright side, I don't have cancer.

The big one, which governs most of my illness, is probably the most difficult to describe.

My brain has decided that I must always leave everything I touch moving with a downward force. I know that makes no sense. Basically, I have to look at everything top to bottom.

If I stop looking at something with my eyes pointed at the top of it, I have to look at it again, this time moving them downward, before I can move on to something else.

As a result, my eyes often tend to look like they're twitching, and I can have trouble maintaining eye contact. I've already had to stop multiple times while typing this essay to move the cursor along different letters, from top to bottom.

In this case, after I've already passed the person, I have to turn around and look at them again (and again and again) until I've gotten it right. As a result, if you watch me carefully when I'm walking somewhere, you'll often see me turn my head at random times.

It's especially bad with photographs.

Let's say I walk past a picture in a frame on my shelf, and I look at one of the people in it from the wrong angle. Now, the threat is even more specific: that particular person could die!

So now I have to move the photo around, tilting it back and forth and side to side, until I feel that I have restored the force to moving in the right direction. It sucks, too, because I love having photos all over my house.

I guess the “logic” for all this is, as people, we are more vulnerable at the top than the bottom.

Basically, it's equivalent to shooting everyone in the head. Which, again, means everyone I love will probably die.

So I'm constantly “correcting” things, to make sure their force is always moving downward. Let's say I'm looking up at my dresser from a low angle, because I'm lying in bed.

That means I looked at it from bottom to top, which my mind says is unacceptable. So I sit up in bed, or kneel, or stand, until I can see the top of the dresser looking down.

Sometimes, if I look at something too hard from the wrong angle, I have to get up and touch that object on its top, pressing the force downward. I hope any of this makes any sense at all.

Of course, beyond these oddly specific behaviors, I also have more relatable issues, like my legs shaking when I get off the el train because every bump or turn in the ride obviously meant we were all going to get derailed and die.

Or worrying that every time I get a cold, it must actually be AIDS, because the only reason I'm getting colds is that my immune system is so weak. Or worrying that, if someone doesn't respond to my text quickly enough, it must mean they've gotten in a terrible accident.

With this one, I've gone as far as to look up what transit accidents happened recently and mentally plan my day assuming I'll need to take off work and rush to the hospital.

Basically, any slightly wrong move can lead to pain, sickness, or death for me and everyone I care about. That's what my brain tells me anyway, so that it can keep making me do whatever it wants.

It threatens me with all this suffering, and sometimes I want to call its bluff, but I can't, because on some level, it's still someone I have to trust.