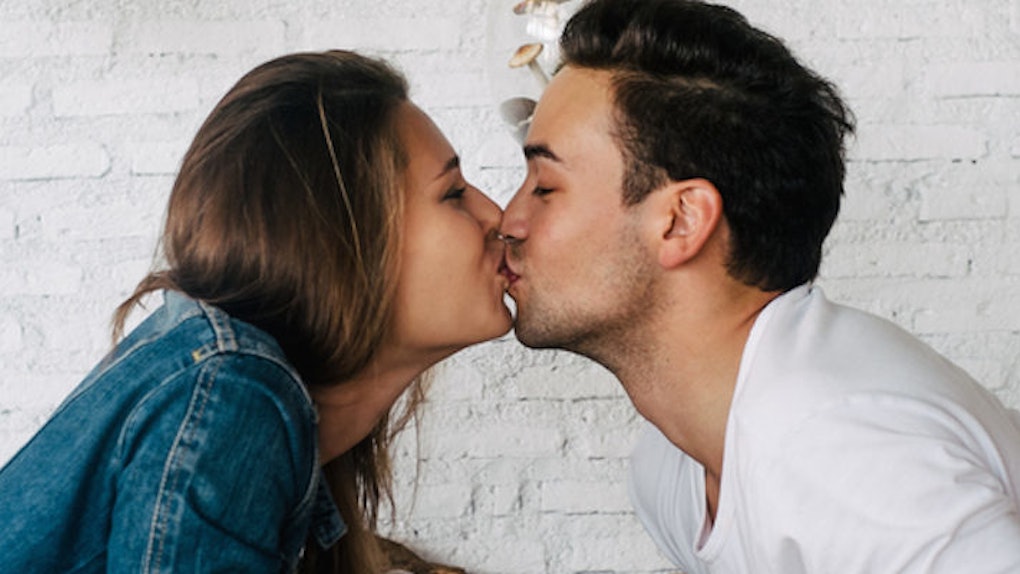 Like most normal, sexual beings, I am a big fan of kissing. Nothing is more appealing than a big old makeout session with someone you are seriously digging.

I mean, getting to swap spit in a tantalizing and borderline grotesque lip lock is pretty much what I live for.

But the last time I was kissing a hottie with a body, I remember thinking about mouths. Mouths are weird. And yet we want to put our mouths onto other people's mouths. It is in our nature to want to lock face holes with the face holes of the people we deem attractive.

According to Kristina Fiore, in an article for LiveScience, the reason we like kissing is because of ~pheromones~ and sh*t. Our bodies are doing the groundwork for our brains, trying to find us a mate on a physical level.

"When our faces are close together, our pheromones 'talk' — exchanging biological information about whether or not two people will make strong offspring," Fiore says.

But Jason Tetro, microbiologist, Bio-K Plus advisory board member and author of "The Germ Code" and "The Germ Files" tells Elite Daily there's more to kissing than simply being attracted to someone:

There's an invisible factor in human relationships, but it's not love: it's germs. The trillions of microbes living in and on our bodies can be the difference between a great date or a noxious nightmare.

With flu season quickly descending on us, let me be the one to point out what I think is pretty obvious: Kissing is actually f*cking gross.

Bad breath is such a massive deal breaker. Tetro tells us that seven out of 10 people would end a new relationship due to bad breath.

If you're wondering if you have bad breath, you probably do. Sorry (not sorry) I had to be the one to break it to you, because I possibly just saved you a lot of mental stress and heartbreak. You don't want to be the one not getting your D wet because you were plagued by an overwhelming influx of grossness.

There are literally billions of bacteria inside of your gaping mouth hole, my friend. An estimated 500 to 650 different kinds of bacteria dwell in the inner regions of your talk box. And they are hungry like you. And they poop like you, too!

When oral bacteria are ejecting waste, it goes straight into your mouth. Some of these waste molecules are quite smelly; they are known as volatile sulfur compounds and are responsible for bad breath.

Are you puking yet?

The good news is that not all bacteria are bad. Even if you are are blessed with good oral health, Tetro tells us that the tasty bacteria on your tongue might even increase compatibility with your sexy suitors.

Your mouth is a living, breathing organism of weird.

Your mouth is alive! It's alive with lots and lots of GERMS! IT LIVES!

According to Tetro, you can literally change the bacterial makeup of another person's mouth within 10 seconds of kissing:

When we kiss for extended periods of time, we are sharing millions of bacteria. One study showed it could be as high as 80 million for a deep, 10-second kiss.

After a long enough hot and heavy makeout sesh, your combined bacteria make what's called a "biofilm." Tetro assures us you can usually brush off this new and altered bacterial construct.

BUT if you end up spending the weekend sans toothbrush and with a lot of heavy petting, your biofilms might become more permanent, and "the bacteria may form a sturdier community and eventually become part of the mouth's microbial population."

Your love (your love, your love) is my drug.

You know how when you're kissing someone really delightful your mind goes straight into the clouds? Well, that's because kissing does actually make you kind of high.

While kissing, your serotonin levels decrease, and serotonin is a hormone that helps dictate emotional behavior. When serotonin is decreased, we're more likely to make moves on the object of our affection.

If you want to know if you really dig someone as opposed to just digging what his or her hormones do to your hormones, you have to let oxytocin and serotonin balance (aka: Stop kissing, and start getting to know each other).

According to Tetro, "When oxytocin and serotonin levels are balanced, decisions are made because of compatibility, not hormones."

Stop f*cking kissing people if you're sick, you f*cker.

Tetro says that mouth is an ideal place for viruses to grow. It has water, food, cells and a warm internal climate, making it the perfect home for germs during flu season.

Though he assures us that while the mouth is "ecologically rich," it is not all that dirty. In fact, the mouth contains the "mucosal immune system, which has several ways to keep pathogens at bay."

Unless you're sick, that is. If you have a cold, don't be a dick. Don't go around spreading your gross germs.

If you're infected, just stay the hell in bed. As Tetro says, "There'll be time enough when you've recovered to make up for lost time."

Pro tips for good oral hygiene: Brush your teeth twice a day, chew gum for two minutes at a time and take a liquid probiotic so you can coat your mouth in good bacteria and let them settle on your tongue.