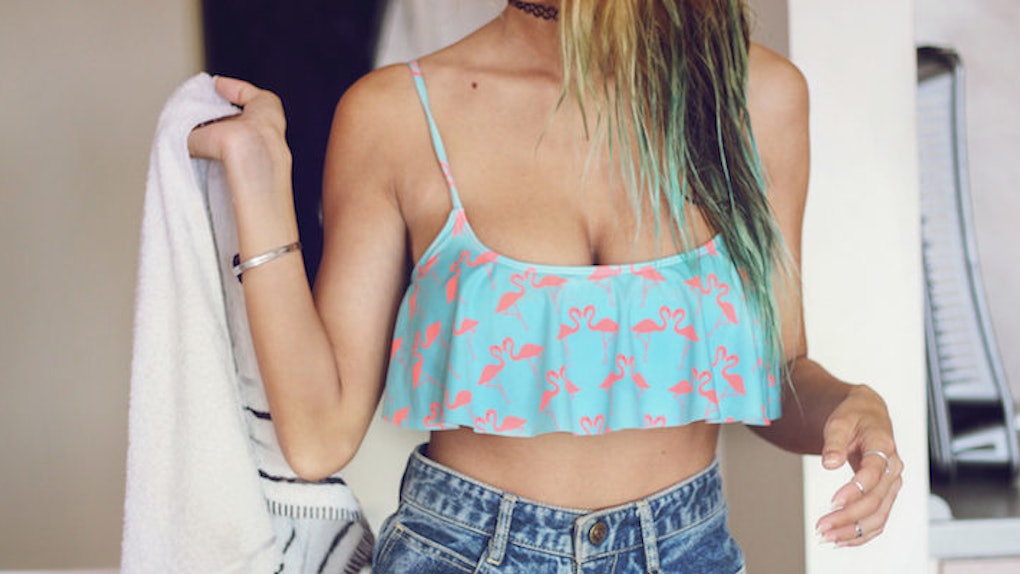 Girl creatures sifting through the great expanse of the universe, I SO get it. Sexual insecurities are screwing up your sex life. Trust me, they've put a dent or two (or TEN) into my own sex life as well.

We all have our sexual insecurities. If a girl tells you she's never had a sexually insecure moment in her entire life, she's f*cking lying. That's like saying you've never felt hungry, or tired or upset. We've all been hungry, tired and upset. And we've ALL been sexually insecure.

Even that "flawless" blonde bombshell at work with the visible abs and the kale smoothies at lunch has felt sexually insecure. Why do you think she's drinking that kale smoothie in the first place?! Because she's worried about calories and is insecure about her naked bod just like the rest of us, babe! We're all in this mess of a girl life together, regardless of our different window dressing.

I mean, how is it possible in this f*cked-up society to NOT be f*cked up about sex and bodies? One minute, the media tells us that beauty is the super skinny, hip-less, vacant-eyed Kate Moss, and the next minute it's the impossibly curvaceous, massive-breasted, full-lipped Kim K.

So, yeah. All this sh*t has made us feel insecure. However, ladies, we CAN turn this ship right around and steer it in a more positive (and more orgasmic) direction. That's what's so kick-ass about being a girl: All the sh*t we've been through has made us tough, and we have the power to change the sex game.

The other day, my female co-workers and I were discussing our sexual insecurities during one of our brainstorming sessions. And we collectively shared our personal tips that have helped us overcome them. So I decided to share the ~love~.

No, we're not sexperts. But we're all REAL girls with REAL bodies, REAL insecurities and REAL sex lives. And sometimes a little real-girl-to-real-girl talk is all a chick needs.

So here they are: tips to help you overcome each of your specific sexual insecurities.

1. For when you feel insecure about how you look.

I get really insecure about my body during sex all the time. And it's awful because it pulls me entirely out of the heat of the moment. It's impossible to have an orgasm when you're feeling wildly self-conscious and unattractive, you know?

Focus on how good it feels to be touched. This is exactly what pulls me back into the moment when I'm feeling disconnected from my body.

And remember: At the end of the day, sex is about feeling, not about modeling perfect body parts.

You're also a far better lover when you're uninhibited and free to get lost in the moment.

2. For when you're worried that you're taking too long to "finish":

Girls get orgasm guilt all the time. Sometimes, it can take awhile for us to get off, because we're complex, multi-faceted girl creatures who can't just FINISH at the drop of a hat like boy creatures can.

But hey, don't worry at all about taking your sweet orgasm time! Remember that it's HOT to get someone else off. Humans are attracted to body parts, and your partner is just excited to be getting down and dirty on your bod, babe.

Your partner is probably basking in every precious minute of pleasing you. It's A GIFT.

3. For when you're worried about being on top or on bottom:

Being on top can be a little jarring. You're the one leading the motion of the ocean, and it's easy to feel like maybe you're doing it all wrong. But then, if you stay on the bottom too long, you start to shame spiral. Like, what if you're deemed a lazy pillow princess (a particularly brutal rep in the lesbian community)?

Just remember that sex is give and take. You give a little, you take a little. It's a two-way street. You can exert a lot on top and take a lot when on bottom.

I think versatility is the key to being a good lover anyway (lesbians, take note).

4. For when you're worried about being "perfectly groomed":

Trust me, most people don't even care about you having perfectly smooth, hairless legs when you're getting hot and heavy beneath the sheets. They're more involved in the heat of the moment. You in your gorgeous entirety are a hell of a lot more than just a few hairs.

Remember that someone would rather have sex with imperfect you than not have sex at all.

5. For when you're worried about how you taste/smell:

We've all had this insecurity. Mainly because society has drilled into us that our natural girl smells are BAD, and that we need to purchase DAISY-SCENTED vagina wipes to wipe away the grime.

Girl. This is not true. I've been down there, and as long as you're a healthy person with regular bathing habits, you're FINE.

In fact, in the context of SEX, those smells and tastes are actually really f*cking sexy. I'm not being raunchy. Sex smells sexy when you're having sex. Out of context, sex might not smell the greatest, but in the heat of the moment, it's a massive turn on.

6. For when you're worried that you don't know what the f*ck you're doing:

Kittens, despite the fact that I write about sex on the internet, you might be surprised to know that I'm cripplingly shy in real life. Ask anyone I've ever been on a date with, and they will all attest to my irritating shyness. And I can also be really shy in bed.

But you know what my mother once told me? She said, "Zara, darling, if you're feeling shy, just ask people questions. Direct the focus on the other person, not on yourself."

Well, turns out -- much to my teenage self's dismay -- that Mother Dear is ALWAYS right.

When I feel like I don't know what the f*ck I'm doing during sex, I just direct my energy to the other person. I stop worrying about MY body and focus on the beauty of THEIR body. It helps.

Also, when in doubt, just pretend you're a confident, experienced, coveted sex goddess. I do this all the time. Sometimes, you just have to fake it until you make it, baby.