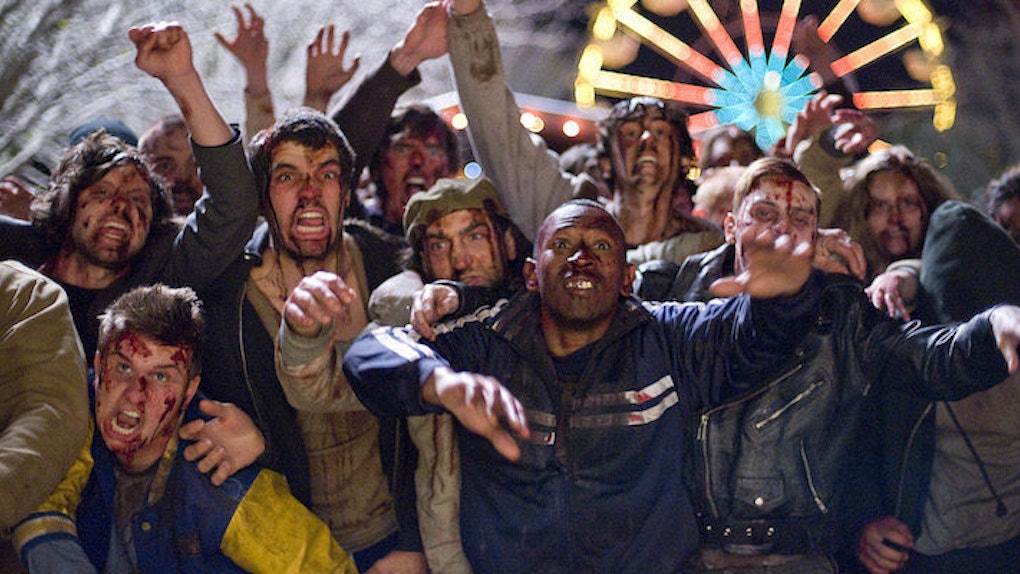 Success Of The Living Dead: 7 Habits Of Highly Effective Zombies

Zombies may not be pretty, but they're effective AF.

The seven habits of highly effective people? Pshh, that's so '80s. There's another — albeit highly unlikely — source I think you could learn a whole lot more from.

Yep, I'm talking about zombies. They might not be pretty to look at, but there's no denying they're still some of the most effective former humans around.

All this time, you callously thought zombies were good for nothing more than your entertainment, didn't you? You laughed as they tore apart your least favorite movie character, cried as they successfully took a bite of your favorite TV actor and cheered as your beloved book protagonist narrowly escaped their clumsy clutches.

But did you ever stop to think that zombies could actually teach you something? Zombies may not have feelings too, but they are quite savvy when it comes to getting what they want.

Decaying flesh and rotting teeth aside, there's a lot we can learn from the undead. If you're ready be effective AF, here are seven zombie habits you need to adopt:

Can you imagine how strange it would be to see an insecure, self-doubting zombie?

To be fair, zombies are devoid of feelings, but that's beside the point. When it comes to getting what you want, your attitude could benefit from an undead overhaul.

Someone ghosted you, and now you're "so over" dating? If you've bombed a job interview, will you now give up on the career you've always wanted?

Don't let defeat stop you from trying again, again and again. Pursue your dreams like a zombie would: relentlessly and without the fear of failure.

2. Get the respect you deserve.

Say anything you want about zombies, but when it comes down to it, the one thing they'll always have is your respect. You innately know that if you see a zombie, you have two options: Get the hell out of there, or kill it. There's no in-between.

Zombies are incredibly good at their job (seek out humans, eat them or turn them into zombies), and humans have come to respect and fear that. In somewhat of the same vein, if you work hard to gain the respect of those around you — from your co-workers to your friends — you'll go a lot further in life.

Would a zombie ever leave a job undone and give up? Of course not. While they can be a little gross to watch, zombies are as thorough as they can possibly be, day in and day out. In fact, the only thing that'll stop a zombie from eating every last bit of a victim is a shotgun blast to the head (or an ax, or a crossbow).

While you'd never want to be so thorough that someone has to kill you to get you to stop doing something, taking even the slightest undead approach to the things you want in life can be a good thing. When you're as thorough as a zombie, you're more effective. Just try to be a little less messy in your approach.

One of the best (or worst) traits of a zombie is the fact that those dead bastards can hear better than any living creature around. Oh, a baby is crying 5 miles away? A person accidentally dropped a plate on the ground? You can bet your clumsy ass that zombies will be on the move and arriving shortly.

How fast they arrive, of course, depends on if these are the dumb, slow zombies (my personal fave) or the smarter, faster zombies (you don't stand a chance). Either way, becoming a great listener will undoubtedly help you learn and grow as a person. Assuming you don't have rotting flesh, you can even do it without terrifying the people around you.

Their hearts may no longer beat, but somehow, zombies have stolen a little bit of ours. Movies about the undead kill at the theater.

"The Walking Dead" slays audiences every season. People even write weird zombie-themed blog posts, all despite the fact that the undead are truly relentless killing machines with freakishly good hearing.

What does this prove? Zombies must have a certain "je ne sais quoi," or they wouldn't be such a big part of popular culture today. Zombies, with their blood-soaked clothing and rotting flesh, are somehow still able to charm us into continually giving them ratings.

Of course, being charming in a human's case can have a slightly different outcome. When you're a charismatic person, you'll go further in every aspect of your life, from scoring that big promotion at work to making that cute guy or gal you matched with on Tinder actually want to meet you IRL.

Most zombies travel in packs. Granted, you may see a lone straggler here and there, but for the most part, you can consider them to be (undead) herd animals. Why is this?

Well, zombies are stronger and much more effective when in a big group. One zombie in a field? No problem. Ten zombies in a field? Time to run.

The same goes (somewhat) for humans. When you team up with other humans, you collectively become much stronger.

Whether you need someone to be your wingman (or wingwoman) at the bar, need a whole sh*tload of friends to help you move from your third floor apartment to a new place across town or need your pals to pick you up off the floor when you've been dumped, a squad you can count on is an essential part of life.

Hey, if there does happen to be a zombie apocalypse at some point, you'll at least have a bunch of new friends around to help you shoot all those relentless zombies in the head. (Just hope you get the dumb and slow kind.)

7. Dare to be different.

Maybe the reason zombies have remained popular over the years is because they are so different from all other monsters out there. After all, there are ghosts, demons, vampires, sea creatures — you name it — but none of them just flat-out stalk humans 24/7 like zombies do.

Humans are never fully safe from zombies, no matter where they are, what time of day it is or what type of weapon they have to protect themselves. (Unless you get that coveted, right-through-the-forehead shot.)

The very habits that make zombies different from other monsters are the same ones that have made them strangely likable. Being different, unique, special or whatever you want to call it sets you apart. Yes, you may take a risk, but the alternative looks a lot like getting in line behind all the others who have chosen to play it safe, and hoping, somehow, you still get noticed.

Whether it's a new hair color, a different fashion style or an out-there idea for an app you think will be more popular than Snapchat, when you dare to be different, you dare to go further than all the rest. You just might tear apart the competition (figuratively) while you're at it.

What we've learned here today is simple: Nobody puts the undead in a corner. Zombies fight for what they want, and they usually always get it. That's because nothing — and I mean nothing — can shake their confidence.

Isn't it time you attacked your day with the same mentality? In fact, applying these habits to your life, both professionally and personally, will help you to become a more effective, happy and successful person overall.

Food for thought: How is it possible that brain-dead zombies can teach the living so much? Which of the seven habits of highly effective zombies will you be stealing from the undead?

This article was originally published on Scott's Marketplace.