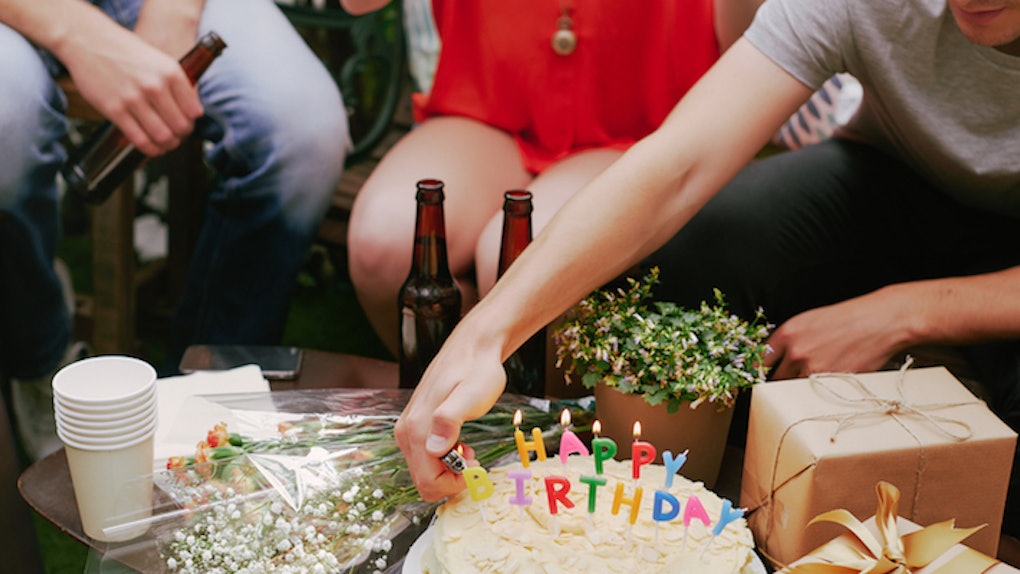 On September 26, I had the distinct honor of turning 30 years old. I know the word “distinct” probably isn't the best word to use, but sadly a lot of people don't hit the 30 year mark — like Miami Marlins star pitcher José Fernandez, who was tragically killed in a boating accident at the age of 24.

So, really, those of us who reach age 30 need to count our blessings. But now that I've succeeded in bumming everyone out, let's go back to a more fun topic -- birthdays.

So I turned 30, but did I have a big blowout celebration? No. I went to work, took my grandmother to two doctors' appointments and then settled home to eat a sausage and peppers hero as I watched the presidential debate. One hell of a celebration, right?

Most people would say that's a pretty boring birthday -- but that's actually normal for me.

My birthday has always been a low-key affair, even when I was a little kid. You know what they say: At 16 years old a young girl gets a big party. At 16 years old a boy gets a pat on the back and a swift kick in the pants. And it's true -- most men  get the short end of the stick when it comes to birthdays.

Even in grade school, I remember a bigger fuss was made over girl's birthdays than us guys. Girls would come to school with a plethora of balloons that ceremoniously said “Happy Birthday!” while the closest thing us boys got to anyone noticing our special day was a new basketball jersey.

Those lackluster celebrations in our formative years really do set a tone. That's why it's so hard for guys to really celebrate their special day. Society has basically said "Meh," about our birthdays, so we just roll with the punches -- literally punches, as that's how teenage boys show affection.

However, birthdays are a special affair, so here's a few proposals for men to make their birthday more of a big deal.

It's your birthday, so say something.

This may seem like a no-brainer, but over the years I've realized guys are terrible at letting people know their birthdays are coming up. I even know some guys that actually try to hide their birthdays so people won't make a big deal.

Let them make a big deal! I'd say the perfect time to start dropping birthday hints is about two weeks beforehand. Just say, “Hey my birthday is coming up!”  and you'll be surprised at how many people instantly want to make plans. See? Now you have an event brewing. So party like it's your birthday because, hello, it is.

For most of my career, I've had the honor and privilege of working in female-dominated environments. Many women I've worked with wore a special outfit or a special hair style on their birthday. They always added just a little something out of the ordinary to bring light to their special day.

I think us guys need to do that. If you're usually super casual at work — throw on a blazer! Your coworkers will be naturally intrigued and then you can tell them why you're all dressed up. Hey, I bet by lunch time you'll have a cake to show for your efforts, and who doesn't love cake?

Become the master of your own domain.

Sure, you can rely on other people to make your birthday special, but you're setting yourself up for disappointment. No one knows you quite like you. So why don't you take it upon yourself to make a big deal about your birthday?

I know we're guys, and I know we like to play it cool. Sadly, though, playing it cool often leads to playing it bored. So tell your close friends and family you want to go to a baseball game or catch the latest superhero flick or try that cool new restaurant.

People flock to leadership, so you have to step up to the plate and let people know exactly what you want to do.

Refer to your birthday as your Name Day.

Seriously. Name Days are what they call birthdays on "Game of Thrones." That show is awesome. Need I say more?

Look, everyone likes to feel special, especially on the day they came into this world. Even though we all share our birthdays with millions of people, it still feels like a big day all about you. Guys deserve that special feeling, too.

So guys, start celebrating and don't be afraid to show yourself that special birthday love. Seriously, free cake will probably be involved. There's no better incentive than that.