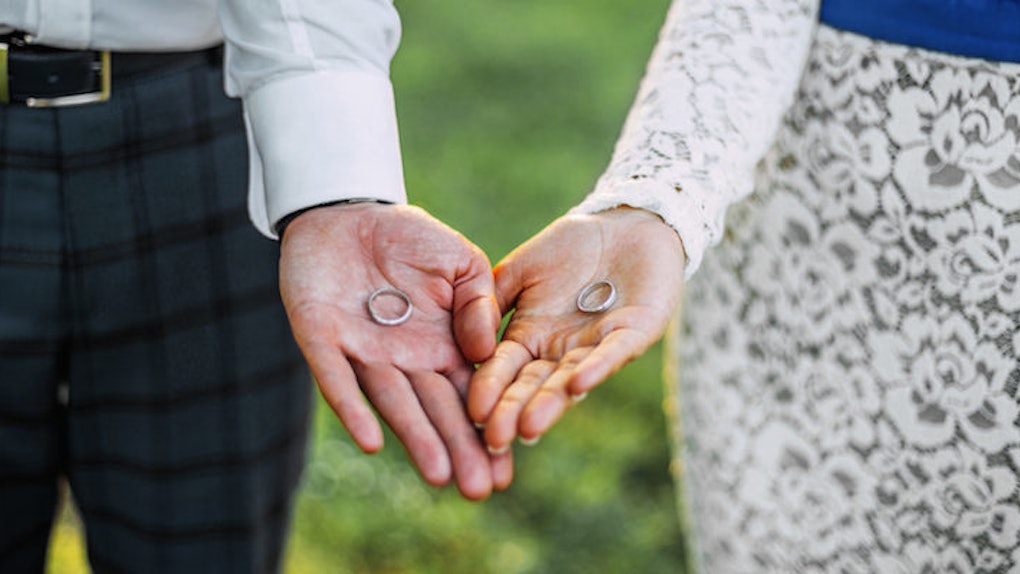 Everything You Need To Consider After A Green Card Marriage Proposal

I have to rewind three years for you to get the full story. I was 20 years old, interning in NYC and working through the fact that my college ex was dating a girl who was arguably hotter than me.

Rather than feel bad for myself, I decided to take my first dive into the true, adult world that is the NYC dating scene and man, I bounced back from that heartbreak quickly.

Through the whole summer, I dated this amazing and charming British guy who was not only the most romantic guy I've ever known, but also hailed from royalty, which drastically increased how often I fantasized about being a princess.

There is nothing bad I can say about our relationship, but the spark just wasn't totally there. When I went back to school in September, I admittedly got sucked into the immaturity that consumed my campus and we drifted apart. It was a shame.

Fast forward to today. We've seen each other a few times since, and periodically check in with one another to catch up. It's cordial and it's nice, but I secretly think about what it would be like to get back together. I mean, he told my mom he loved me, so it wasn't that far fetched in my mind. So imagine my excitement when he invited me out last week and told me he had something he wanted to ask me.

I met him at his penthouse apartment on the Upper East Side (yes), he was dressed up in a suit (hell yes) and we headed out to a nearby restaurant. To my surprise, however, we did not have a reservation, and so we sat at the bar.

At that point I was like, OK, what's going on? This is less romantic and charming than I remember, but the night is young. A few jalapeño margaritas later, and we had gone through the chit chat about work, friends, travels, etc. and he finally brought up that he had something important to ask me.

Being the cheeky assh*le that I am, I was like, “before you say anything else, YES, I will marry you!” Turns out my joke was not that funny, because after a 10-minute explanation of his current status as an immigrant, he did in fact ask me to marry him for a green card.

He made it clear that it would strictly be so that he could remain in the country he considers his home, and I wouldn't need to do anything other than sign a piece of paper and go on a fake honeymoon with him. I told him I needed to think about it before responding in any sort of way.

So I did what I usually do when someone proposes to me out of thin air, and made a list of pros and cons:

I mean, first and foremost, I would be married to a descendent of the royal family. Distance from the throne is of no importance; I would make everyone refer to me as The Duchess of New York.

My obligation would only be a two-year marriage, which doesn't seem like that long of a time to pretend we're together on paper. I mean, I was pretending to have orgasms for a full three years with that guy from college, so not only is time relative, but also his beautiful girlfriend was probably miserable, which makes me feel better.

Another factor I considered in the proposal was getting a big fat paycheck. To be honest, I'm currently sitting on my couch in pajamas on a Monday afternoon writing this, so you can probably guess what my employment situation is looking like.

Many girls fantasize about their weddings; I fantasize about my honeymoon. Travel and sex are likely at the top of everyone's “favorites” list, so I think the honeymoon deserves more attention. And getting a free faux honeymoon after this doesn't sound like a bad perk. Like I said, I have nothing bad to say about my relationship with this Brit, so I know I would have fun on a little getaway.

Stuck in a loveless marriage

When I think about the man I'm going to marry, I always give myself at least 10 years before I lose my passion and start to fantasize about our Uruguayan pool boy. This would be entering a union that from the start is not based on actual love, but is a transaction of sorts. Not to mention, I'm already fantasizing about this Uruguayan waiter I met last weekend. Joaquin, please text me.

All risk, no reward

What if I meet the guy I want to marry a week after tying the knot with the Brit? I'm basically risking a normal, healthy relationship for what? No white dress, no gifts, no open bar. Not worth it to put my life on hold just to save an old fling from getting deported back to his castle in England. Boo hoo.

There's also the obvious point that this is extremely illegal. I was arrested as a teen for peeing outside of my beach house (I was locked out) and honestly, going to jail once was enough for me. I was traumatized and haven't been able to use handcuffs in a fun, kinky way since.

I also considered the scenario where a fake marriage with my former British beau would play out like a cheesy romantic comedy, and we would actually fall back in love and stay married. Then I remembered that every time we fooled around in the past, I didn't feel much going on down in his boxers. And I'm not necessarily saying that I couldn't be with a guy that has a less than impressive penis, but a psychic told me I'm supposed to have three sons, and I just can't subject them to that genetic misfortune.

So, I've weighed my options and made some decent points on both sides. But it really boils down to one thing: The first time someone asked me to marry them was over sh*tty margaritas while my stomach was growling, and there wasn't a diamond in sight. So, no, you inconsiderate f*ck, I will not marry you.