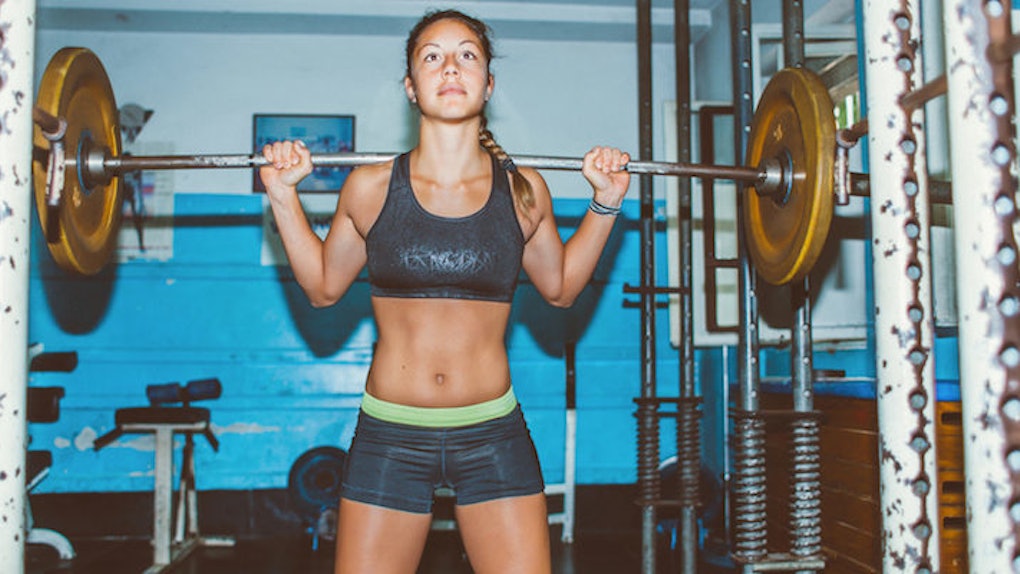 The New Fitspo: Why Girls Should Get Strong, Not Skinny

I am, hands down, the laziest person you’ll ever meet.

Leisure activates for me include sitting, reclining and scowling at the outside world from my bedroom window.

However, tired of looking like a melting Play-Doh figurine who pants and sweats at the slightest incline, I have decided to get in shape.

This is by no means a new goal for myself.

I have tried to get in shape countless times, going on runs and attempting to get a slender physique like the celebrities we see frolicking in bikinis in magazines.

It never works, though, because like many women, having a tanned and toned body isn’t motivation enough for me.

This is the problem we need to address when it comes to fitness and females: We’re encouraging exercise for the wrong reasons.

Slowly but surely, women the world over are increasingly defiant to fit unrealistic beauty standards.

Instead of striving to be the size 6 seen in magazines or on the runway, we’re aiming to be fit and healthy instead.

We’re realizing that exclusively looking to celebrities for body goals is unhealthy, especially as the focus is on the aesthetic value they hold, rather than their internal health.

That is, no one wants to look like Megan Fox because he or she envies her perfect health, but because he or she wants her bangin’ bod. The dark secret is, to quote Cher in "Clueless," many of these people are Monets: “From far away it's okay, but up close it’s a big old mess!”

While thigh gaps might look good in pictures, the reality is, it’s most likely achieved through poor diet and over-exercising. This is obviously not something we should aspire to.

Thankfully, in the age of Instagram and Pinterest, the diversity and realism lacking in magazines and film can now be found in abundance elsewhere.

If you scroll through any workout or #fitspo tags on Instagram, you will see bodies of all different shapes and colors -- bodies similar to your own.

Not only are their figures more representative of reality, but so are their stories and pictures.

It’s refreshing to see women who are actively engaged in good nutrition with insane abs and bulging biceps, red and puffy and gleaming with sweat.

They are not wearing makeup or expensive gym gear, but old baggy t-shirts and faded leggings. This indicates a movement away from the aesthetic value of exercise, where being healthy is more important than looking flawless.

Instagram and Pinterest also make it easy for us to engage, documenting our own fitness life and inspiring others in turn. We can curate goals that fit our individual tastes, and set up more realistic and attainable fitness challenges -- ones that can be supported by like-minded followers.

We’re embracing the shape we have and exercising not because we hate our bodies, but because we love them.

We’re realizing it’s more important to focus on what we put into our bodies instead of what we can deprive it, and that imposing strict rules and guilt will not shrink our frames, just our confidence.

Basically, we're learning positivity is a far more effective motivation than negativity. Out with thinspo, in with fitspo!

Best of all, not only are we dismantling existing beauty standards, but for once we’re not just replacing it with another unrealistic aesthetic.

Strength is a far more motivational goal than skinny, as it offers women, in particular, a means to protect and support themselves, rather than just an external improvement.

Typically, women have been discouraged from “overdoing” their workouts. Muscle is often considered too butch and unladylike, creating yet another unrealistic ideal for women to live up to.

But as Rashida Jones once put it, “You can’t invest in your looks as your only thing because it’s a depreciating asset. It’s like putting money into a stock that’s going down."

By abandoning the aesthetic focus, women can learn to be confident and happy, without consideration of their external physique. They won't feel they need to keep up with constantly changing and shallow ideals.

While there is little value in a hot body, there is an endless amount in being active and healthy.

Whether it’s moving furniture into her new apartment by herself, opening stiff jars or worst case scenario: protecting herself against attackers.

If a young woman is attacked, strength allows her to pull away, push them off, run away or take off her running shoes and use them to beat her attacker mercilessly.

That is more than enough motivation to work out as far as I’m concerned.

Skinny, however, can do little to protect you. Women should not only rely on a man to provide things we are capable of providing for ourselves.

Find your inner Furiosa, and be the kind of tough broad who doesn’t need rescuing or relies on others.

And if your newfound strength intimidates a man and your abs repulse him, you should scoop him up in your burly Hilary Swank arms, and rock him to sleep like the baby he is.

I’ve recently committed myself to another attempt at getting in shape, and this time I feel more motivated than before.

Confidence doesn’t come from looking hot in a bikini.

I want to have people take one look at me think, “that girl can take care of herself.”

Get strong, not skinny.