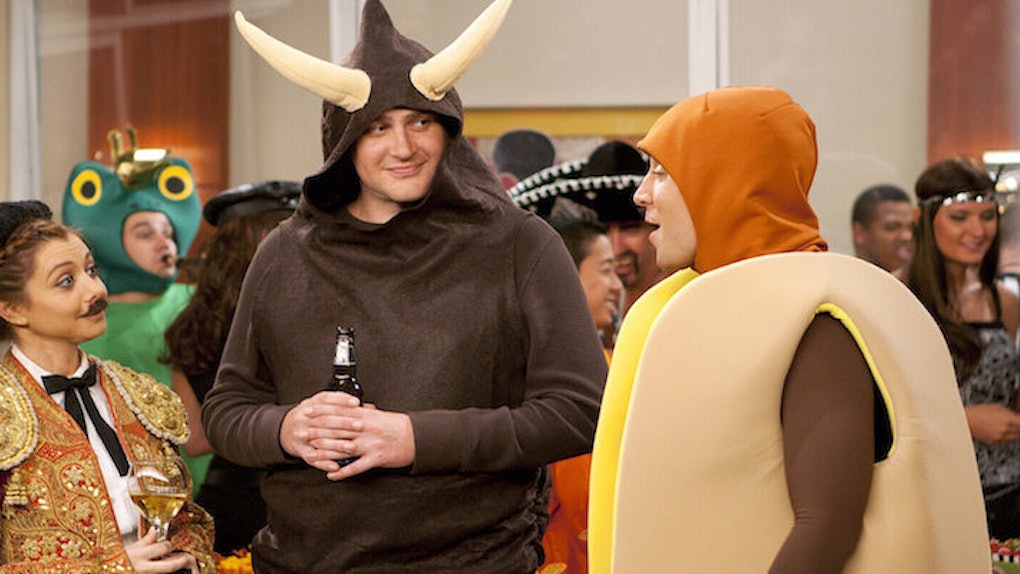 23 Reasons I Would Rather Be Funny Than Sexy On Halloween

I used to be a big fan of the sexy costumes.

I distinctly remember browsing the aisles of Spirit Costumes as a scrawny sixth grader and longing for the day that I could fit into one of the uber-sexy Leg Avenue costumes.

By eighth grade, I had finally managed to (barely) fill out an XXS sexy cop outfit, and I JUMPED on the opportunity. I was sexy and fly and unstoppable.

This theme continued well into my college years. I was a sexy cat, a sexy cheerleader and more. But all of this changed during my senior year of college, when I purchased a chicken suit.

My night in a chicken suit was, hands down, one of the best nights of my life. No, I did not get any action. No, nobody had a great view of my cleavage. But I had FUN.

I wasn't even that drunk. I was literally just riding the high of being a giant human-sized chicken for the night:

After that, I decided to put the sexy costumes behind me once and for all. I'm sure they really are for some people, but they're just honestly not for me. Why would I be a sexy firefighter when I could wear an inflatable sumo wrestler suit? (Spoiler alert: That's my costume for this year.)

The fact of the matter is that, for me, it just takes too much effort to be the girl in the sexy costume. Giving off that sexy air is f*cking exhausting. But slapping on a sumo suit and doing weird sh*t all night long is much more up my alley.

So here are 23 reasons why I will always champion the funny costume over the sexy costume when Halloween rolls around.

Anyone can be sexy. Sexy is a look. But funny? Funny comes from within. It takes confidence, skill and infinite swag.

The girl in the super sexy costume is intimidating. On the other hand, the funny costume is magnetic. People are drawn to you and your hilarious down-to-earth attitude.

3. You aren't trying to impress anyone with your funny costume.

You aren't trying to impress anyone with your Shrek suit. You are just cracking yourself the f*ck up.

4. You can have as many beers as you want without worrying about being bloated.

Odds are, your belly isn't showing in your deluxe sumo suit, so DRINK ON, SISTER!

5. Your attention shifts from the opposite sex.

Even if you didn't put on your sexy costume expecting to get a man, you will, at the very least, end up with a swarm of men desperately trying to chat you (read: your boobs) up. And then the night becomes all about juggling these men.

6. You're more likely to meet the man of your dreams -- and not some creepy, predatory weirdo -- if you're dressed in something f*cking weird.

Any guy who's actually going to make a move when you're dressed head-to-toe in a SpongeBob suit is the one who's going to love you for you.

Everyone else is irrelevant when you're in your funny costume. Forget the drama -- your costume alone has guaranteed you a night full of laughter.

When you dress as a sexy cop, odds are you will run into about 75 other Sexy Cops with the same exact Leg Avenue costume that night.

Odds of seeing someone in the exact same penguin suit as you? Not quite as high.

9. You are never competing against anyone else in your funny costume.

Because you're probably the only one wearing your costume, you never feel like you're in competition with a million other girls.

10. You don't have to stress about putting out a “sexy” vibe.

The vibe you are putting out is hilarious. And you don't even have to do anything but slap on your outfit to give it off.

11. You can reuse your funny costume.

Not a whole lot of occasions for you to reuse your sexy princess costume, but you can absolutely be a funky chicken for the next parade you attend... or maybe even next year.

12. A wardrobe malfunction will only make your costume better.

13. Your funny costume leaves a little (a lot) to the imagination.

I wonder what she's got under that sumo suit. ;)

14. Funny costumes automatically relieve you of any and all stress for the night.

They say laughter is the best cure for stress. Girlfriend, you are going to be LOLing all night.

15. You'll have a natural high from your hilarious costume before you even get to the pregame.

Being in a funny costume just puts you in an inherently FANTASTIC mood.

16. You already show up to the party with your inhibitions down when you're in a funny costume.

You already walked into the party ready for some f*cking WEIRD sh*t to go down.

17. Funny costumes are more fun for a better price.

Funny costumes are AFFORDABLE. And you have 10 times the fun for a tenth of the price.

18. Your funny costume gives you an automatic pass to give zero f*cks for the rest of the night.

I dare you to TRY to give a f*ck when you are dressed as George Costanza from "Seinfeld."

Because the word FUN isn't already in "sexy."

It takes a funny person to pull off a funny costume. And, as I'm sure you learned from Dr. Seuss long ago, being yourself is always a good thing.

Anyone can slap on a sexy firefighter costume and call it a night. But a full-body inflatable penis suit? That sh*t is no joke (well, okay, it's sort of a joke).

22. Funny costumes showcase more than just what you look like.

23. Sometimes being funny is the sexiest thing you can be.