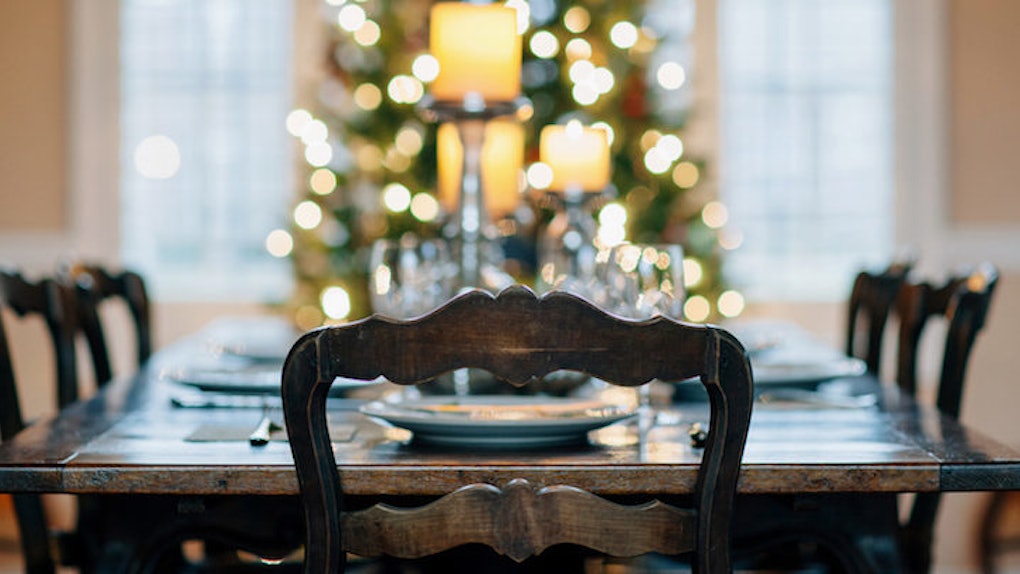 After losing my dad to cancer when I was 14, I became skilled in the art of festive fakery.

Over the years, I learned how to pull together a patchwork of holiday traditions, seasonal songs, old memories and food-filled celebrations to create a blanket of Christmas comfort that allowed me to navigate the season relatively unscathed.

But when I was 25, my mom was diagnosed with a terminal brain tumor.

She managed to stay with us long enough for one last Christmas together, but no amount of party food and prosecco could have made things normal that year.

In fact, since she left us to go be reunited with my dad somewhere up above, no amount of prosecco or party food (or mistletoe or mulled wine, for that matter) has been able to make any day quite the same, much less Christmas.

The past three Decembers, I've worked myself up into a frantic frenzy trying to plan a Christmas where I wouldn’t notice the gaping hole that’s been left in my family.

Maybe if I rented a cottage close to my old childhood home and made the same food my mom used to make and sang the same songs my dad used to sing, then I could recreate something that feels familiar.

Maybe if I flew to the other side of the world, to somewhere without so much as some token tinsel, I could somehow escape the fact it’s Christmas.

Maybe if I stayed in bed, binging on turkey sandwiches and working my way through Netflix, I could fool myself into thinking my mom and dad were having a post-Christmas dinner nap downstairs on the sofa.

But four years in, and I’m none the wiser.

So far, nothing I’ve tried has worked.

I still go to the parties, write the cards and wrap the presents, but deep down, it all feels so flat and so fake.

I tune out of social media, unable to face the photos of twinkling tree lights and happy families, jealous of the humble holiday brags as people update their statuses to let me know just how #blessed they are.

Over the past few years, Christmas has turned into something to be endured, not enjoyed.

Yet this December has come around, and so far, I’ve been fine.

That’s not to say I haven’t still been caught off guard.

I was shopping last week, and I picked up a top for my mom that I knew she would love, before quickly realizing she has no need for a new top, no matter how pretty she would look in it.

On Tuesday night, I caught myself scrolling through my phone to call my mom to tell her I’d just found the perfect present for grandma.

Just last weekend, I wiped the silent tears from my face.

I found myself — just for a split second — waiting for my dad to come home.

For a brief moment, I caught myself thinking, “Oh, I wonder when he’ll be home."

There was a hopeful lurch in my tummy and flutter of excitement in my heart that any minute, I was going to hear his car pull up outside, and he would come barging through the door saying, "Now, don't look in this bag, Ro. Santa might have something for you in there."

I’ve been okay so far this Christmas, not because I’ve worked out where to go or what to do so I don’t miss my mom and dad, but because I’ve accepted that I can only go forward and not backward.

I’ve finally started to loosen my painstakingly tight grip on the past.

I’ve finally started to accept that, despite all of the wishing, crying and longing, no moment can ever be brought back to life and relived.

I’ve known this all along.

After all, it was thinking about never being able to hug, talk to or laugh with my parents again that has caused so many of my meltdowns and ugly tears.

But recently, something has shifted.

Like a Secret Santa gift from grace, I have surrendered to knowing I can never again have what I once had.

I’ve stopped trying to fight what was.

I’ve stopped trying to resist what now is.

No matter where I go, what I cook or whom I’m with, it’s never going to be the same again, so the pressure is finally off.

I realized that by trying to recreate those idyllic family Christmases of years gone by, I’ve been giving myself an impossible task.

I’ve been chasing after something that was never there, so it could never be caught.

Am I ever going to stop wishing my mom and dad were here with me?

No, but I can't change what’s happened.

This year, I’ve realized Christmas is just about doing my best to enjoy what I can.

There should be no pressure, no comparison and no expectation.

Maybe I’ll still spend a little too much time waiting for the sound of their keys in the door, but I’ll also smile as I remember all of the times they did walk through that door.

Is it the same as it once was?

Can I still enjoy good times with good food and good company?

And for now, that's good enough for me.