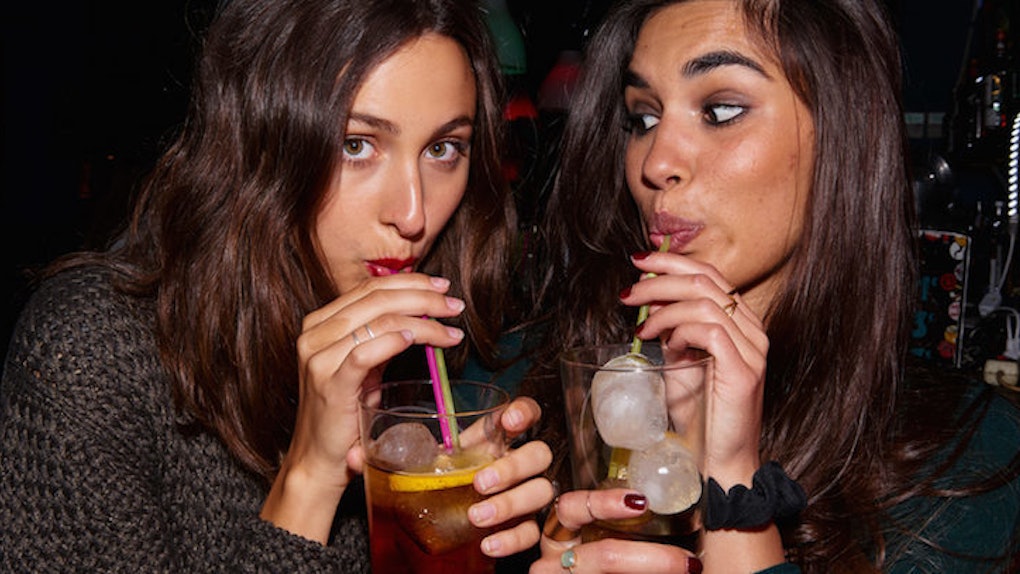 Every once in a while, I find myself dragged into what I consider to be the closest thing to hell on earth.

This unique hell disguises itself as "Girls' Night Out," and it usually involves us hitting "da clubz" in suffocatingly tight bodycon dresses and stilettos that will sprain our ankles when we're a few drinks deep.

What does hitting "da clubz" entail? It means doing everything short of sucking off some shady guy who says he's a promoter -- just so you can sit at his table and drink his bottle of sh*tty vodka cranberry while old, rich dudes and reality show has-beens try to convince you to grind with them.

Every single time this happens, I find myself wishing we had just gone to the bars. Clubs are hell; bars are heaven: We can wear what we want, drink what we want and hang out with people we like.

Here are just a few reasons out of a million why the bars are better than the clubs.

1. You can actually have a conversation.

It’s amazing how much you can hear without Alesso blasting in your ear.

Yes, this means kissing the free candy and mouthwash goodbye.

...but it also relieves you of the awkward guilt you feel when you don’t have cash to tip the poor lady for this completely absurd and unnecessary service.

3. Grinding is kept to a minimum.

Every once in a while, you will spot your token couple grinding at the bars, and it is f*cking awesome.

They're usually very blacked out, and they provide you and your friends with immense entertainment. You all agree that this is absurd and that middle school was many moons ago.

Grinding is commonplace in clubs. It's as though the entire room has suddenly forgotten that we are no longer 12 and can have real sex ... clothes off and everything!

4. You can drink what you want when you want.

You can’t order a pitcher of beer at the clubs. You're stuck with the sh*tty promoter vodka that arrives one bottle at a time ... unless you want to pay an exorbitant amount of money for anything other than the IPA you're actually craving.

A guy who likes to club is a douche. Simple as that. He’s not the guy who want to have a beer with his friends — he’s the guy who wants to drop $5k on a table with some top-shelf liquor so girls will see how rich he is and obviously go home with him.

There will obviously always be some douches at the bars. But not every guy there is a douche.

6. There is no hierarchy.

Bars have no VIP section for the richest and most beautiful people. Everyone at the bar is equal.

The guy you meet at the bars has to accomplish something epic: He has to make conversation with you.

If you two end up hitting it off, it’s because you’ve already connected on a level that goes beyond physical attraction.

As I mentioned before, you can’t have a conversation at the clubs. So even if you and the $5k-on-the-table douche really are meant to be, odds are you’re not going home with him because of his brilliant mind.

Mostly because the bars play actual music. Everyone can sing along to all sorts of feel-good classics ranging from “Sweet Caroline” to “Hey Ya.”

Who can sing along to “Levels”?

Go for a good happy hour at your neighborhood bar sans cover charge, and see how much money you save.

10. There’s no pressure to sell your body and soul to some seedy promoter.

What’s the best way to get out of paying a fortune for one night out at the clubs? Set the entire female population back a couple centuries by making yourself hot enough to get in with a promoter (otherwise known as the perviest men alive).

There's no such thing as a "bar promoter."

11. There is no desperation.

No waiting in line for thirty hours while some entitled bouncer decides if you're pretty enough to get in.

12. You can wear whatever the f*ck you want.

If you want to wear your tight bodycon dress and stilettos to the bars, go for it. There will be enough people there pre- and post-clubbing to make you look normal.

But you can also wear something actually comfortable (like, idk, jeans) without feeling like a total idiot.

13. Your night doesn’t start at midnight.

Bars and clubs close at the same time. The difference is in when you can show up. Nobody is at the clubs before midnight. You can be at a bar as early as four in the afternoon.

Clubbing doesn't just blow for anyone with semi-normal sleeping habits. It also significantly cuts down on the amount of time you have to actually be out having fun.

Half of the people you come across at the clubs are cute little 18-year-old girls the club promoter snuck in.

15. The bartender is less douchey.

The bartender here doesn't think mastering the art of the "Lavendar Fizz" makes him God's gift to the earth. WTF even is that?!

Girls don’t have to dress in degrading outfits, and guys can get in without paying a ridiculously expensive guys-only cover charge.

17. You don’t have to pretend to care about some random D-List reality star.

I don’t care about Traci Bringham, and I’m pretty certain nobody has given a sh*t about her since season two of The Surreal Life. But suddenly she's Rihanna when she walks into a club.

If Traci Bringham walked into a bar, nobody would give a sh*t. MAYBE the bartender would treat her to a free beer.

If you want to go in with your friend, you can.

19. You can have a decent time at the bars even if you’re not completely f*cked up.

Going sober to the bars is by no means ideal, but it doesn’t completely suck. You can enjoy some sliders while you hang out with your friends.

Soberly standing in your bodycon dress and stilettos as the dubstep version of “Cheerleader” blasts in your ear (for what can only be the thirtieth time that night) is the only thing worse than doing it while drunk.

20. You can sit down without spending a grand.

Where can you sit at bars? Anywhere you want … without charge!