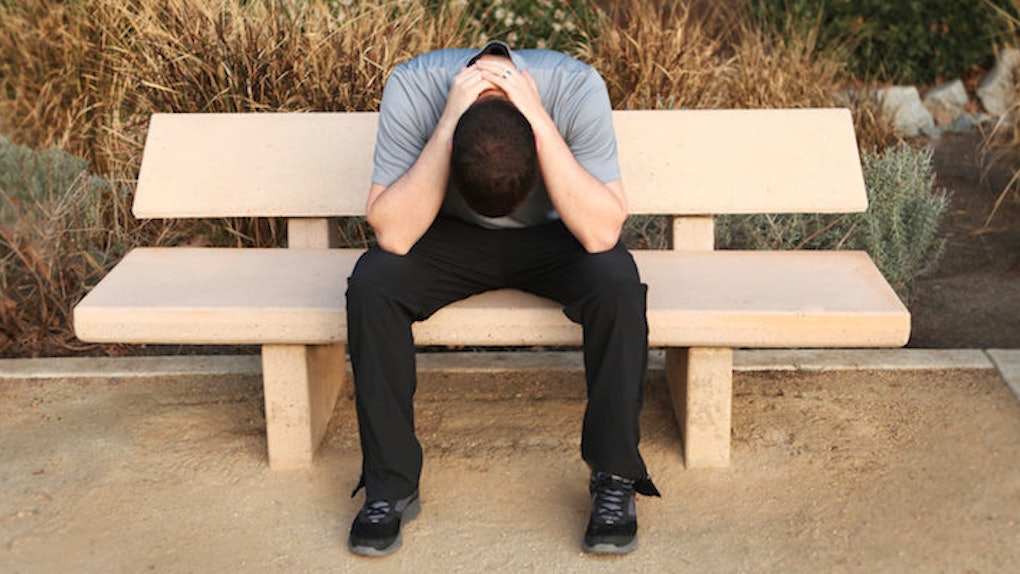 I used to wear gloves in class. But I wasn’t making any bold statement of self-expression. My hands were just cold.

The gloves made it difficult to hold a pencil, which didn’t help my already sh*tty handwriting. But they kept me from needing to shove my hands between my thighs every five seconds to keep the blood flowing.

I also wore my winter coat for an entire two-hour seminar, which made shifting in my chair sound like a canvas tent flapping in the wind.

Still, maybe I was just naturally cold-blooded. There was no need for concern.

Later that year, I attended a Relay For Life event in our school's gym. It was an all-night walkathon around Boston College’s indoor track to raise money for cancer. Constant indoor exercise? Sign me up.

Little did I know that the perimeter of the track would feature booths laden with Italian cuisine: pizza, baked ziti, meatballs, shrimp scampi and more pasta. The night flew by in a blur of red and white sauces, and by 2 am, I felt clinically ill.

At 2:10 am I gave up on charity (sorry), and waddled back to my dorm. I opened the bathroom stall and attempted to reverse the events of the night, but to no success. I sulked back to my room, crawled into my bed and passed out.

The next morning, I limped into the hall bathroom, shirtless, and took the biggest dump of my 18-year-old life. I washed my hands and began to brush my teeth. But when I looked in the mirror, something -- two things -- were horribly wrong.

The whites of my eyes were red. Not I-slept-in-my-contacts red, but blood-red. It looked like my pupils were floating in marinara sauce.

I examined the red splotches in my eyes in the mirror with slight horror, but mostly fear -- fear of having to explain to my dorm mates what the f*ck had happened last night.

Then, Kyle entered the bathroom.

How had he not said anything? No follow up questions. No "Are you going to the doctor?" Nothing.

For almost a year, he -- along with 30 other freshman dudes -- had seen my dangling, slender arms and the hollowness of my cheekbones. They had seen every muscle shift under my skin as I brushed my teeth, and once or twice, they had caught me probing my stomach in front of the communal mirror. Now, they had seen blood-filled eyes from trying to make myself vomit the night before. But they still hadn’t said anything.

It quickly spread around the dorm that I looked like a malnourished terminator. Yet, no one seemed to care.

Did it ever occur to anyone that maybe I was a heterosexual male coping with the stress of college and fear of the freshmen 15 by developing an eating disorder? No, it didn’t.

And it was because I’m a guy.

My eating disorder started with small things, like not eating the entire bun of my chicken sandwich. I always felt better knowing I’d thrown something away. Every morning, as my roommate would leave to eat breakfast in the dining hall, I’d stay in the room to eat one cup of Kashi GOLEAN cereal with exactly one cup of milk and one banana. 160 calories + 90 calories + 100 calories = 350 calories. I opened my Excel spreadsheet, entered the sum and monitored my calories throughout the day.

Over the year in 2012, my daily caloric intake dropped from 1,950 to 1,700. Sometimes, I ended the day with just over 1,500. Now that was a good day. Soon, I found myself chewing through packs of gum to simulate the sensation of eating and filling myself with so much water that it started disrupting my sleep.

Dudes have no idea what to do if they suspect a friend is facilitating his self-destruction via Microsoft Office tools because most men can’t relate to these problems. Eating disorders don’t exactly fit within the cult of masculinity. To most people, they're more of a girl problem.

When I finally mustered up the courage to tell one of my male friends about my eating disorder, I swear to God, he said, “You don’t eat? Why not? Are you picky? Are you, like, a picky eater? I mean, the food here sucks. I’m with you there, dude.”

Now, I’m usually the last to wave the social justice flag over gender binaries because they’re a bit overplayed. But in this case, they’re not brought up enough. The skinny man might be more than just a skinny man. He might need some f*cking help.

The only help I received during my freshman year was from a girl named Erin, a friend of a friend who had enough female intuition to sense something was wrong. She used to grab lunch with some of my classmates before our two-hour seminar. When I joined them six weeks into the year, she noticed my sparse eating habits and many layers of clothing. Around November, she sent me a text -- just a text -- to ask how I was. A few texts later, she came over. I ended up telling her.

I cried and felt so ashamed, but at least someone had recognized me. All of me.

Women like Erin grow up in a world saturated with body image issues, and are given various means to combat them. Men generally do not. When it comes to eating disorders, there is no such thing as male solidarity.

I had no idea what to do to help myself, but I thank the patriarchy that Erin knew -- or, at least, acknowledged -- that I needed help. That was enough.

Men with eating disorders are uncomfortable anomalies within the realm of a traditionally female problem. We're supposed to die of heart attacks from eating too much red meat, and women are supposed to wither away in pursuit of an impossible ideal.

If I wanted to have a logical problem people could easily understand, I should have piled on slabs of muscle through rampant steroid use. At least then I would have fit in a little more neatly into the societal construct of male body issues.

If a guy has an eating disorder, it’s not sad because it’s not normal. It’s just weird. It’s strange and disturbing, like a Sarah McLachlan commercial: You should feel pity when you watch them, but all you really want to do is change the channel. Much like seeing a very thin man, the sight of those dogs opens up a portal into a new world of suffering that everyone would rather keep closed. It’s inconvenient. People think, “Ugh, I have to worry about this now? No thanks.”

The only true advice I can give someone suffering through this problem is to fight that desire to isolate yourself for fear of being judged. Actively reach out to possible sources of help: friends, parents, doctors or even a stranger on a bus (as long as they're female).

Destroying yourself, by yourself, is one thing. But surrounding yourself with people who actually care about you prevents you -- forbids you -- from writing yourself off as worthless. When I welcomed another person into my struggle, I realized I was worth saving. “This person is paying attention to me,” I thought. “So I must have some redemptive qualities.”

Which I totally do. I’m great.

As fellow eating disorder survivors know, it’ll never truly just go away. I still get stressed about not exercising or unintentionally putting myself in a situation where I’m forced to eat pizza. I still constantly lift up my shirt in front of the mirror just to make sure all the lines are in the right places. I doubt it will ever really be over. But now, the good days outnumber the bad. I may be doing fine now, but my story is just one of many.

I hope someone in your life makes a little more sense now.