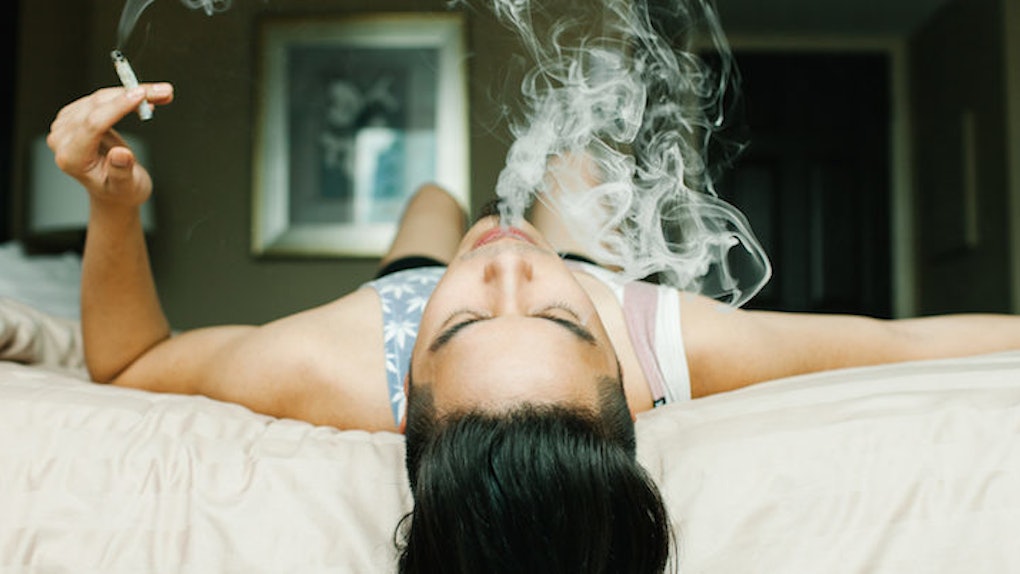 There's A Big Difference Between Sleeping High And Sleeping Drunk

One of the worst aspects of growing older is sleep becomes an increasingly elusive entity. Not only do you have less time to sleep, it also becomes harder to fall asleep when you actually need/want to.

So, instead of blissfully falling into dream land, you find yourself binge-watching Netflix until you pass out with the TV still on, only to wake up several hours later wondering where it all went wrong.

A lot of people try to compensate for this vicious cycle by having a little nightcap -- drinking a glass of wine or a nice stiff whiskey to help them doze off.

Others turn to marijuana as a sleep aid because it's known to help people relax. As the comedian Katt Williams once said, "That's the side effects [of marijuana]: hungry, happy, sleepy."

It's no secret that both alcohol and marijuana induce sleep, but that doesn't necessarily mean they're good for you or your sleep cycle.

This leads to the question: What are the differences between sleeping on alcohol and weed?

Research shows that having a nightcap is terrible for your sleep.

In a recent study published in the journal of Alcoholism: Clinical and Experimental Research, researchers at the University of Melbourne found that college students who drank before slumber exhibited disrupted sleep.

The researchers examined and recorded the brainwaves of 24 students as they slept, having them drink alcohol on some nights and a placebo on others.

Overall, they found when the students drank alcohol, it increased slow wave sleep patterns and delta activity, which Time describes as the process associated with restorative deeper sleep. This explains why having a drink before bed helps you drift off quickly.

At the same time, however, drinking before sleep also increased alpha activity, which occurs when you're awake (and the brain is awake), but in a more restive state.

When delta and alpha activity occur at the same time, sleep patterns are disrupted because it's as if the brain is simultaneously attempting to rejuvenate itself via deep sleep while also experiencing activity that occurs while it's awake.

In essence, drinking alcohol leads to contradictory activity in the brain.

In an interview with Huffington Post, Christian Nichols, one of the co-authors of the study, stated:

Similar increases in alpha-delta activity, which are associated with poor or unrefreshing sleep and daytime function, have been observed in individuals with chronic pain conditions Thus, if sleep is being disrupted regularly by pre-sleep alcohol consumption, particularly over long periods of time, this could have significant detrimental effects on daytime wellbeing and neurocognitive function such as learning and memory processes. The take-home message here is that alcohol is not actually a particularly good sleep aid even though it may seem like it helps you get to sleep quicker... In fact, the quality of the sleep you get is significantly altered and disrupted.

Moreover, studies in the past have linked concurrent alpha-delta patterns during sleep with drowsiness, irritability, headaches and generally feeling unrested, as noted by Time. This doesn't sound too far off from the symptoms of a hangover.

The bottom-line: Alcohol isn't good for sleep, so you might want to avoid making nightcaps a habit.

People are dazed and confused about pot's impact on sleep.

Marijuana is illegal by federal law, but the movement for legalization has gained a great deal of momentum in recent years. Four states and Washington DC have legalized recreational use, while 23 states (and DC) have medical marijuana programs.

But there's still a great deal of debate over the medicinal benefits of marijuana, even though it clearly has some beneficial properties. Not long ago, the US Surgeon General, Vivek Murthy, acknowledged this, stating:

We have some preliminary data that for certain medical conditions and symptoms, that marijuana can be helpful.

Other prominent figures in the medical community, such as Dr. Sanjay Gupta, have also come forth and celebrated the medical properties of marijuana, calling for outright legalization:

Not to mention, unlike alcohol, it's impossible to overdose on weed. This is precisely why numerous individuals, including President Obama, have argued that alcohol is more dangerous than pot.

But even though it has evident medicinal benefits and isn't as bad as alcohol, is pot useful as a sleep aid or in combatting insomnia?

The broad answer is: It's not so clear. Due to the fact that marijuana is still illegal by federal law, it's difficult for comprehensive research to be done in regards to its overall effects, particularly on sleep.

Anyone who's ever dabbled with marijuana has likely experienced the drowsy sensation it produces, which might lead people to conclude pot is the perfect sleeping aid.

But a 2014 study from the University of Pennsylvania has suggested that marijuana is actually linked with insomnia.

Yet, as the Daily Beast noted last June, this notion is still inconclusive.

In other words, there may be a correlation between marijuana use and insomnia in the sense that people are attempting to use pot as a sleep aid, or anti-insomnia medicine. But there is no clear evidence that marijuana causes insomnia.

Dr. Michael Grandner, the senior author of the University of Pennsylvania study, stated:

As more people have access, it will be important to understand the implications of marijuana use on public health, as its impact on sleep in the 'real world' is not well known.

We don't know what the long-term effects of smoking weed before sleep truly are, so it's still an open question.

There is evidence weed suppresses REM sleep, the last phase of sleep in which most dreaming occurs, as highlighted by Vice.

In this sense, weed might inhibit your brain's ability to process your experiences and make plans for the future, which is what dreams are in many ways.

This is why chronic pot users might wake up feeling disoriented, which impacts their overall day and ability to function. While that result obviously isn't ideal, it still doesn't prove weed disrupts sleep in the same way alcohol does.

But if you're a stoner and, while reading this, suddenly realized you haven't been dreaming as much recently, now you know why.

It might be fair to argue that sleeping on marijuana isn't as bad for you as alcohol, or even other medications, but the fact of the matter is we should all avoid using any substances to aid in sleep, whether it's booze, weed or sleeping pills.

Research shows the best way to combat insomnia is through cognitive and behavioral therapy combined with changing certain habits: Set a specific schedule for sleeping, only use the bedroom for the two S-words (sleep and sex) and don't eat or exercise right before bed, among other things.

If you are going to continue using substances before bed, at least attempt to avoid becoming reliant on them. Everything in moderation, my friends.

Citations: More Evidence Alcohol Before Bed Is Ruining Your Sleep (Huffington Post), This is What Alcohol Does to Your Sleep (Time), The Acute Effects of Alcohol on Sleep Electroencephalogram Power Spectra in Late Adolescence (Alcoholism Clinical and Experimental Research), No Pot Doesnt Cause Sleeplessness (The Daily Beast), Cannabis and Sleep (Psychology Today), Dr Sanjay Gupta Its time for a medical marijuana revolution (CNN), US Surgeon General Vivek Murthy Says Marijuana Can Be Helpful For Some Medical Conditions (Huffington Post), President Obama Pot not worse than alcohol (Politico), Insomnia (NHS), Why Your Dreams Are Suddenly So Intense After You Stop Smoking Weed (Vice News)