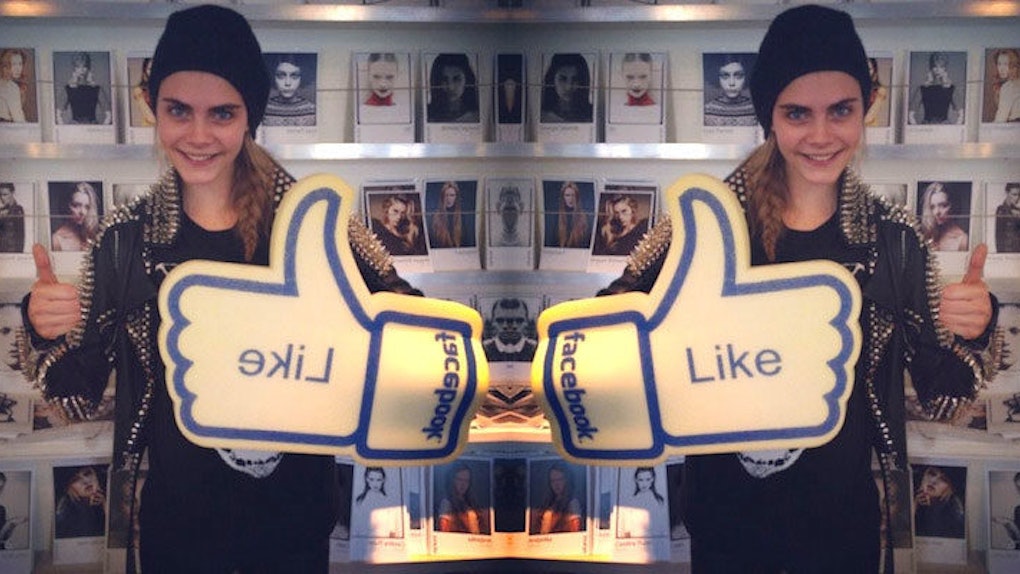 Anti-Social Media: Can We Talk About The Passive-Aggressive 'Like'?

This morning, I told my coworkers a tall tale of the time I "liked" this funny video that some girl posted onto my ex-boyfriend's Facebook wall while we were dating.

I'd never met the girl before. We didn't know each other at all, so my engagement with something she posted onto his page was random at best and creepy at worst.

And my boyfriend totally called me out on it, the bastard. He saw right beneath my damn like. He said, with a laugh, that I only liked the video to stake my claim on him, to mark my territory.

I shrugged. I couldn't contest his allegation.

I may not have known this girl, but I knew the two of them ran in the same social circle, and she was already slightly on my radar (I'd later see her as a threat to my relationship, but that's a whole other story.).

And if I was being honest with myself, I found the video funny, but not funny enough to go out of my way to like it, especially if it was posted by a stranger.

Everyone erupted in sympathy. I don't think I was a particularly jealous girlfriend, but I definitely wasn't above overanalyzing comments on social media and feeling the urge to respond to them.

And, honestly, neither is anyone else, since it turns out I'm not the only person who's employed the passive-aggressive like. Many of my coworkers had anecdotes of their own to share.

In describing her experience with it, Zara told me she liked an Instagram picture of flowers her ex sent another girl on Valentine's Day "to show this new girl that I'm not f*cking going anywhere," she said. "It scared her, as it should."

Gigi showed me a picture of her and her boyfriend, which a random girl had found and made a comment complimenting his beard.

She decided to passive-aggressively like both the compliment and her boyfriend's "Haha thanks!" in response. When I asked her if she knew the girl, she gave me a fervent "No."

"She works at some place where my boyfriend is a consultant, and I saw this comment, and he STUPIDLY said he thinks she has a crush on him."

The anatomy of a passive-aggressive like is complicated. It can be used when you want to show someone who's boss, to be ironic, to spite someone, to mark your territory -- to basically say you don't approve of whatever's going on without actually saying you don't approve.

It replaces a real response, saving you a lot of public embarrassment that might have otherwise happened had you not kept your mouth shut.

Sometimes, a passive-aggressive like can take the form of a "like by omission," as Kaitlyn, who recalled a time when she once pointedly liked every comment in a conversation except one, said.

Whether or not the passive-aggressive like is truly effective depends on how other people interpret it and your purpose for doing it.

What if someone takes your passive-aggressive like as a genuine like, and then your whole plan to come off as a bitch is foiled by the other person misinterpreting your intention to be a bitch?

I think it depends on whether or not there's already an established context between you and that person.

If it's known the two of you don't like each other that much, a like on either part would immediately be seen as having a negative connotation, since there is little to no positive connotation in which it could be perceived.

"Certain likes might be very obvious to the person who would receive it, and that's effective enough," said Gigi.

But if there's no known relationship between you and that person, and you've liked something he or she posted in order to send a message to someone else, that might be where the passive-aggression gets lost.

Unless, of course, the person to whom you want to send the message catches you, like my ex-boyfriend did.

Overall, though, even if it wasn't effective, "it wouldn't have mattered," Gigi added. "You wouldn't ever regret liking it because nobody would have known" whether or not it's actually passive-aggressive. Then, it would just be seen as a like.

The like could also just be for your own satisfaction.

"It feels really good, that click," Zara said, making a dramatic pointing motion with her finger to illustrate her point. "We're so clicky anyway, so just to click that like, it's like a 'f*ck you.'"

"It's the slow like," Kaitlyn said, mimicking the motion.

"You indulge in it," added Zara.

"And then you pull it back in," Kaitlyn said, reeling in her finger and blowing on it like a smoking gun.

John, a male coworker, said he thinks you'll never actually know how effective it is unless the person whose comment or picture you liked notices it and contacts you about it directly.

"Or, if there is an endless cycle of passive-aggressive likes."