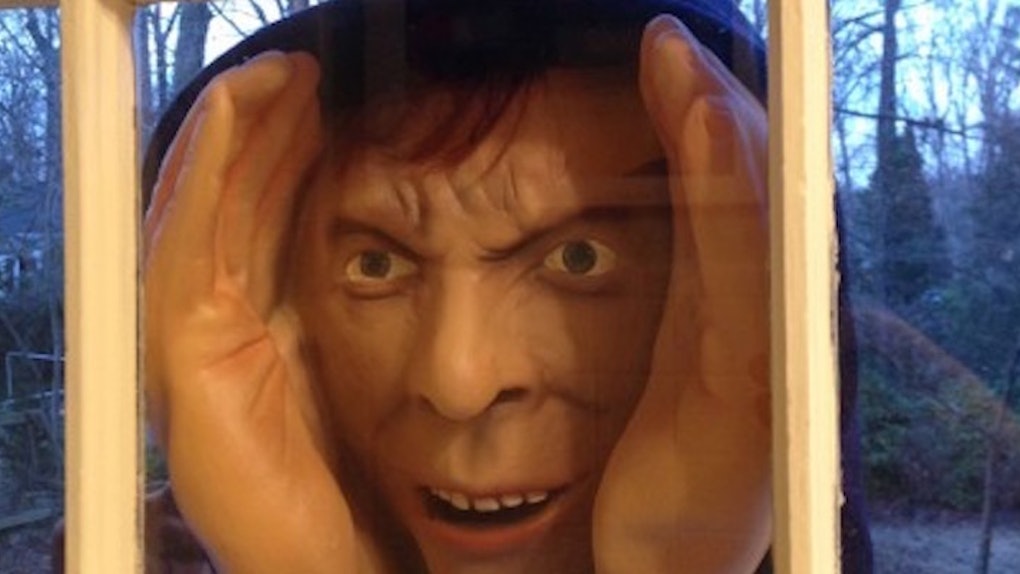 Oh Halloween, what a sweet, innocently scary holiday specifically designed for children to live their best lives, twirling around in sequined ballerina costumes and having white sheets thrown over their little ghostly heads.

Of course, you quickly get to adulthood and Halloween goes from being full of ~childlike~ wonder to the ~sexiest~ day of the year. I personally have been rocking a provocative Snow White costume for four consecutive years, and I don't plan on retiring my scandalous velvet Disney attire anytime soon, babe.

My Snow White costume embodies what Halloween is supposed to be: Sexy and fantastical, with just the right amount of goth energy tossed into the mix.

While I find myself turned on by the spooky, chic and provocative nature of adult Halloween, I'm not into rapey Halloween decorations, like this decoration called the "Scary Peeper Creeper," which was recently being sold at Home Depot.

Not only is this a delightful example of rape culture sneaking its way into my beloved Halloween, but it's also classless and terrifying.

This handsome (if you don't know I'm kidding, I'm worried for you) decoration attaches to the outside of your window via suction cups to simulate a predatory creep peeking into your house.

According to Metro News, Home Depot (which is usually a safe place, and even a second home for us lesbians) was sweetly advertising the product as a way to play funny pranks on "friends and family during Halloween, or any other time of year!"

Oh, fun. So not only do I have to be triggered by seeing a deranged-looking man in a mask appearing to watch me change on Halloween, but if I'm a really lucky girl, I'll get that privilege on Christmas and New Year's Eve, too!

Have I told you how much of a fucking blast it is to be a woman in a world where a disturbing decoration of a creepy man (who looks like he just escaped Rikers Island) staring at you through your bedroom window is just considered a silly prank? It's just a real hootenanny for us girls.

The company that makes these "Scary Peeper" masks even has a video that shows Peeper Creeper scaring a poor woman as she enters her bedroom. The woman opens her curtains, and OH, SURPRISE, there is a good ole' "Peeper Creeper" staring at her with his static, blink-less, bizarrely realistic eyes.

"But Peeper Creepers are all in good fun, Zara! I thought you learned that when you found out older boys had been watching you and your fellow sixth grade girls change through a peephole in the gym locker room."

Well, I must have forgotten. Thank you for reminding me that peeping Toms are just something I have to deal with as a girl, and I should be used to them by now. In fact, I should be grateful to Peeper Creeper. He probably could have prepared me for the time I saw a man on my fire escape watching me sleep last winter.

Seriously, I've had enough of our society normalizing sexual predators invading our personal space and staring at us when we think we're in private. I'm tired of being objectified by real men, let alone a freaking Halloween decoration.

And thank goodness I'm not alone. Other women have already complained to Home Depot about Peeper Creeper for its madly triggering, traumatic and immoral taste. And now, the retailer says it's taking "immediate action" and is working on removing the product from its shelves.

Now, if only we could simply remove the real Peeper Creepers terrorizing women IRL from the WORLD, then that would be great, thanks.