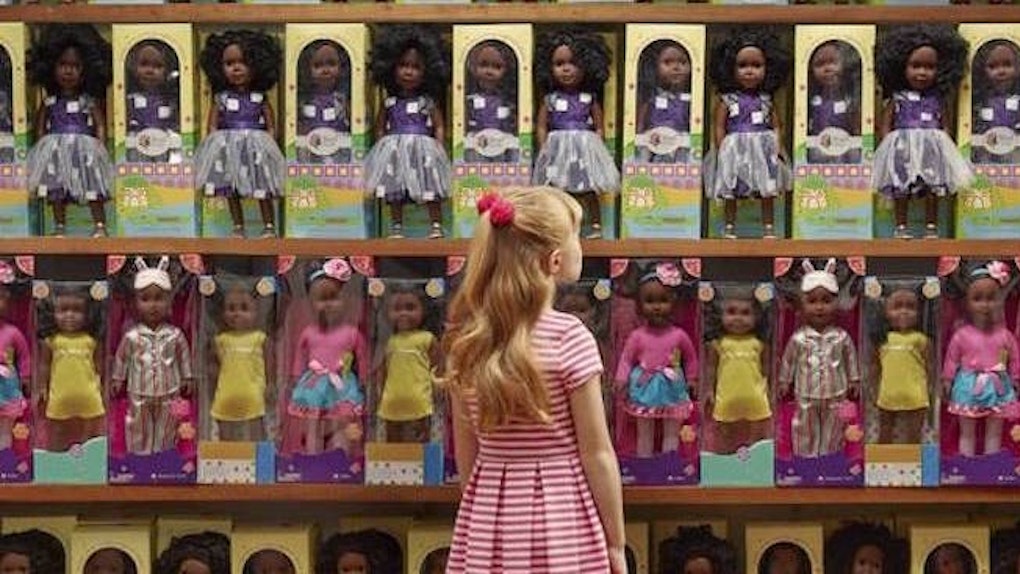 Chris Buck Flips The Script On Race And Power Dynamics

The brief yet vibrant shots, which were part of the May 2017 race issue, feature three scenes that seem to flip the script on power dynamics, representation and even stereotypes.

One photo is of a white female child standing in front of an aisle full of only black dolls.

One might never think a simple trip to the toy store has anything to do with race, but alas, representation matters even when it comes to the dolls little girls get to play with.

In this photo, the child's feelings about not having a doll that represents her aren't reflected, but the lack of access in the moment is obvious.

Another photo depicts a group of Asian women getting pedicures from white women.

Nail salons are most often operated by women of Asian decent (defined as "of, relating to, or characteristic of the continent of Asia or its people" by Webster). Some work under harsh conditions, including low pay and harsh chemicals in their work supplies.

The photo switches the expected nail salon scene, placing the Asian women in the seat of the relaxed and pampered.

The third photo shows a Latina woman getting getting a beverage poured into her cup by a white maid.

Like the photo before it, this shot switches the economic power dynamics, placing a Latina woman in a position of affluence with signifiers like her clothing, cell phone, home décor and even her dog (à la Paris Hilton.)

In actuality, Hispanic women make up 41 percent of workers in the housekeeping field, according to the United States Department of Labor.

Women of color are also often depicted as domestic workers in television and film.

There's The Help starring Viola Davis and Octavia Spencer (2011). Maid In Manhattan stars Latina actress Jennifer Lopez (2002). Then there are characters like "Florence Johnston" from the '70s and '80s show, The Jeffersons, and "Mammy" played by Hattie McDaniel in the 1939 classic, Gone With The Wind.

Photos like this turn the tables around and for some, might even inspire questions about why certain labor roles are dominated by women of color.

Chris Buck says he was glad to do the series for the magazine and wanted to shoot it carefully.

I recognize it's a real responsibility as a white photographer to make images very carefully and do so in a way that is thoughtful and respectful. I am not of color. It wasn't something that I was uncomfortable with at all. I feel as a prominent photographer in this country, it's important for me to address these topics. I was actually surprised when I moved here how little talk of race there was. It's been happening for a long time. Who are we kidding? My grandchildren will be talking about this still.

Buck is also very clear on what he wants his position in conversations about race to be:

Talking with my friends who are of color, hearing them tell their stories and their experiences is also something that came to mind when this story came to me from the Oprah people. Even though the pictures are about a dialogue, I know as a white person I should do more listening than talking.

True to its name, "Let's Talk About Race," definitely has the people talking online.

Twitter users have already been sharing their thoughts on the series.

The spread has also gotten a bit of backlash:

I do think it's important for people to express how they feel about these images. Some people are more upset about the photos and that's fine. I get that it's uncomfortable for people of color and for white folks. And that's fine but the conversation still needs to happen.