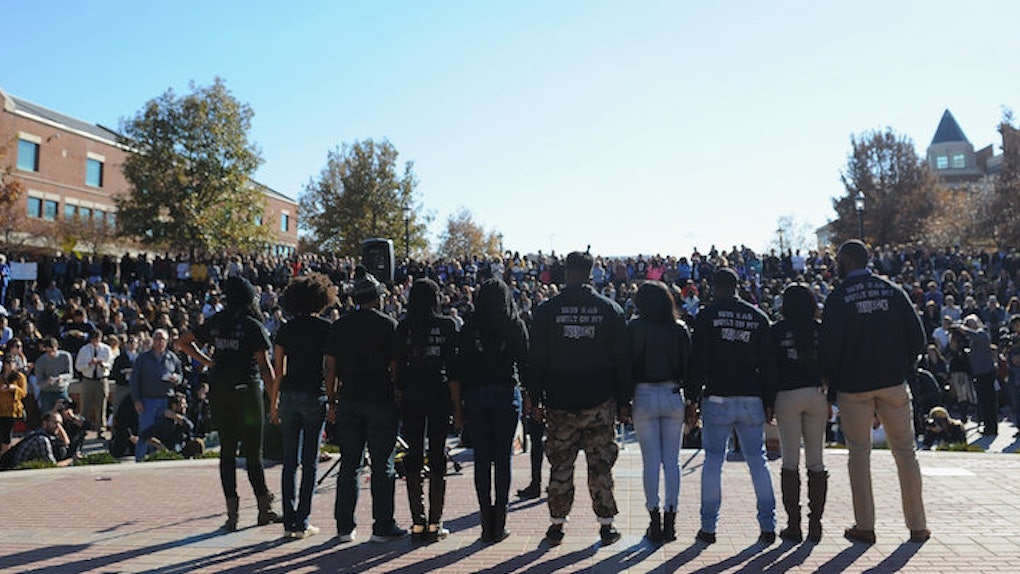 How Mizzou's Lack Of Action Led To An Administrative Failure

On Monday morning, Tim Wolfe, former President of the University of Missouri System, announced his resignation from his position effective immediately.

The community, named one of the best college towns in the nation just two years ago, had been pushing for weeks for his resignation over his failure to address several incidences of blatant and threatening racism on campus.

According to the Washington Post, Chancellor R. Bowen Loftin is also scheduled to step down into a lesser role on campus.

This is a big deal.

It’s not every day that the president of a university is essentially impeached by its students and faculty.

Well, beyond the history of racial strife at the university and the 2014 uprisings in Ferguson, Missouri, just two hours east of Columbia, a series of racist and bigoted events on campus and insufficient administrative response inspired students to take action.

Faculty members were motivated by their own frustrations with University of Missouri administrators, citing issues regarding cutbacks, health insurance, relations with Planned Parenthood and tuition waivers for graduate students serving as teachers and research assistants.

This semester alone, notable incidences included the university’s student body president Payton Head being called the N-word by students passing him in a pickup truck, a black students’ performance rehearsal interrupted by a derogatory racial slur and most recently, the drawing of a swastika on a dormitory wall with human feces.

The school’s response included mandatory diversity training and another remorseful message from administrators, begging, “Let's stop this. Let's end hatred and racism at Mizzou. We're part of the same family. You don't hate your family.”

Thank you, Chancellor Loftin, for that constructive and revolutionary response.

At the forefront of this uprising is a student activist group called Concerned Student 1950, whose name recognizes the year Missouri first admitted black students, and Wolfe’s resignation was only one of the group's demands.

Among other demands was a handwritten apology from Wolfe read publicly to Missouri students, where he must “acknowledge his white male privilege, recognize that systems of oppression exist and provide a verbal commitment to fulfilling Concerned Student 1­9­5­0 demands.”

Others included the creation of a “comprehensive racial awareness and inclusion curriculum throughout all campus departments and units, mandatory for all students, faculty, staff and administration,” to be “vetted, maintained, and overseen by a board comprised of students, staff and faculty of color,” as well as increasing the percentage of black students and faculty to 10 percent.

While Wolfe and his cohorts did not address Concerned Student 1950’s demands for three and a half weeks, the student body had time, human capital and the commitment to force the university to respond with the only tool they knew would work: attracting the national media.

Faculty members staged a walkout, refusing to teach classes. Lastly, the university’s varsity football team announced a boycott on Saturday, November 7, standing in solidarity with the efforts of student protesters.

In a rare display of modern student-athlete activism, the economic value of the Mizzou Tigers football team forced Wolfe to respond to the students’ demands.

The University stood to lose an estimated $1 million if the Tigers did not return to play for their game against Brigham Young University next Saturday.

The events and sentiments in Columbia this semester have mirrored many of other college towns.

Academic institutions have proven to be frustratingly slow in responding to the needs of minority students, especially in the face of blatant aggressions by peers.

In some cases, the inaction and passivity of these administrations has contributed to and allowed the continued struggle of the minority college experience.

Recent incidences at Duke and media coverage of dissatisfied students at Yale show the grievances of those at Mizzou are shared across the country.

The experiences of silenced, yet distressed minority students on college campuses are reaching a tipping point, where reactionary administrative decision-making is grossly inadequate.

This forces us to ask ourselves these fundamental questions: What do I expect from my university? If my university is not meeting my expectations, what changes must occur?

This is a post from The Rival at Duke University.

The Rival is a brand new digital publication that is changing the way college campuses write, read, and think about student news and entertainment. See more at duke.therival.news.