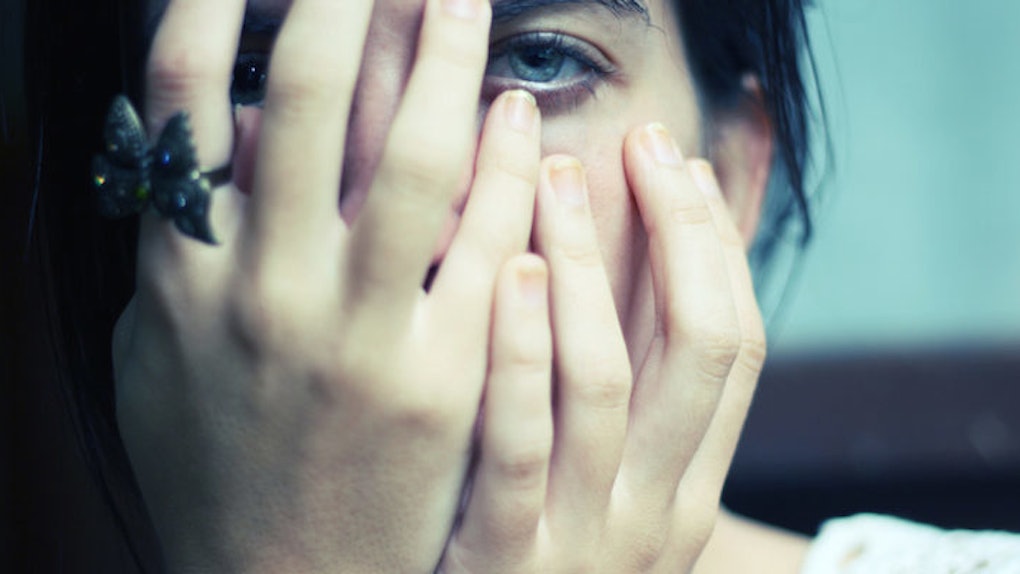 How My Struggle With Childhood Bulimia Followed Me Into Adulthood

When we hear the phrase “mental illness,” the first things we think of are depression, anxiety and bipolar disorder.

While these are all very valid and real examples of mental illness, eating disorders sometimes get forgotten.

This is kind of crazy because according to The National Association of Anorexia Nervosa and Associated Disorders, eating disorders (or ED for short) actually have the highest death rate of any mental illness.

I grew up in a family in which a number of us had mental illness, but nobody would ever talk about it.

When I say “my crazy family,” I really mean it.

Just out of respect for them, I won’t go into details about who had which ones. But I am here to share my story.

Because my family is unaffectionate (we didn’t even start saying “I love you” until a few years ago), we are also private people.

So when somebody’s different, it’s all very hush-hush.

If I had known back then that mental disorders aren’t something to be ashamed about, I wouldn’t have hidden mine for so long.

Maybe then, my family wouldn’t have reacted so poorly.

In the sixth grade, I began battling with bulimia nervosa.

I was 11 years old. Ironically enough, a video I saw in sex ed taught me about it. The video tried to show me it was wrong, but instead, I connected it with things I saw in the media and television.

I thought to myself, “Hey, maybe this could work.”

I first started being bullied when I was 6. It was by the people closest to me: family, friends, people at church. I was told I was ugly and fat. I wanted those words to stop.

So I took matters into my own hands.

I would stop eating at school because who wants to be caught throwing up in a school bathroom? I started to wait until I got home to eat, so I could throw up in the shower.

After a few months, I still didn’t see a difference. I began searching online for tips.

What was going to make me lose weight?

I got caught a year later, by my older sister. She gave me a talk about how stupid I was. She told me it wasn’t even working, so I should stop.

I looked in the mirror and still saw this fat, ugly girl, and decided she was right. It wasn’t working.

But that was because I wasn’t being dedicated enough.

I wouldn’t throw up, sometimes. I wasn’t really bulimic. I was just throwing up what I ate so I didn’t gain weight.

By the eighth grade, I had taught myself to purge on command. I didn’t even need to stick my finger down my throat anymore. I could just go directly to the bathroom after a meal and be done with it.

It had to be one of the hardest years of my life. The summer before, I had learned I was moving and changing schools, away from the school I had been in since kindergarten.

I was failing almost every class, and I didn’t even know if I would get to high school.

On top of that, after every binge and purge session, I would sit at the bottom of my toilet, crying for hours.

I didn’t want to feel this way anymore. I needed to stop.

So I did, but only for a year.

In my sophomore year of high school, I had one of the biggest relapses of my life.

My best friend at the time also had an ED, and encouraged me it would be worth it in the end.

She said guys would like us if we were skinny, and we weren’t getting any attention because we were fat.

I was also actively using Tumblr, which glamorized all mental illnesses because they made you “different.” I spiraled into one of the worst phases of my ED.

All I did was binge and purge. I barely even went to school. I was sad all the time.

Then, I got caught again.

The second time I got caught was by my older brother.

I wasn’t very close to any of my siblings, but my brother and I didn’t get along at all.

We would constantly fight, and I didn't understand why we hated each other so much.

During the heat of the moment in one of our fights, I made a snarky remark about his weight.

He replied, “I may be fat, but at least I don’t throw up every day.”

That’s when I realized I was now a part of my “crazy family.” I was no greater than any of them.

I was one of them.

I was better than them. I could control it and stop anytime.

I did this by choice, not by impulse. He didn’t know anything.

I didn’t want to stop just because my assh*le brother said something stupid. Instead, I would time my trips to the bathroom discreetly.

When everybody was asleep, I would take a shower and throw up then. When my parents weren’t home, I would go into their bathroom. I thought everything was fine.

Things turned around during my senior year of high school.

My grades were amazing, and I had a solid group of friends, not including the one who also had an ED.

I surrounded myself with positive people.

I didn’t want to be sad anymore. I had gained all my weight back, including some extra. I just stopped weighing myself. I didn’t look at myself in the mirror without clothes on.

But when my grandfather died and I started missing school again, the urges came back.

So I told my dad everything, hoping I could get some professional help before things got bad.

His response? “You wouldn’t be stupid enough to do something like that.”

Not only was I shocked, I was angered.

Stupid? Mental illness is not stupid.

Nobody is stupid for having a mental illness. I was not stupid.

I was mad about his response, and to this day, I have never received any professional help.

But I don't blame him for thinking the way he did. Although people learn about it in school, I feel we do not properly educate students on the matter.

We just characterize it as “wrong” and move on.

Especially with a family like mine, where you can’t really be open with each other, you try to lay low and be as normal as possible.

You can’t do something wrong, or else it will be gossiped about throughout your whole family tree.

Millennials try to find solace in knowing they are not alone by blogging about their lives. But instead of becoming a community of support, it has become a way to one-up each other.

This is why I am so glad that Mental Illness Awareness Week is going on right now. It gives people like me a chance to live a life where I feel I can be accepted as “normal.”

It reminds me I am not my ED. You are not your mental illness.