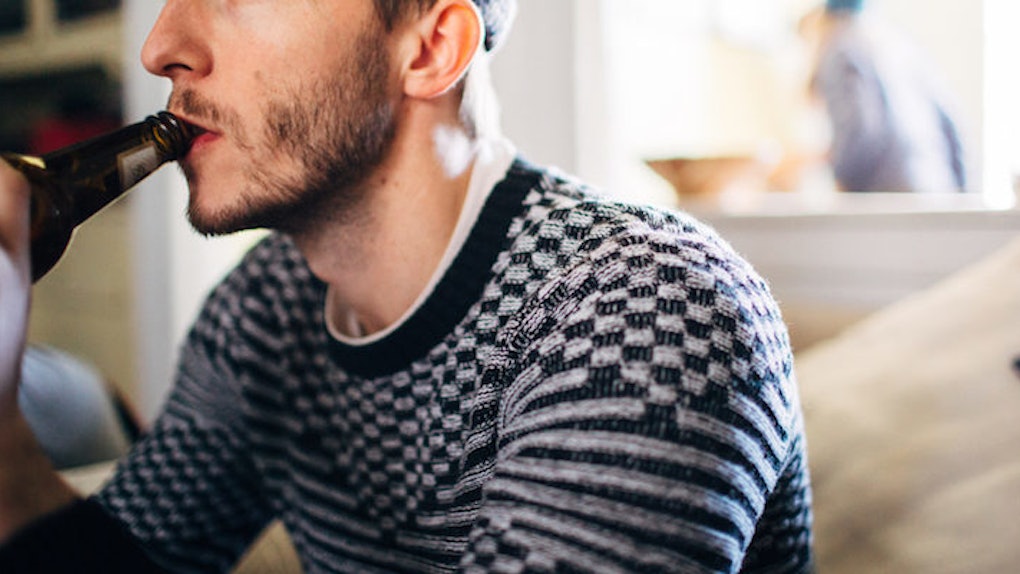 Not too long ago, there was a point in my life when I truly believed the only solution to any problem or bad feeling was cracking open a beer or making a mixed drink that was far too strong for my well-being.

A bad day at work turned into a night full of slamming back drinks until I felt numb enough to forget it.

A fight with someone close to me resulted in me plopping my ass on the chair of my balcony with nothing and no one other than a cooler by my side.

When I finally had enough in my system to fall asleep without any worry in the world, I'd wake the next day with a nagging headache and a horrible stomach ache, with no recollection of how I made it to my bed.

Deep down, I knew the sick feeling wasn’t just from the alcohol. But rather than face the issue, I’d replace the feeling with more alcohol.

I was in a place where, as a 23-year-old, I knew I shouldn’t be. However, nothing seemed to matter enough to encourage me to stop.

I didn’t need nights out on the town with my friends to get plastered. Instead, I did it alone, burying all the thoughts I knew I needed to face, but didn’t want to.

Day after day and night after night, I used alcohol as my release.

I relied on it to make me feel anything but the things I was feeling.

I reveled in the feeling of numbness that would overcome me when I’d have just enough alcohol in my system.

But that was the very problem: I could never have “just enough.” There was no stopping point.

While I was still standing after four back-to-back shots, my friends would lightly joke about how I was an alcoholic.

The very phrase made me laugh because I didn’t think they had any idea.

I thought I was hiding it pretty well.

They didn’t know it was the alcohol that made me smile for those group pictures that were only taken to accumulate as many likes on Instagram as they could get.

They had no idea I spent the first part of my day planning when I could start drinking.

When I’d go to the bar to order another drink even I knew I didn’t need, nobody stopped me.

Maybe they were scared. Maybe they really didn’t see I was using it as a release.

But here’s what I do know: Had they tried to stop me in that very moment, I would have been furious.

More than that, it would have driven me to drink even more.

I can’t say why, exactly. But I know the worst time to tell me I had a problem would have been when I was too drunk to care to admit my problem.

Looking back, it’s kind of hard to say exactly what made me stop.

Had I finally had enough hangovers?

Had I gotten sick of looking at the girl in the pictures who could only smile a fake smile when she was drunk?

Or had I finally gotten sick of looking at the pictures and not remembering ever posing for the camera?

Had I gotten tired of being so unhappy with my life, I felt drinking was the only solution?

The truth is, those long months are kind of a blur.

I wish I had a heroic story to tell you about how I finally came to the realization that I was not the person I wanted to be, but I don’t.

Here is what I can tell you: I didn’t have a friend or family member call me out on my problem.

Nobody said, “Hey, I’m really worried about you. You need to start taking care of yourself.”

Nobody took all the alcohol out of my apartment. Nobody kept me from going out and spending all my tips on shots I threw back far too quickly.

I quit for me. I made a choice.

I hated who I was, but more than that, I hated the fact I was hiding who I wanted to be behind my drunken stupor.

It’s difficult to say how I got to where I was.

I was unhappy with so many things in my life, and I regretted a lot of the decisions I had made.

But I was a coward. I knew becoming who I wanted to be meant making some big girl decisions, and I was too afraid to make them.

I knew making them would hurt people. But more so, I knew they would break me before they made me.

I wasn’t sure I could do that without relying on alcohol to get me through.

I’m no therapist, but based on my experience, the worst way to try to get an addict to stop his or her addiction is by forcing it.

After some time, it was easy to see in my closest friend’s eyes that she was worried. She didn’t have to say anything, and whether she knew that or was too afraid to, it doesn’t matter.

It was in her face.

I finally realized I was the reason for the grave look hiding in the creases of her eyes and soft smile.

I knew I needed to stop. Not just for me, but for her and for the rest of the people who cared about me.

I needed to stop for them.

I needed to stop for the aunt and uncle who suggested I spend some “alone time without alcohol” to figure out what I wanted in life, for the sister who kindly hinted I was throwing back my beers a little too fast and for the friends who were too afraid to ask if I needed help.

When you’re an addict lost in your addiction, you fail to realize how you are hurting others.

You fail to see if you push yourself too far, they’re the ones who are going to feel responsible in the end.

That’s probably what helped me turn away from it all.

I’ve never been a selfish person, but reveling in my addiction was an extremely selfish act.

I wasn’t only hurting myself. I was hurting the people who saw what was going on, but were too afraid to say anything.

But quitting your addiction needs to be done for you. You need to make the decision.

Nobody else can make it for you because then, it could only be a temporary fix.

When you suffer from addiction, you aren’t the only one suffering. The people who love you hurt, too.

They just may not always be able to tell you.

Find it in yourself to get the help you and your loved ones deserve.