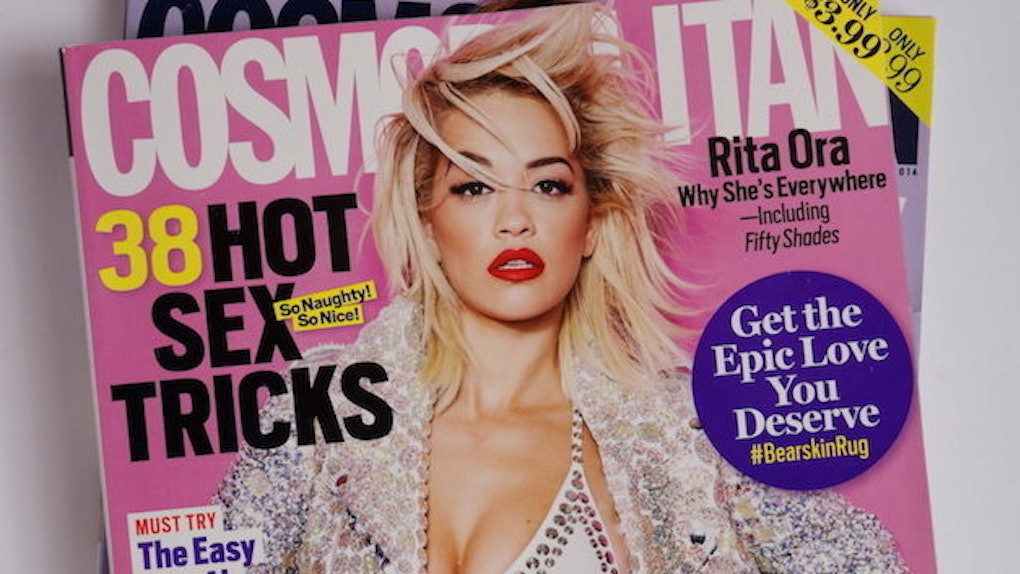 If you’re someone who, like me, stays up-to-date on media news, you’ve probably heard about the controversial Cosmo Harms Minors (CHM) campaign.

This crusade, which was actually started by the granddaughter of a major Hearst (the magazine’s parent company) executive, aims to prevent minors from purchasing Cosmo and wants the magazine brown-bagged.

Magazines that get brown-bagged are typically pornographic publications — like Playboy, for example.

The covers of brown-bagged magazines aren’t completely visible because they get slipped in a paper wrapper, which shields a portion— or sometimes all — of a given cover.

The supporters of CHM think we should treat Cosmopolitan, a women’s lifestyle magazine, the same way we treat pornographic ones.

However, it is not the sexual ways in which the cover models are often dressed that they view as problematic. Instead, CHM supporters seek to protest the headlines on the covers.

According to them, children should not be exposed to headlines about sex while they’re shopping with their parents in convenience stores.

Apparently, a few major drug store companies, including Rite Aid, are already on board with the plan and agree to brown-bag their issues of Cosmo.

Although, to some extent, I think childhood innocence should be valued, CHM's extremist views are totally out of line. Cosmo should definitely not be brown-bagged, and here’s why:

1. Kids won’t get offended by words they don’t understand.

The most striking headline on the August issue of Cosmo reads, "Simple Ways To Make Him Worship You."

As a child, this would have meant practically nothing to me. Even if the words were a little more vulgar, as a kid, I still wouldn’t be offended. If kids don’t understand what something means, how will it possibly affect them negatively?

Honestly, I think campaigning to shield children’s eyes from the models’ skimpy attire would be more convincing.

But, even that argument is void because the cover models are displaying confidence -- a trait all mothers should aim to instill in their children.

Studies show the “sex talk” gives both children and adults a fair share of anxiety. Not to mention the fact that nagging your kids about abstinence or imposing conversation about sex only makes things worse.

However, if your little ones see an interesting headline on a magazine rack, they’ll end up bringing the “sex talk” to you.

Magazines like Cosmo can open up the dialogue between parents and children and set kids up for a lifetime of healthy discussion and curiosity.

Let’s also not forget Cosmo is known for including text about career and beauty advice along with the sex-heavy print. These types of headlines can be fantastic conversation starters as well!

When kids notice a magazine cover is not totally visible, they assume the worst. Children have fantastic imaginations and reason that if something must be kept out of their view, it’s probably really bad.

In the case of Cosmo, what they would expect to see under the nondescript bag is likely way worse than what’s actually under there.

All in all, Cosmo should not be treated like the scary, pornographic monster that CHM is making it out to be. Being exposed to a few racy headlines will not damage your child.

Honestly, the text on their covers is likely more striking to you than it is to your kids. In fact, they might actually benefit from learning something new.