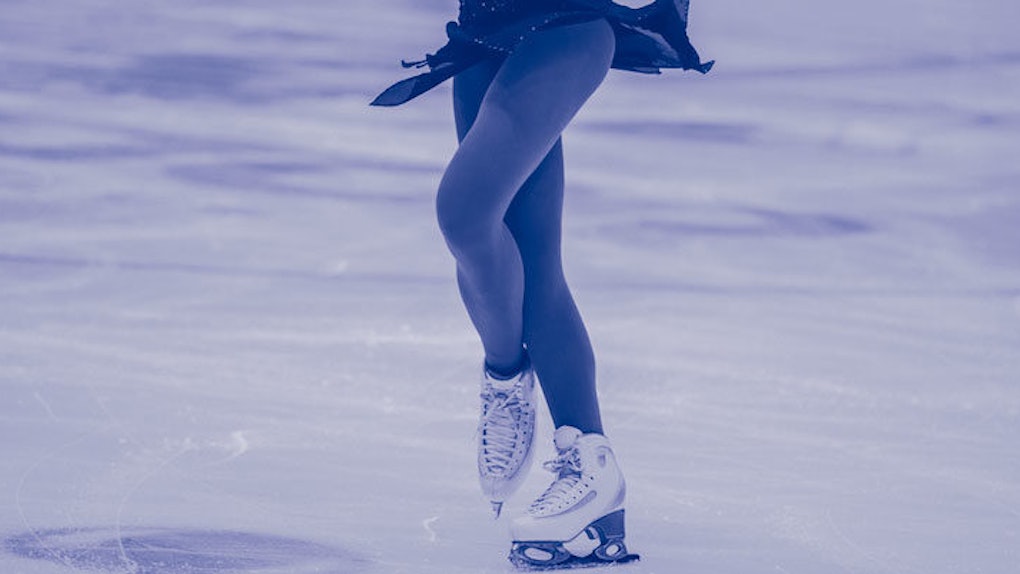 Some kids play lacrosse, and some choose drama club. For others, it's the debate team. For me, it was figure skating.

Between the ages of about 10 and 16, I was totally and completely engulfed in figure skating. It became my life. It's what I did after school, on the weekends and for fun. Not only was it fun, but it also became a stress reliever from whatever was going on in my life.

It was completely liberating and freeing to just skate. I would push my body to its limits and challenge myself to get that jump just right. I'd fall and get back up.

It's what led me to this post. I not only participated in competitive figure skating, but I also joined a production team where we put on themed performances. One year, we did a Jackson 5 theme (wigs and all). Another year, we did "Little Shop Of Horrors."

It was always elaborate, and I loved every second, from rehearsals to the anxiety right before going onto the ice. I even enjoyed the thrill of performing with a group of girls.

I also attended figure skating camp every year. Like I said, figure skating became my life. I didn't have real aspirations for the Olympics (I wasn't that good), but throughout those formative years, I am so thankful for those experiences and for all the beautiful and wonderful things they have taught me.

1. I learned the meaning behind true friendship and love.

As a part of the production team, I practiced weekly and almost daily with the same group of girls. All of us girls became a tight-knit family.

We saw each other regularly, almost more than we saw our friends from school. It was inevitable that we would get close. But, it was much more than friendship. It felt like genuine love. Those girls felt like home to me.

I can vividly remember how encouraging we all were of one another. When I was struggling with a jump called the axle, I remember a couple of my friends who had already mastered the jump went out of their way to help me. When I fell, they were right there to help me up and encourage me to keep going.

We would sleep over at each other's houses as a group, having massive sleepover parties regularly. Those girls will always hold a special place in my heart forever. Because the thing is, figure skating is grueling. It's physically and emotionally challenging. Having a support team beyond my parents was crucial for me, and it allowed me keep my sanity while pursuing a competitive sport. It constantly reminded me of my love for the sport itself.

2. I learned the power behind teamwork and collaboration with others.

It was super important to work as a team. If we wanted to win, we all had to do a good job. The team consisted of girls of varying skating levels and ages. So, it was up to us to know what was just challenging enough to do and what was maybe the limit of what others could do.

We couldn't make a little girl who had just started to skate do an element of the program that required more experience. We had to delegate responsibilities. We had to teach one another routines and work together, so that the finished product was seamless and looked effortless.

Then, as I got older and became a camp counselor, I became responsible for the young skaters. I had to watch over them, make sure they were being safe and tend to them if they fell or got hurt while on the ice.

4. I appreciated the power of acceptance.

This goes back to the friends I spoke about earlier. We were all different when it came to age, size, personality and even athletic ability. We all looked different.

Some were more athletic and enjoyed other sports. Others like me were a little less athletic, but a little more creative. Both strengths were needed to produce routines.

We were scored not only on technicality, but also on creativity. (Or as they liked to call it, production.) Even though I was bigger than my friends and also one of the older girls in the group, for the most part, I didn't feel any different. Those girls accepted me for who I was.

They looked past what I looked like and got to know me as a person. It's that feeling of acceptance that really showed me it was OK to be myself. I could appreciate my unique gifts.

5. When life knocks you down, all you can do is get right back up.

Falling will always be a part of figure skating. This is as it should be. I fell so many times, but I got up each and every time.

I remember when I was completely frustrated while trying to nail my axle. It was the hardest jump I had ever attempted. It required precision when it came to foot placement, and it also required more strength than any other jump I had attempted up until that point.

So, as you can imagine, it took me a long time to nail it. Honestly, I'm still not sure I ever really mastered that jump. But while I was working on it, I wanted it to come faster. I wanted to be like all my friends who had already mastered it. I couldn't stop beating myself up.

At one point when I fell, I just lay there. This was not because I was hurt; I was just frustrated. I didn't feel like I had the strength to get back up.

I thought, "What if I just quit right now? I can pack my sh*t and just go." But instead, a little voice inside my head kept telling me to just try just one more time. So I got up, took a deep breath and skated around to release some of my anger. Then, I began the lead-up to the jump.

I closed my eyes and just went for it. When I opened my eyes, I shockingly found that I was on my feet. My ass was not on the ice. I had just landed my first axle. That feeling will always be with me. Miracles happen when you believe.

6. Failure is OK. Setbacks are natural.

The unique thing about competitive sports is that there is one winner. Only one person can get the coveted gold medal. When a team gets second or third place, it doesn't sting as much as when you are solo. So, when my first solo competition came, I was nervous. I think I blanked out when I got out onto the ice that first time.

I messed up my footwork, which I had practiced religiously. It was actually one of the elements of my routine that I was the most confident in. Once I messed up, I was deflated. So, as you can expect, the rest of the program suffered.

I ended up in last place. Was I sad? Of course. I was 12. But, it taught me a valuable lesson. I learned to never let a setback get me down. A setback is not a failure. Setbacks are there to help you grow.

I kept thinking, "Could I continue doing this? What if I would never get good enough to win a medal?"

Luckily for me, I had the best, most supportive grandfather. He encouraged me to stick with it. It was the one and only routine he was able to see me perform in my short-lived figure skating career, and he even helped make my outfit. I couldn't let him down.

I pushed through, and eventually, I won a gold medal. So thank you, Grandpa Boris, for encouraging me to never give up.

7. I am stronger than I think.

I never thought I was really strong – emotionally or physically – until I began skating. I needed the mental strength to deal with losing a competition. I needed mental toughness while I constantly failed at attempting a new move. Seeing my friends who were younger than me accomplish great feats faster than me required me to not compare myself to them. I had to stay the course, my course.

There is so much more I have learned from figure skating. These memories are forever with me, and I get so much joy through remembering them. From the friendships that truly felt like family to the mental strength and toughness I gained, I wouldn't have chosen a different sport to pursue.

It wasn't the coolest or the most popular sport, but it was mine. It's the sport I chose. It shaped me into the woman I am today. I don't know how I would have handled all the setbacks that have happened in my life without my skating experiences. So, thank you to skating and to those girls. Thank you for shaping me into who I am today.