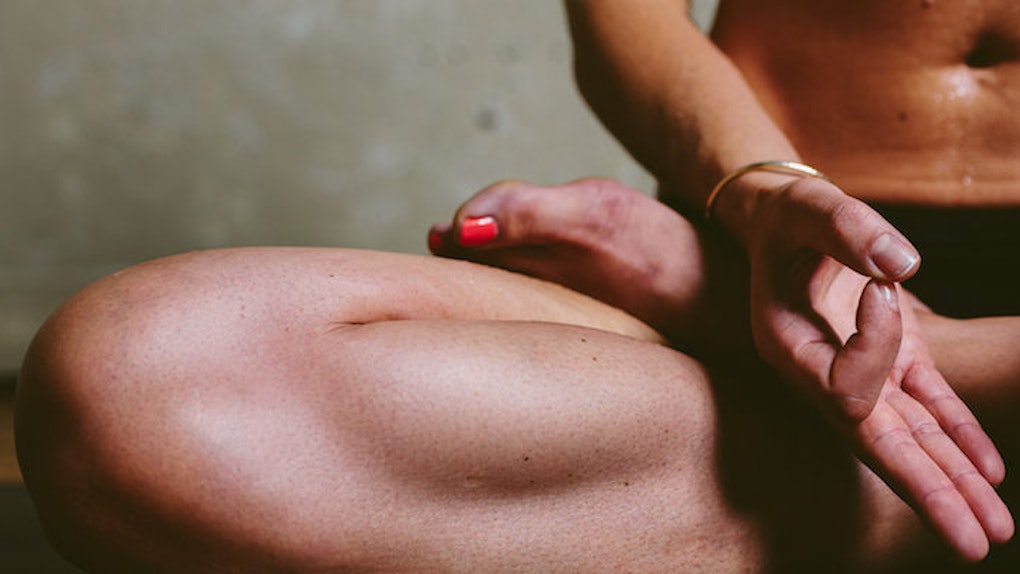 “So, is this your first time?” a naked, brown-haired man with a tattoo of a colorful peacock asked me as my naked body wiggled its way into a thong. As much as I tried to look away, I couldn’t avert my attention from his junk.

OK, that sounds weird out of context, so I’ll go ahead and put it in context for you: No, peaCOCK man and I did not just have sex. The co-ed, naked yoga session I had signed up for had come to an end.

These days, naked yoga is all the rage. It’s exactly what it sounds like: a bunch of people take off their clothes, gather in one room and practice yoga together.

Yoga is one of my most favorite forms of exercise. I love yoga, people and being naked (eh, you know what I mean), so I figured naked yoga was the next rational move.

Eventually, the fateful evening rolled around. One half-turn of a door handle led me to a lobby filled with men and women of varying ages and ethnicities, all butt-naked.

Nothing short of overwhelmed, I paced around for a few minutes, attempting to put off getting undressed as long as I could. But they were about to start, and I had to suck it up. And so I did.

I shed my clothing one piece at a time: tank top first, then bra, leggings and finally, my G-string. As each article of clothing fell to the floor, I swiveled left, then right, in a frenzy to make sure no one was staring at the food baby I was nursing or the thighs I so vehemently hate. I was nervous as hell, and I didn’t exactly do a good job of hiding it.

The thing was, no one was staring. Not one person.

I picked up my mat and walked into the yoga space. And just like that, I found myself in a half-dim room, surrounded by completely naked people.

I struggled to find space in the crowded room. I began to circle, and as the only one still walking around, I knew all eyes were on me. I wanted to dig a hole in the wall and tunnel my way through until I reached the Philippines.

“We’ll make space for you!” two middle-aged men chirped, almost in sync, as they scurried to create distance between their mats.

“Thank you,” I said, with a genuine smile. And I was thankful -- hell, relieved -- they were perceptive enough to sense my nearly palpable vulnerability.

As the class began, I scanned the room. There were all kinds of body types: fit and flabby, curvy and tiny.

It appeased me to know that along with our clothes, all judgments were left at the door.

The instructions for movement began. I was surprised at how quickly I went from feeling super uneasy to super comfortable. Butts elevated up from child’s pose and into warrior II, penises and vaginas dangling two feet in front of me, next to me and behind me.

Sandwiched between the older men, I watched wrinkly man-parts effortlessly sway, from chaturanga to upward-facing dog. Oddly enough, the men were in better shape than I was.

Body odor enveloped us. Eventually, I closed my eyes; it felt better to move that way. I decided to keep them closed -- and there was no freer feeling in the world.

An hour later, the class ended, and to my chagrin. As I lied in corpse pose, my hands grew limp. My thoughts ceased to stir. Sweat dripped off my body and onto the mat.

It wasn't just the calm I came to terms with -- it was also my body. I started class wanting to crawl far away and ended it literally hugging my body -- and not just because I was doing the “happy baby.”

We live in a world of meticulously crafted pictures and perfect illusions, of tight tummies and flawless figures. One scroll through my Instagram feed leaves me feeling like the ugliest, fattest person to walk this earth. And though we’re flooded with conflicting information -- the never-ending battle of fitspo versus “love the skin you’re in!” -- my smartphone makes it undeniably difficult for me to feel anything but insecure.

At naked yoga, though, everything was different. No one was made to feel small for being big. No one was without cellulite, stretch marks or scars. No one flaw on one person was better or worse than a flaw on person next to him or her. With our insecurities on display, we were the rawest, realest versions of ourselves, in a leveled playing field of imperfect nakedness. So, so naked.

And despite putting myself in a situation susceptible to silent judgment, I’ve never felt more confident about the body I have than in those moments.

Doing yoga naked forced me to look at the things I despise most about myself and find ways to embrace them. And for that reason, I've not only come to love naked yoga, I've come to love the parts of me I loathed.

As for the peacock man? I can't tell if he was trying to pick me up or just trying to make me feel at home, but my spidey senses tell me that it was a not-so-sly attempt at getting an up-close-and-personal look at Princess Jasmine, m'fair lady.

Oh, and just incase you were wondering, I’ll be going back. Doing downward dogs alongside a bunch of naked people is both a grounding and humanizing experience. One we could all use in a world of fun mirrors.