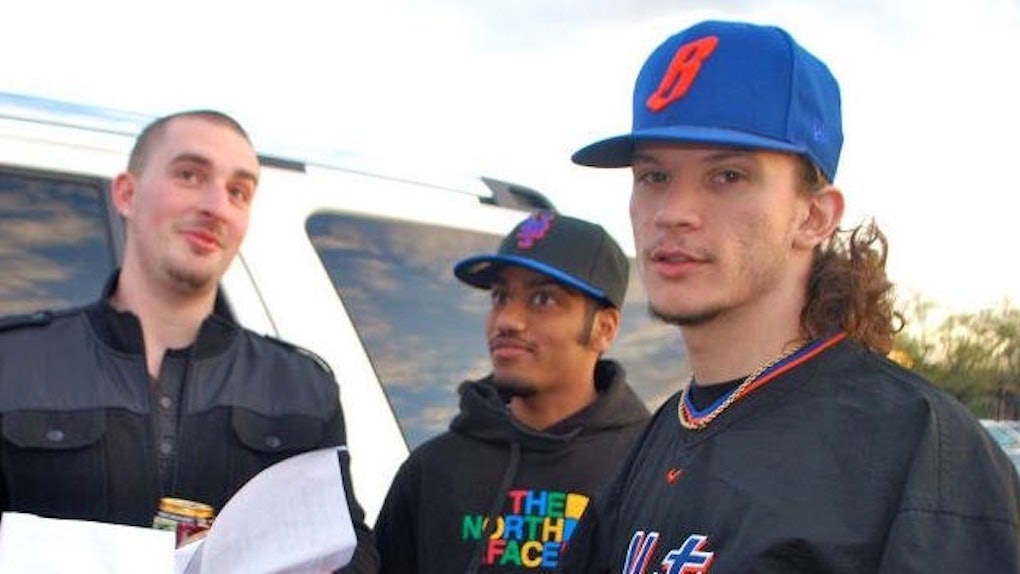 Braces Aren't Grills: What Your 'Ghetto Phase' Taught You About Life

Growing up, it's natural to go through a bunch of different phases.

Granted, these phases may have not stuck around for long, but still, it's important to try on a variety of different hats, if you will, before going forward with a style or identity that you feel personally comfortable with.

For some, this metaphorical hat may have been a gothic one -- one that was black, rebellious and, more or less, filled with studs and spikes.

For others, it might've been a skater phase, highlighted by VANS sneakers, or an "I only dress in generically colored V-necks from the GAP” phase, just the same.

And then, for the rest of us, there was a "ghetto phase."

The "ghetto phase," today, could easily be reflected back upon with regret, however, at the time, the suburban youth were just trying to emulate their favorite rapper role models.

We wanted the look, the style, and we had no idea what the word "appropriating" meant at the time -- so, as I'm sure you could probably guess, the byproduct was something cringeworthy.

Take it from me: The early 2000s were an awkward time.

So this is for the people who happened to find a du-rag while trying on hats as a youngster and decided to see if they could run with it. I hope you've learned your lesson.

If not, here are 8 basic things we learned about life after our "ghetto phase."

Sweatbands are best left in the athletic arena.

Truth be told, there really isn’t ever a dire need for sweatbands at any point in life -- unless you’re a professional basketball player or Guy Fieri.

So when we’d show up to our sixth grade algebra class with two sets of wristbands and an Allen Iverson shooting sleeve on, I’m sure we stirred up more questions than answers.

Yet we still did it despite the fact that it took 45 minutes to write 12 words on our AIM away messages -- and they were barely legible.

In a way, it was sort of a blessing in disguise, especially considering how the only thing more inexplicable than tYpInG LiKe tHis was a 12-year-old from the suburbs quoting Petey Pablo lyrics in the first place.

Baggy jeans weren’t as great a look as you had once thought.

I mean, if you didn’t own a few pairs of Phat Farm jeans that fit you like a tablecloth, did you even have a childhood?

I’ll leave that for you to decide, but, at the very least, you probably had a velour jumpsuit to pair with them.

No, any WWII-era European ghettos do not count as adequate justification for this phase.

Granted, I guess it is something of a loose term.

Still, I highly doubt anyone who says “ghetto” is referring to Poland in the 1930s, where your grandfather comes from -- at least not in the United States of America circa the 21st century.

I don’t care what anyone told you -- braces aren’t grills. They both may involve pieces of metal in one’s mouth, but they’re not the same.

Grills are grandiose, diamond-studded, custom jewelry for teeth that are handcrafted by cool guys like Paul Wall, for starters.

Braces, on the other hand, are sets of wire that are designed to help straighten crooked teeth (as prescribed by your dentist).

You never knew what the acronym FUBU stood for.

Although, admittedly, you probably had no idea what FUBU stood for -- you still draped yourself in it for the better portion of your middle school years.

Why? Because the majority of their items were made from silk -- and to this day, if it were socially acceptable, you’d still drape yourself in silk whenever the opportunity presented itself.

Yeah, there’s just something about big, plastic, dollar-sign-shaped pendants that screams “I stole this from a Bar Mitzvah.”

Nevertheless, whenever a misguided youngster would look for a little neck-swag -- or some bling bling -- he or she knew where to turn.

And, at the same time, everyone else in the room with that person knew where to turn away.

"Timz" are best worn when there's snow on the ground.

Once the Notorious BIG references you in a rap lyric, you sort of become a part of hip-hop culture by default. Timberland boots were certainly no exception.

Naturally, sometime shortly after Biggie admitted he liked "black Timz" -- on his record Suicidal Thoughts -- every kid from the suburbs also found themselves rocking Timberlands (but with shorts... in the summer).

Long Island, or Connecticut, or Central Jersey do not qualify as the “mean streets.”

They just aren't. Sure, these places may, in fact, contain streets -- and people on those streets might sometimes be "mean" -- but these middle class, suburban regions are far from what can be seriously considered "mean streets."

And, no, gated neighborhoods do not constitute the "hood."